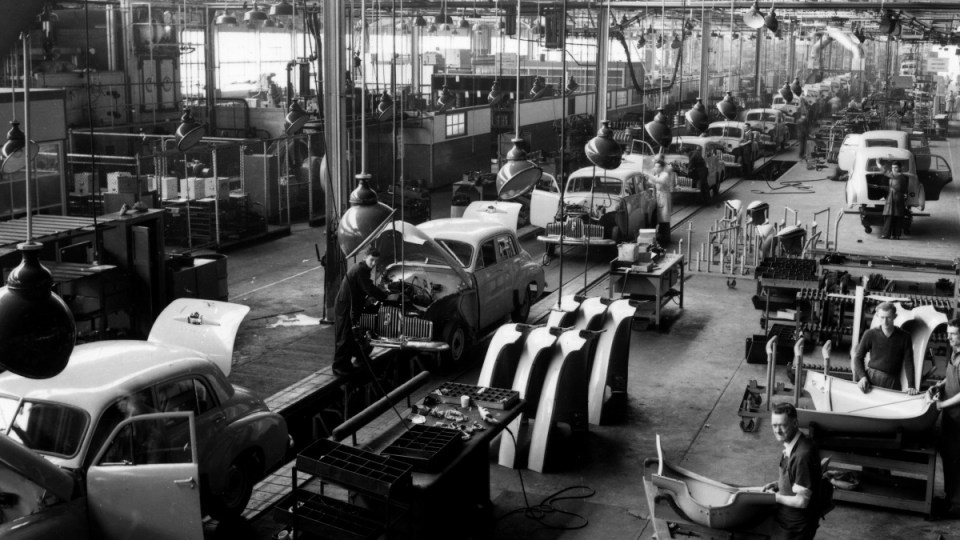 After more than 100 years, Holden will cease production in Australia. AAP
analysis

The closure of Holden’s production facility in Adelaide on Friday marked the end of car manufacturing in Australia. It was an emotional time and the symbolism was thick with reproach.

Australia without a car manufacturing industry is unthinkable for some. We have been mass-producing cars since the first Holden rolled off the assembly line at Fishermen’s Bend, Melbourne, in 1948.

The photo of then Labor prime minister Ben Chifley standing beside the gleaming “FX” Holden is as iconic as the car itself.

Emotions aside, the viability of the local industry, despite world-beating Australian innovation and ingenuity, has been in doubt for some time.

Australian car manufacturing depended on substantial government subsidies, and car-makers had become adept at squeezing the maximum dollar from governments.

The decision by the Abbott government to reduce the amount paid to car-makers was crudely executed, and it had GM Holden in its sights because it was playing hardball on announcing its plans for Australia.

“Either you’re here or you’re not,” bellowed former treasurer Joe Hockey in Parliament in a memorable fit of pique. “There’s a hell of a lot of industries in Australia that would love to get the assistance the motor vehicle industry gets.”

Detroit-owned Holden promptly decided that the answer was “not”. Toyota announced that it would follow suit. It closed its Melbourne plant in Altona on October 3.

Despite the antics of the Abbott government, it did Australia a favour.

Australia’s car-manufacturing industry had reached the end of the road. Motorists no longer place a premium on local manufacture. According to the Federal Chamber of Automotive Industries (FCAI), there are 67 car brands in Australia’s new-vehicle market. As of October 20, none is manufactured locally.

Attention can now be directed at what tomorrow’s economy will look like without a car manufacturing industry.

Unfortunately, every indication is that our policy makers have no idea. Nor do they appear even remotely inquisitive. The federal government shows no sign of having a coherent plan for the Australian economy.

Policy-making in Canberra is unimaginative, tentative and fatuous. Paul Keating’s rigour, clarity and daring are things of the past.

Australia’s fledgling clean-energy sector, with the right policy and regulatory settings, could be a world-beater. It has largely failed to make an impression internationally because of the absence of a national energy policy for the past decade.

As a result, much of the innovation and investment in clean-energy technology has happened overseas.

As for the Turnbull government’s last-minute National Energy Guarantee (NEG), the best the Australian Industry Group could manage was to commend the government on a “plausible new direction for energy policy”. This is not a harbinger of a dynamic new industry.

Not to be outdone, federal Labor’s promise to introduce a $1 billion Australian Manufacturing Future Fund, aimed at fostering an advanced manufacturing sector, sounds more like an “announceable” from ABC TV’s political satire, Utopia, than something Australian business actually needs.

The fund will take the place of banks which Labor claims are reluctant to lend to manufacturers wanting to move into “high-value manufacturing”.

It’s stirring stuff that presses all the right political buttons, and the goal of becoming an “advanced manufacturing nation” is laudable.

But what exactly will that look like? Labor is right – advanced manufacturing has enormous potential, but government becoming a quasi-bank in a sector which is barely understood has more red flags than a Communist Party congress.

Australia is incrementally making the transition to a digital economy in a new-world economic order that is still taking shape, in which technology will determine which jobs stay and go, as well as bring new jobs into being. Australia needs bold but considered economic policy, a vision that informs and paves the way forward.

But all we get is snappy slogans and catchy names. Judging by the latest offerings of the NEG and the Australian Manufacturing Future Fund, it would seem that as policy makers, our leaders make great copywriters.