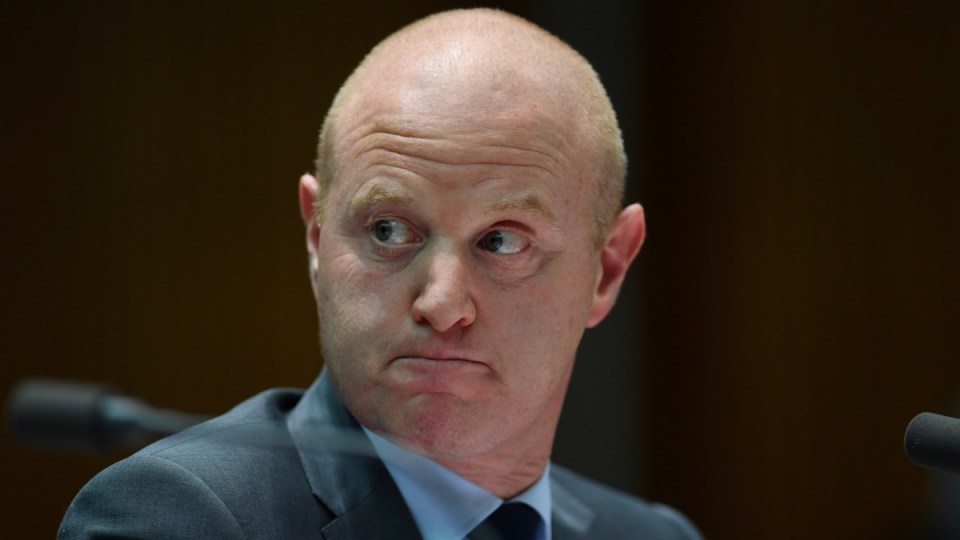 Mr Narev stood down as CBA chief executive after a horror year for the bank. Photo: AAP

The Commonwealth Bank has announced that CEO Ian Narev will retire by June 2018, as a money laundering scandal engulfs Australia’s biggest bank.

Mr Narev has led CBA to a series of record annual profits but has been under intense pressure for the past two weeks after AUSTRAC alleged the bank breached money laundering laws more than 53,000 times.

“In discussions with Ian, we have … agreed it is important for the business that we deal with the speculation and questions about his tenure,” chair Catherine Livingstone told the market on Monday morning.

“Today’s statement provides that clarity and will ensure he can continue to focus, as CEO, on successfully managing the business.”

In the immediate aftermath, Mr Narev had been adamant he would stay on.

Public pressure ramped up when he handed down a record full-year $9.8 billion profit last week. He has been at the bank’s helm since December 2011, through a storm of allegations and public hearings.

Before the announcement, the bank’s share price was still around $80, almost a full 3 cents down since news of the court case broke in early August – equating to well over $3 billion in market value. After the announcement, it soared to around $81.

The bank’s board has itself come under pressure for its handling of money laundering case, which is at least the fifth to rock the bank in recent years. Some analysts have called for board renewal.

The board’s first attempt at damage control was to slash short-term bonuses for executives to zero for 2016-17, and to cut their own directors fees by 20 per cent in 2017-18.

Ms Livingstone, chair for less than a year, said the “exact timing” of Mr Narev’s departure would be contingent on the outcome of a “comprehensive internal and external search process”. The Australian has reported the search for his replacement will be international.

Mr Narev’s unflappable manner of handling the intense scrutiny of CBA has earned him praise and ridicule, with some angered by his apparent coldness while others have been impressed by his ability to weather the storm.

He originally joined CBA in 2007 as group head of strategy, and had formerly consulted for the bank while at McKinsey.

The scandal that finally claimed Mr Narev, after repeated calls for his resignation, relates to accusations that CBA turned a blind eye to millions of dollars laundered through its ATM deposit machines by crime gangs.

The Australian Transactions Reports and Analysis Centre (AUSTRAC) launched civil proceedings against the bank in the Federal Court on August 3 for an alleged 53,700 “serious and systemic” breaches of money laundering and counter-terrorism legislation.

AUSTRAC alleged the bank let millions be deposited into thousands of its ATM deposit machines before it started to check if criminals might be misusing the machines – even after it “became aware of suspected money laundering” through its accounts.

The bank faces almost $1 trillion in maximum fines, although no experts believe a penalty of this magnitude is likely. Gambling company Tabcorp was fined $45 million earlier this year for money laundering breaches.

To defend against such an enormous fine, the bank is arguing that 99 per cent of the breaches were the fault of a single software update in 2012 that disabled the bank’s ability to report suspicious ATM deposits. If proven, it could reduce its liability down to $8 million for those breaches.

In 2012, the Commonwealth Bank rolled out thousands of ‘intelligent deposit machines’, which accept up to $20,000 in cash or 50 cheques at a time without requiring ID.

Courts have found that at least three separate crime gangs used these machines to launder millions of dollars.

Some analysts have said this latest scandal puts a royal commission into the banking beyond doubt.