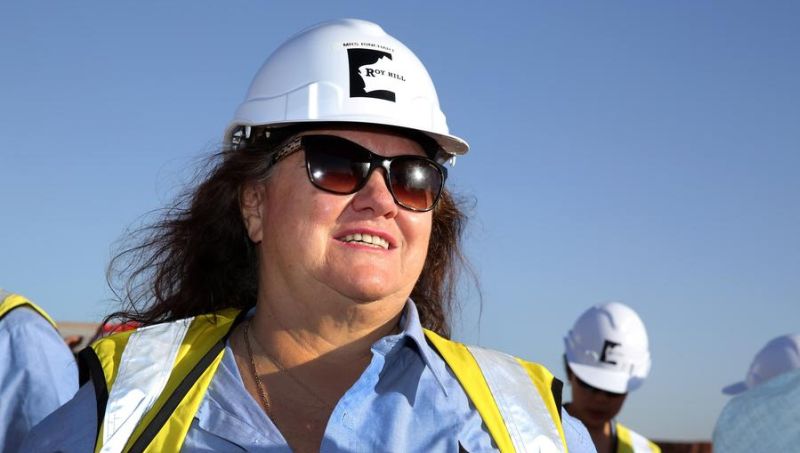 The iron ore rebound is sure to have Ms Rinehart grinning. Photo: Getty

The mini resources boom hasn’t helped workers but it’s been a huge windfall for Gina Rinehart, who, according to Forbes magazine, is once again our wealthiest Australian.

The magazine attributed this to Australia’s boom in exports of iron ore on the back of surging demand from Asia.

Ms Rinehart had the “best year” of any female billionaire on the list, but because her wealth is reliant on iron ore, “her fortune can either jump or plummet depending on the price of the commodity”, Forbes warned.

We have the third-weakest wage growth and third-highest household debt in the developed world. While soaring house prices are propping up the net worth of lucky home owners, they are making life very tough for first time buyers. Ms Rinehart was the only Australian to make the top 100, and one of only five Australian women listed by Forbes as billionaires.

Of the 1940 rankings, women claimed only 227 spots. The wealthiest was France’s Liliane Bettencourt, heiress to a large stake in cosmetics company L’Oreal, whom Forbes ranked 14th  in the world with $US39.5 billion ($A51.3 billion).

The newest Australian billionaire was Moose Toys CEO Manny Stul, who ranked 1468 with $US1.4 billion ($A1.82 billion). His company’s latest global success is the ‘Shopkins’ range — collectible toys and playing cards based on groceries and home appliances.

US President Donald Trump’s wealth reportedly shrunk to $US3.5 billion ($A4.54 billion) down 200 spots to 544th, because of a softening in the New York property market.

Microsoft founder Bill Gates maintained his world lead for the fourth consecutive year, with his estimated fortune growing from $US75 billion to $US86 billion (from $A97.3 billion to $A111.7 billion).

Warren Buffett, the legendary value investor, reclaimed second spot after a two-year hiatus. His net worth grew to $US75.6 billion ($A98 billion) from $US60.8 billion ($A78.9 billion), Forbes said.

Third place went to Amazon boss Jeff Bezos, who reportedly gained the most wealth of any billionaire on the list. His estimated net worth jumped to $US72.8 billion ($A94.5 billion), a gain of $US27.6 billion ($A35.8 billion) from last year.

However, this is all purely academic.

The annual Forbes billionaires list is based on data from February, so the rankings will have already shifted significantly.

Also, as pointed out by British journalist John Lanchester, rich lists are “good fun, but shouldn’t be taken too seriously”.

“There’s an entertaining difference,” he wrote, “between the kind of money that wants to hide from rich lists (mainly, old and inherited) and the kind that wants to feature prominently (mainly, new and entrepreneurial).”