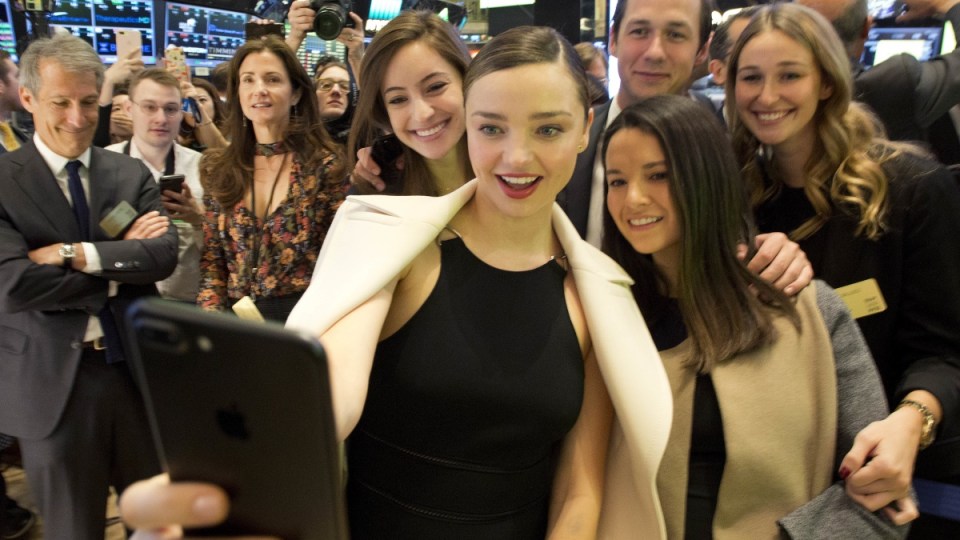 Miranda Kerr, who is dating Snapchat owner Evan Spiegel, attended the opening bell at the on Wall Street. Photo: AAP

The company behind Snapchat is trading sharply higher in its Wall Street debut, proof, that there’s investor demand for young but still unproven tech companies.

The company had priced its initial public offering of 200 million shares at $US17 each on Wednesday. That was above the expected range of $US14 to $US16.

Snap’s IPO was one of the most anticipated for a technology company since Twitter’s in 2013.

That, in turn, had created the biggest stir since Facebook made its debut on Wall Street in 2012.

Twitter is now valued at $US11 billion, while Facebook is $US395 billion. Snap’s pricing valued the Los Angeles company at $US24 billion.

Snapchat is best known for disappearing messages. It’s popular with young people, but growth has slowed in recent months.

That has investors wondering whether the company will end up more like Twitter, with its troubles attracting users and declining stock price, or Facebook, with soaring user numbers and stock price.

Thursday’s surge on Wall Street shows that there is initial investor excitement about Snap, but it’s not guaranteed to last.

Twitter, for one, soared initially after its IPO, but now trades 39 per cent below its IPO price.

Facebook, meanwhile, struggled initially but has since more than tripled its IPO price.