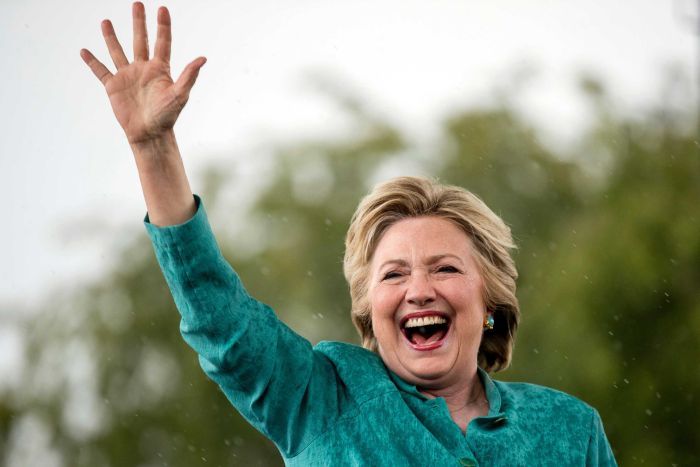 The stock market rally that followed news of the FBI’s all-clear to the latest bunch of contentious Hillary Clinton emails continued in the US overnight as investors’ spirits were boosted along with the hopes of the Democratic candidate.

The optimism comes on the eve of the US presidential election because Ms Clinton is seen as more supportive of the economic status quo whereas Republican contender, Donald Trump, represents uncertainty.

It follows market jumps in Australia and Asia on the back of the FBI’s decision not to prosecute Ms Clinton over a second tranche of contentious emails sent through her private server.

The Dow Jones Index put on 2 per cent, while the Nasdaq and the S&P500 both surged more than 2 per cent.

The markets at 8.15am Tuesday

Financial and health stocks led the gains on the S&P500 which had lost ground in the previous nine trading sessions because of election jitters, its longest losing streak since 1980 according to AP.

Online jewellery retailer, Blue Nile, jumped by one third to $US40.72 on the announcement the company is being bought by a private equity consortium for $US500 million.

Pharmaceutical companies, Biogen and Ionis Pharmaceuticals, said they had stopped a test for a rare genetic muscular disorder, spinal muscular atrophy, early because the trial was successful. 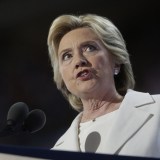 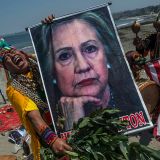 Clinton maintains slim lead over Trump in the final hours

The IShares MSCI Mexico ETF, known as the “Trump ETF” rose 5 per cent to 51.88. The index is viewed as a barometer for a Mr Trump victory because his policies are seen as negative for the Mexican economy.

The volatility index, the VIX, fell 17 per cent, its biggest one day fall since late June when Britain voted to leave the European Union.

“This is a reaction to less uncertainty,” he said.

“In those kinds of markets, people are jumping into stocks that they think are cheap. And what are the cheapest right now? Financials and healthcare.”

The Australian market looks set for a modest gain on the open after yesterday’s rally with the ASX SPI 200 Index up 0.2 per cent at 8.15 am.

Spot gold lost attractiveness as a safe haven as stocks and the greenback rallied on the news about Ms Clinton.

The Australian dollar jumped above 77 US cents overnight helped as markets anticipate a Ms Clinton win in the presidential election.

“The market is telling you they feel Clinton has the election in her sights and judging by the strong moves in healthcare [globally], the view is we see the Democrats take back the Senate and the Republicans retaining the House, although the race for the Senate in actuality is a 50/50 proposition,” IG market strategist Chris Weston said.

“Traders are focused on the outcome of the US Electoral College vote and while various estimates have been thrown around they all have Clinton wining, with anywhere between 274 to 322 seats (the victor needs 270),” Mr Weston said.

The greenback rose against major currencies, but fell 1.8 per cent to 18.67 Mexican pesos.