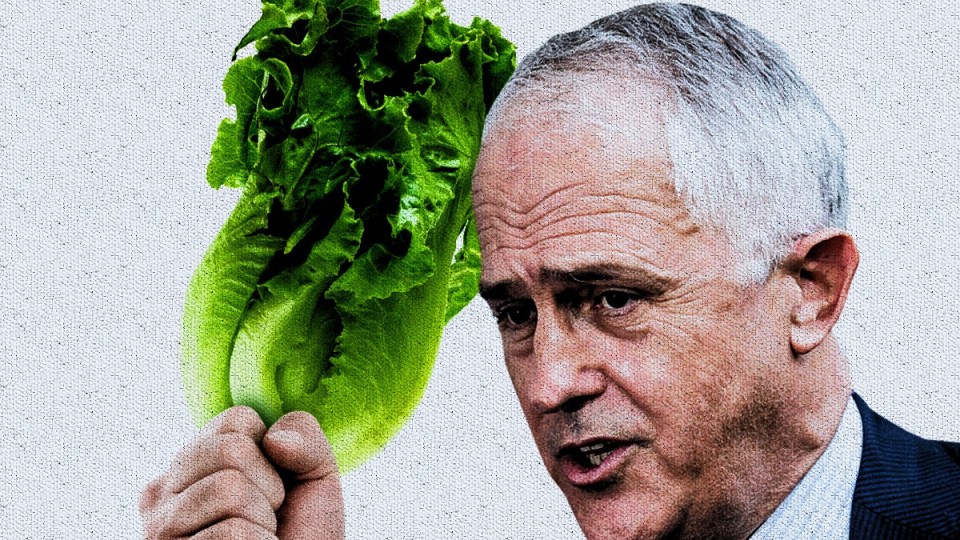 The banks copped a dressing down, salad style.

The Prime Minister has confirmed The New Daily‘s prediction that this week’s parliamentary hearings foreshadowed the creation of a national bank tribunal.

Malcolm Turnbull told Adelaide radio on Friday his government will legislate “a low-cost speedy tribunal to deal with these types of customer complaints against banks”.

It followed a string of rehearsed, Dorothy Dixer questions from three of the Liberals on the economics committee — David Coleman, Julia Banks and Craig Kelly — inviting the CEOs of the big four to agree with how wise and wonderful this idea was. They obliged.

Westpac CEO Brian Hartzer confirmed on Thursday, under sustained questioning from Labor’s Matt Keogh, that the PM and Treasurer Scott Morrison raised the idea with him and other bank bosses before the hearings.

This will fuel Labor’s criticisms that the hearings were an “alibi” for a royal commission, a “farce”, and as severe a penalty for misconduct as being thrashed on the wrist with a wet lettuce (one of Bill Shorten’s famous quips).

But like it or not, it must be acknowledged that a tribunal — and several other of the outcomes and findings of the hearings — will do some good.

Consumer advocates fear the tribunal will be more costly, more complex and more legalistic than the existing dispute resolution services, and will be used to quench support for a royal commission.

But, Australia does have too many financial dispute forums (four). Their powers are weak. And they cannot award sufficient compensation (the Financial Ombudsman Service can’t award more than $500,000 for personal claims). Advocates concede they should be beefed up and consolidated.

So, whether or not we like the tribunal idea, at least we’ll get a “one-stop shop”, as the Coalition is so fond of calling it. Perhaps we can take solace in the fact it will probably have more teeth and a bigger purse.

Liberal senator David Fawcett, one of the Coalition backbenchers who triggered the “evolution of thinking” that led to the proposal, said a tribunal does have some drawbacks, but should be more powerful.

“It’s fair to say the lowest impact in terms of cost, time and effort for an individual or small business is an ombudsman-type scheme, but often because there isn’t the same level of rigour, then the powers of that ombudsman are limited, whereas a tribunal tends to be given more powers,” Senator Fawcett told The New Daily.

“There’s a step up in complexity, but there’s also a step up in their scope to resolve issues that are contentious.”

It is atrociously difficult to leave the big four banks. Without competition, they’ll never learn from their mistakes. Thankfully, help is on the way.

Liberal chairman David Coleman pushed the banks hard on making it easier to switch. He said the current system had “completely failed and doesn’t work”.

This was a complaint made by several smaller institutions to the Financial Systems Inquiry in 2014. They would very much like to steal angry customers away from the big banks, but say the difficult process deters competition.

RFi Group, a banking and finance data firm, estimated in July that only 3 per cent of Australians had switched banks in the previous 12 months, and 62 per cent had never.

The current system is called ‘tick n flick’. It puts the onus back on your current bank to move all your direct debits and credits to your new institution. It’s supposed to be quick and easy, but Mr Coleman said the process often takes weeks.

Thankfully, one of the bank’s explained that the new payments system, coming in 2017, will make the process much easier.

Under the new system, all of our direct debits and credits for mortgage payments, rent, Netflix, etc  — the most complicated bits of switching bank accounts — will be linked to an “alias ID” (a mobile phone number or email address), not your account number.

“If you had a bank account with another bank and you came to NAB, you’d be able to go to the new payments platform, go to your alias ID and change your account number, so none of your direct debits or credits would be changed,” NAB chief operating officer Antony Cahill told the committee.

This was backed up by Reserve Bank governor Philip Lowe, who said back in September the new payment system will be “fantastic”.

Beginning of the end of bank donations

The NAB has gone cold turkey on political donations, and the ANZ is considering doing the same, perhaps because of the public scrutiny of the hearings, a push from the Australian Centre for Corporate Responsibility, or both.

NAB boss Andrew Thorburn told the committee on Thursday his bank had decided to stop all donations at the government level because it wanted to be “respected” and to ensure “our customers do not see conflict”.

“In the community, there are concerns around whether the banks are giving money to political parties for receiving particular hearings or benefits,” Mr Thorburn said.

NAB bank alone gave $1.5 million to Labor and the Liberals since 2007, according to Greens MP Adam Bandt.

A bit of good news from the ‘wet lettuce’ bank hearings