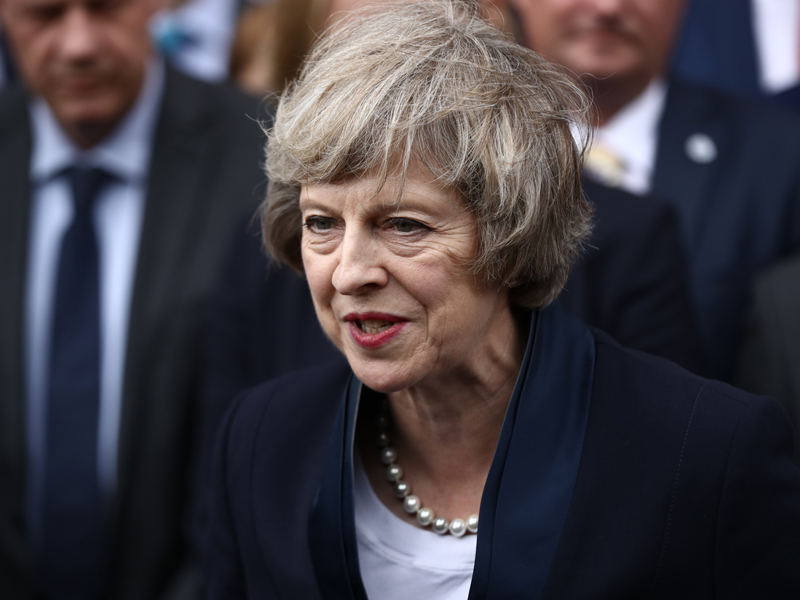 Theresa May has been battling to trigger Brexit on her own terms. Photo: Getty

British Prime Minister-to-be Theresa May is regarded as a steady hand in unsteady times, capable of healing ructions in the Conservative Party and stabilising market chaos.

Late on Monday night (AEST), her only remaining rival for Conservative Party leadership, Andrea Leadsom, withdrew from the race citing a lack of support.

Ms May garnered 199 votes to Ms Leadsom’s 84 in a party room vote and was the favourite to win the now-defunct party membership poll.

Current PM David Cameron quickly announced he would push forward the date of his resignation to pave the way for Ms May – and much-needed stability.

“Obviously with these changes, we now don’t need to have a prolonged period of transition,” he told reporters outside 10 Downing Street.

“So tomorrow I will chair my last cabinet meeting, on Wednesday I will attend the House of Commons for Prime Minister’s questions. And then after that I expect to go to the palace and offer my resignation.”

STOXX Europe 600, an index of 18 European stock markets, rallied on the day of Ms May’s announcement. It closed 1.6 per cent up at 332.72 points, its highest close since June 23, the day of the Brexit referendum.

The referendum devastated global markets and the British pound. The recovery has only begun. So it is fitting that Ms May has what one Australian expert described as an “excellent” grounding in finance.

She was an employee of the Bank of England from 1977 to 1983 and worked for the Association for Payment Clearing Services from 1985 until her entrance into the House of Commons in 1997. Her husband, Philip May, is a banker.

University of Western Australia professor of economics Richard Heaney told The New Daily he had a high opinion of Ms May’s credentials and was confident the full force of the adverse market reaction has already been felt.

“If you look back at her record, she does seem to be able to achieve things, and that’s all going to be required because there are endless amounts of contract negotiation and finding the right level after all these years where the UK has linked in so formally with the other European markets,” Prof Heaney said.

“You’ve already seen the market reaction. I don’t really expect to see much more happen. The FX [foreign exchange] rate was almost immediately depreciated and thank God for flexible exchange rates because essentially what that’s done is, everything else is pretty well sorted.”

As is expected for the UK’s second female prime minister, Theresa May has already attracted comparisons to Margaret Thatcher – and to other strong, competent female leaders such as German chancellor Angela Merkel and White House hopeful Hillary Clinton.

An Australian expert on UK politics, University of Adelaide professor Clement Macintyre, told The New Daily that as a quiet Remainer, who did not campaign vocally, she is well-placed to heal the divide between pro-Euro and pro-Brexit MPs in her party. But she also has a steely determination that makes her well-suited to tough negotiations.

“She has not alienated some of the most vociferous Leave campaigners with the exaggeration and hyperbole of rhetoric that was employed by people like Cameron and Osbourne,” Prof Macintyre said.

“And she’s somebody who, in a sense, nobody loves but everybody has a high regard for because of the quality of the work she does and the appetite for work and attention to detail.

“She’s certainly not one for sitting around in the bars making friends. She gets on and works. But I think most people see that as an admirable trait in a leader. And she’ll bring that same work ethic to the negotiations with EU leaders.”

Ms May has ascended from Home Secretary to No. 10 without a divisive general election and largely dodged a schismatic leadership contest. So much the better for stability.

But the path to Brexit is yet unclear.

She is yet to put forward a full exit strategy, apart from promising to negotiate “the best possible terms”. She has emphasised that access to the EU single market is one of her priorities, especially: “the right deal for the UK in terms of financial services.”

The single market aims to guarantee the free movement of capital, as well as goods, services and people.

Chancellor Merkel made it clear during a media conference on Monday that the EU would not bend its rules to allow the UK to access the single market, while also curbing immigration – a pledge made by many Brexiters.