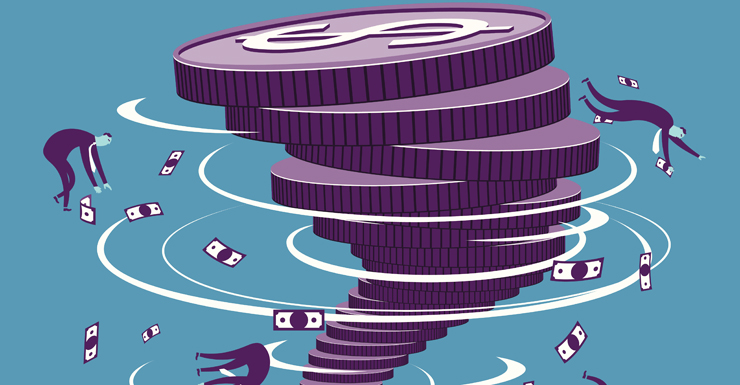 Fear and loathing has been let loose in the finance markets following Britain’s vote to leave the European Union.

There was initial panic following the unexpected Brexit vote, with European share markets losing nearly 10 per cent in the first two days after the June 23 vote.

British markets were more sanguine about the country’s decision, falling less than half that amount.

For the average punter, post-Brexit panic could have seemed like a beat-up. After all, markets had regained much of their lost ground a few days on.

But don’t be fooled: there are some nasty things stewing in the finance world in Europe.

And the smart money people are hunkering down for a financial storm.

Sterling, as the British currency is known, is on the slide. It’s at a 31 year low against the greenback, being worth $US1.3035.

Against the Aussie dollar, it has fallen by 18 per cent since the start of June, with the Aussie buying 57.59 British pence compared to 48.15 pence just over a month ago.

That shows investors aren’t too keen on holding UK assets.

With London tipped to lose at least some of its cache as one of the top world financial centres, there are concerns over the value of commercial property there.

So grave are those fears that three of the country’s biggest property trusts have temporarily stopped allowing investors to take their money out.

The largest, M&G Investments, is valued at £4.4 billion ($A7.65 billion) with Standard Life’s fund valued at £2.9 billion and Aviva Investors Property fund worth £1.8 billion. Together they make up one third of the value of Britain’s property trust sector.

M&G blamed the “high levels of uncertainty” linked to the UK’s vote to leave the EU for the move. The suspensions of redemptions are pre-emptive measures designed to prevent a run on the trusts which in turn could force them to sell properties to pay back investors, triggering a property collapse.

While general stock markets may have recovered, the banking sector is under pressure across the developed world.

For recession-mired Greece, the figures are even worse with some banks down as much as 40 per cent.

The big fear around European banks is that Brexit “could cause a domino effect of other countries leaving”, AMP chief economist Shane Oliver told The New Daily.

“The Brexit vote and its aftermath shone the light on the vulnerable parts of the EU,” Mr Oliver said.

The concern with the banks is two-fold. If weaker countries leave the EU, then their sovereign debt would be devalued and European and UK banks that hold their bonds would lose money.

The second part of the conundrum is that as bank share prices fall, it becomes harder for them to raise the capital they would need if they were hit by losses. The spotlight most recently is on Italian banks.

Seventeen per cent of Italian bank loans are bad, according to a recent report. That figure, which equals 360 billion euros ($US401 billion), is more than three times ratio of the bad debts in US banks at the height of the GFC.

The Australian banks have been caught up in the fall, with Commonwealth Bank and Westpac down around 9 per cent since the start of June, while the overall market is down only 3.5 per cent.

The other indicator that shows what the smart money is really thinking is government bond prices. There has been a stampede into these assets, which are seen as very secure, as investors sell down equities and related investments.

As bond prices are bid up by investors eager for a safe haven, the yields on the bonds fall correspondingly. “Yields on government bonds in Australia, the US, France, Germany, the UK and Switzerland are at all time lows,” fixed interest strategist with JBWere, Laurie Conheady, told The New Daily.

So much in demand are bonds that European bond yields are well below one per cent in most markets and in are even negative with the German 10 year bond yielding -0.18 per cent.

Chill winds of the global financial crisis are back