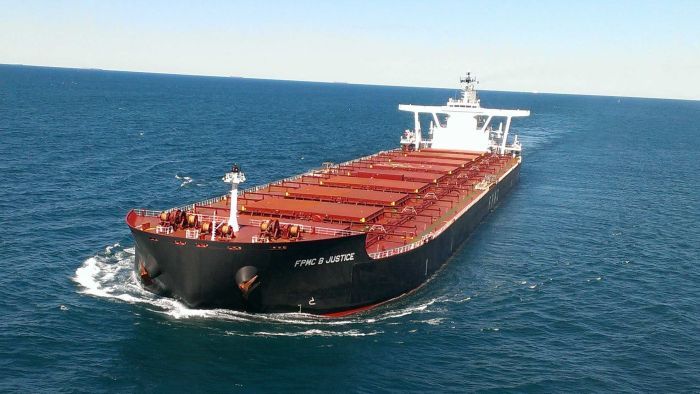 Robert Bantol was reported missing of an iron ore carrier 80 kilometres off the Australian coast.

An international marine union is calling on the Australian Federal Police to investigate the disappearance of a Filipino worker from an iron ore bulk carrier off the Pilbara coast last month.

The Spring Hydrangea was in international waters 80 kilometres north of Dampier on its way to China when the captain reported a member of the crew missing on Saturday April 30.

The sailor, named Robert Bantol, was last seen aboard the ship at 10am, but was reported missing overboard to the Australian Maritime Safety Authority (AMSA) shortly afterwards.

After searching the surrounding ocean by air and sea, AMSA abandoned the search at the end of the weekend, concluding based on medical advice that the man could not have survived.

Under current laws, the obligation for further investigation into the man’s disappearance rests with the ‘flag nation’ of the ship, or the country the ship is registered in.

The Spring Hydrangea is registered in Panama, a popular flagging nation for freight ships worldwide.

But union official Dean Summers told the ABC he has spoken to the family of the Filipino father, and they want an investigation by Australian authorities, because they believe it might prompt the company running the ships to tell them more about the disappearance.

“The family are saying that they spoke to him a few days before [the disappearance], he was OK, there were no problems, he was a young man with a son and wife he was looking forward to getting back to,” Mr Summers said, Australian coordinator of the International Transport Workers Federation.

The family also claimed that Mr Bantol’s phone was “activated” some days after he had disappeared from the vessel, and they do not believe he would have jumped overboard, according to Mr Summers.

“He’s a strong Catholic and so the last thing they thought he would do was to jump over the side of the ship.”

Chaplain Ian McGilvray, who works to support crews that dock in the Pilbara through the Dampier Seafarer’s Centre, has also spoken to the Bantol family.

“The family would just like to have closure, and to be able to find out what has happened to Robert, if anything untoward has happened to him … they all appreciate, having sea in their blood, that things happen,” Mr McGilvray said.

As the Spring Hydrangea has been sold to new owners since that trip, and the crew on board disbanded after arrival in China, Mr McGilvray believed it could now be very difficult to run a full investigation into what happened.

“I think the loss of any seafarer needs to be investigated. Every year, hundreds of seafarers go missing, and they need to be all investigated. But we know it’s sometimes not practical,” Mr McGilvray said.

A series of three deaths on board a Panama flagged ship in 2012 is currently the subject of a NSW Coronial investigation.

A Senate inquiry was recently held into the increasing use of “flag of convenience” shipping, where ships are registered in a different nation to the company operating them.

In an interim report, the committee recommended the Government look for ways to make flag of convenience shipping more accountable to international law.

“It’s a human being that’s gone overboard for crying out loud, it’s not that far out of Australia’s waters. We just can’t treat these seafarers as disposable and say ‘nothing to see, move along,'” Senator Sterle said.

Federal Justice Minister Michael Keenan’s office told the ABC that it is up to the AFP to determine what cases they choose to investigate.

The Australian Federal Police told the ABC they were not involved in the matter.

The Australian Safety Transport Bureau and WA Police have both confirmed they are not investigating the disappearance.