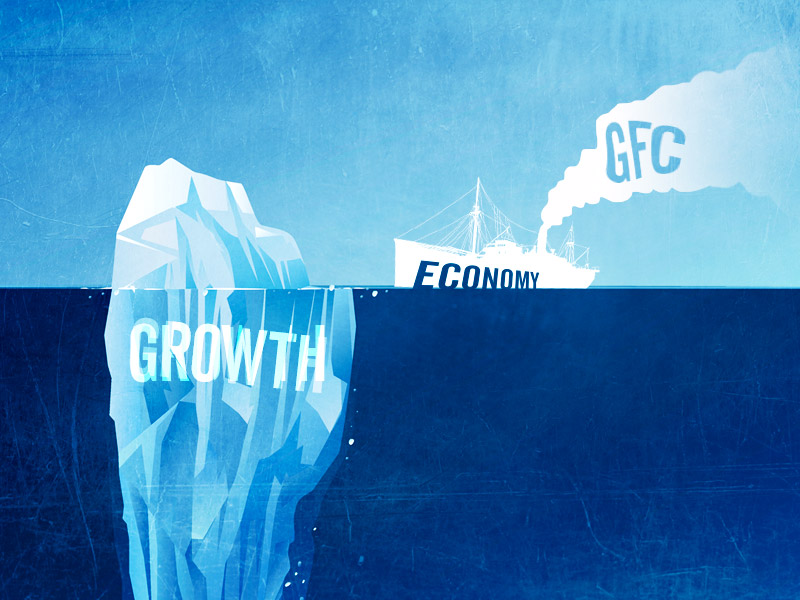 Australia has gone from the stand-out economy through the global financial crisis (GFC) to the worst performer in terms of growth trajectories among the world’s wealthiest nations, according to new data.

The Organisation for Economic Cooperation and Development (OECD) figures for the last quarter of 2015 show exactly how the economy is performing in relation to the rest of the developed world during a period of global recovery. And the answer is: surprisingly badly.

Yes, government debt increased, as it did in 32 of the 34 OECD countries. But not by much.

Now, everything has changed and Australia’s economy has gone from rooster to feather duster, ranking as the worst performer in the OECD in terms of direction and growth trajectories through a range of key variables during the current global upswing.

Australia is the only member country not to record improvement over the last two years in any of those six key indicators of economic wellbeing and it alone has seen deterioration in five of those six.

• Mouse over the graphs below for more detailed statistics

At the time of the 2013 election, Australia’s unemployment rate was 5.6 per cent, ranking 7th in the OECD, behind Norway, Switzerland, Mexico, Germany, Japan and South Korea.

The figure is now higher at six per cent, a situation shared with only five other OECD countries – Turkey, Norway, Austria, Switzerland and South Korea. Australia now ranks 14th in the OECD on jobs. The unemployment chart for the UK, shows a steady improvement since 2013. Australia’s trajectory has been the opposite.

Australia’s gross domestic product (GDP)  grew 0.6 per cent in the December quarter of 2015 compared to 0.8 per cent for the last quarter of 2013, putting it on a list of 16 slipping countries.

Germany is the only other rich country where productivity has fallen in the last two years.

Balance of trade: disastrously down

Of the 34 OECD countries, 12 have maintained a reasonably steady balance over the last two years, 14 have seen their balances improve and eight have experienced a deterioration. Of those eight, Australia is the worst performer, experiencing its worst ever deficit in April 2015 with June and December also rating among the lowest.

Norway and Switzerland were the only OECD countries not to increase borrowings when the GFC hit in 2008. All other governments accumulated debt until 2012 or ’13.

Thereafter, debt levelled off in seven countries – Belgium, Estonia, Greece, Italy, Mexico, Portugal and the UK. Fifteen well-managed countries began to repay their debt and now have lower levels than in 2013. The remaining 11, including Australia, are still piling on the debt and it is expected to get worse.

Missing out on the recovery

No country has improved on all six variables over the last two years.

The outstanding economy is Ireland which improved on five variables, missing out only on wealth. Next were the Netherlands, Italy, New Zealand, Israel, the Czech Republic, Poland, Hungary, Luxembourg and Slovakia, which improved in four areas.

Only Australia failed to improve on any of the six variables and record deterioration in more than three areas.

That is more than for the same period the year before and compares with $28.25 billion added in the entire last Gillard/Rudd year.