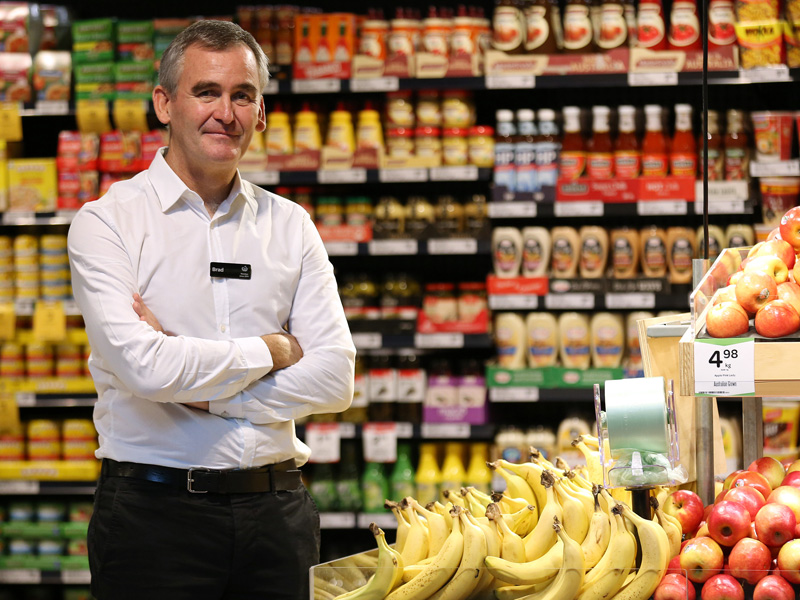 It’s been a tough couple of weeks for supermarket giant Woolworths. Just a few days ago it suffered the ignominy of reporting a $972.7 million loss resulting from the $3.2 billion write-off of its Masters hardware disaster.

Following hard on the heels of that came rating agency, Moody’s, which took the axe to its credit rating, cutting it down one notch to Baa2 with a negative outlook.

That’s the second downgrade since August when its rating sat at A3, where Coles is now with a stable outlook.

“It’ll take a couple of years to turn the company around; its a very complicated job,” Mr Kierath said.

Woolies has been hit by a triple whammy of retail problems.

“Coles has done better, Aldi has grown strongly and Woolworths has made cuts which have hit the numbers of staff and service in the stores,” Mr Kierath said.

Brian Walker, principal of the Retail Doctor research group, said Woolies has gone from rooster to feather duster this decade.

“Five years ago it was the incumbent super market group in Australia,” Mr Walker said.

“Then they got diverted spending money and management time on other lines of business, like Masters, which were unsuccessful.

“At the same time, Coles got its act together under Wesfarmers [which bought the retailer in 2007] and Aldi came into the market.”

That competition from Aldi has been so strong that retailers in Adelaide, where the German group is opening its newest stores, describe a “blast zone” of competition for anywhere within a 10-minute drive from a new Aldi store.

“Aldi’s come from almost nowhere to take 14 per cent of the market in four years,” Mr Walker said.

According to Moody’s, Aldi has 373 stores in Australia and is going to boost this dramatically with 60 new stores this year. Twenty will be in South Australia, 20 in WA and another 20 in the eastern states.

Aldi has earmarked $750 million in new store openings in the next few years and even Moody’s is surprised at its ambition.

“This increase to around 60 stores from our earlier expectation of 35 stores translates into 71 per cent more store openings than we had forecast for 2016,” Moody’s said in its assessment.

“If the company follows a similar plan in 2017-18, it would imply that Aldi has shortened its planned rollout of the 120-130 stores for Western Australia and South Australia to three years from the five years we had expected.”

Consumers are winning big time with the Aldi move. Moody’s said cutting prices to match Aldi has cost Woolworths $350 million and Aldi’s pledge of cutting prices by 1.7 per cent a year is being upped.

The worry underlying Moody’s move to cut Woolies yet again is the fact that its earnings are falling along with margins and earnings-per-store while its debt is not falling.

That squeezes profits and makes the lenders who pay Moody’s for its rating work feel nervous about getting their money back.

The future will see more competition not less. Mr Walker said another German group, Lidl, “plans to come into the market and will use an Aldi-style model”.

Moody’s isn’t upbeat about Woolworths in the near future.

“A rating upgrade in the next 12-18 months is not likely,” the report noted.

In fact, if things worsen another cut is on the cards.