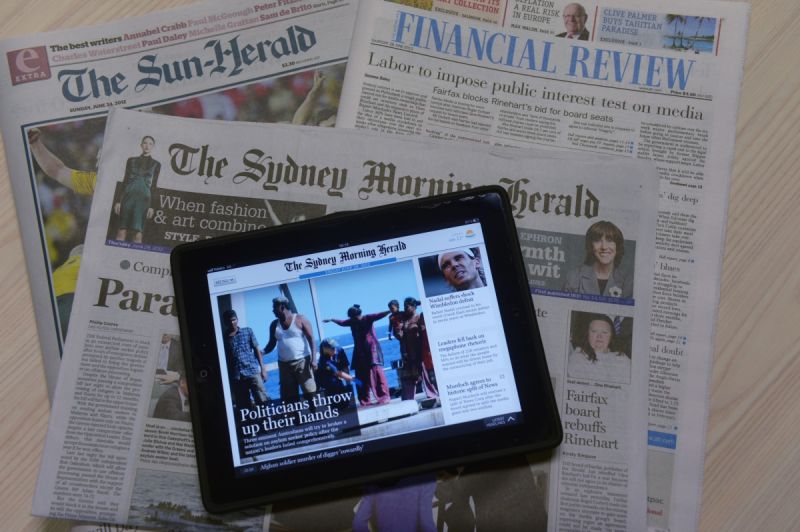 Fairfax Media has taken a further step towards closing down its weekday newspaper production with the announcement of another restructure, its third in four years, and the departure of Andrew Holden, Editor-in-Chief of The Age.

The media group’s Editorial Director, Sean Aylmer, explained the latest restructure across its two major metro mastheads The Age and the Sydney Morning Herald (SMH), as being designed to “simplify newsroom workflows and allow reporters and editors more autonomy to better manage their workflows and create content to meet the 24/7 demands of our audiences”.

“I don’t think there’s any doubt about that,” he told The New Daily.

Fairfax is moving to a more digitally-based business model but “digital revenues are not compensating it enough to support the change”, he said.

Bruce Guthrie, former Editor of The Age and Sunday Age, and current Editorial Director of The New Daily, said the foreshadowed changes suggest further “erosion of The Age’s editorial independence and authority in favour of Sydney”.

“Many will also see them as further proof that Fairfax can’t wait to get out of print.

“At some point management might tell readers, staff and investors exactly what is planned. They deserve to know.”

Mr Holden has been replaced by former Sunday Age editor Mark Forbes as Acting Editor-in-Chief but some in the industry believe that SMH Editor-in-Chief Darren Goodsir will add the top job at The Age to his existing duties.

The news comes just days after Britain’s Independent announced the end of its print editions, with the publication to move to online only, making 75 journalists redundant. It also comes only a month after fellow UK publisher The Guardian announced cost cuts of 20 per cent.

A number of European and American newspapers have also gone to digital-only publishing on weekdays or, like the Independent, seven days a week. Fairfax has been tipped to cut weekday print publishing for some time.

The move to a more digitally-focused production is driven by catastrophic drops in newspaper circulations across the industry which, as the chart above shows, are continuing.

The group put a paywall around its online output in mid-2013 to try to replace newspaper cover price revenue with online subscriptions.

But the growth of online subscribers seems to have stalled. At the SMH in the year to December, digital subscriptions grew only 1.5 per cent while at The Age they actually fell 1.5 per cent.

“It appears the move to digital is flatlining. There’s no growth there and if anything it’s dropping off,” Mr Cox said.

Even if advertisers do make the switch to digital, the margins there are very small.

Part of the restructure involves rejigging the company’s sub-editing effort, which has been slashed and outsourced in recent years. The move threatens the jobs of around 70 New Zealand sub-editing staff.

Fairfax plans to outsource the jobs to the Pagemasters editorial contracting group in both Australia and New Zealand. The move appears to be motivated both by concerns about quality and an attempt to cut production costs.

Sub-editing was outsourced to Pagemasters in Australia in 2012 before being moved to Fairfax’s New Zealand operations in 2014.

Fairfax said it would negotiate with staff over the next 10 days about how best to implement its internal operational changes.

Mr Aylmer described the new operational model as based on “recently announced newsroom structures of The Wall Street Journal and Daily Telegraph”.

Fairfax, which publishes the Australian Financial Review and a range of regional and suburban papers as well as the two major metro mastheads, has cut 1900 staff in recent years.

Fairfax’s move of sub-editing to New Zealand has been unpopular.

Critics say it has been accompanied by a jump in the number of editing mistakes which have included running stories twice in one edition and running headlines in the paper that are simply instructions to sub-editors to add a headline.

Reporting staff were also said to be dissatisfied with the New Zealand sub-editors’ lack of local knowledge.