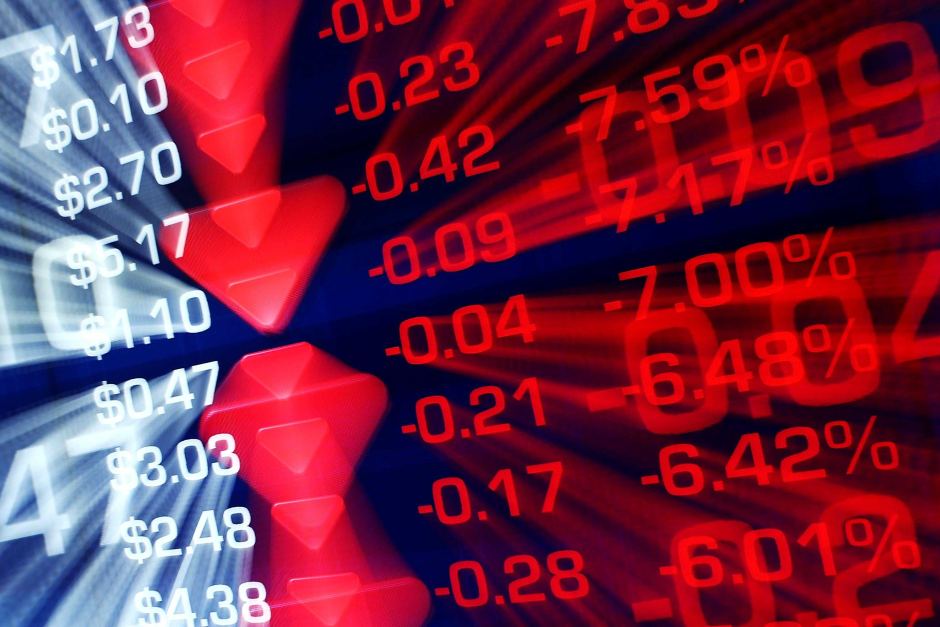 The Australian share market has suffered its biggest one-day fall since September, shedding around $42 billion in value.

Banks were the biggest losers on the market, with the financial sector index down 4.1 per cent.

The largest fall in the sector was for one of the smaller players, Bank of Queensland, which dropped 8.1 per cent to $11.66 on a warning that market volatility was increasing its funding costs and putting pressure on profit margins.

However, the big four also got walloped, with Westpac slumping 5.2 per cent, NAB 4.8 per cent, the Commonwealth Bank 4.6 per cent and ANZ 4 per cent.

Investment bank Macquarie was also down 4 per cent, amid a global rout for banking stocks.

Regional institution Bank of Queensland slumped 6.6 per cent after warning of funding pressures and a corporate restructure, while Bendigo and Adelaide Bank was down 4.4 per cent to $9.83 and investment bank Macquarie was off 3.9 per cent to $60.73.

The energy sector was also being sold off after West Texas crude plunged back below $US30 a barrel overnight.

The rare winners on Tuesday’s market were mainly gold miners – Newcrest was up 8.25 per cent to $16.80 after spot prices rose again to $US1191 an ounce, the highest prices since June.

JB Hi-Fi also bucked the downward trend, rising 1.3 per cent, following its report on Monday of a 7.5 per cent rise in first-half profits.

IG’s chief market strategist Chris Weston said markets are being pummelled on serious doubts about the outlook for the global economy and strength of major financial institutions, such as Deutsche Bank.

“For those who have traded the overnight move it almost feels like something big is brewing, similar to August 24 and the quasi-flash crash capitulation move we saw,” he cautioned.

“These markets need a strong shake up and sharp downside move, followed by a wave of buying to settle things down, but until that comes there will be no clarity, absolutely no confidence and a bucket load of concern.”

“There is something of a unifying theme throughout the markets around the world. That is why the domestic banks are under such pressure.”

The Australian Stock Report’s head of research, Chris Conway, agreed that something nasty is brewing.

“Without being dramatic, this feels a little different. The S&P 500 closed below key support at 1870 in the US overnight – an extremely important technical level,” he wrote in a note after the local market opened.

While much of Asia is closed for the Lunar New Year holiday, Japan’s Nikkei had slumped 4.5 per cent shortly after midday (AEDT), with US dollar weakness pushing the yen to its highest level against the greenback in more than a year, a big blow to Japanese exporters.

The Australian dollar had managed to resist the equity market and commodity sell-off overnight, but started falling close to midday, reaching 70.4 US cents despite US dollar weakness.

The local currency had slumped to 62.8 euro cents, 81 Japanese yen and 48.7 British pence.