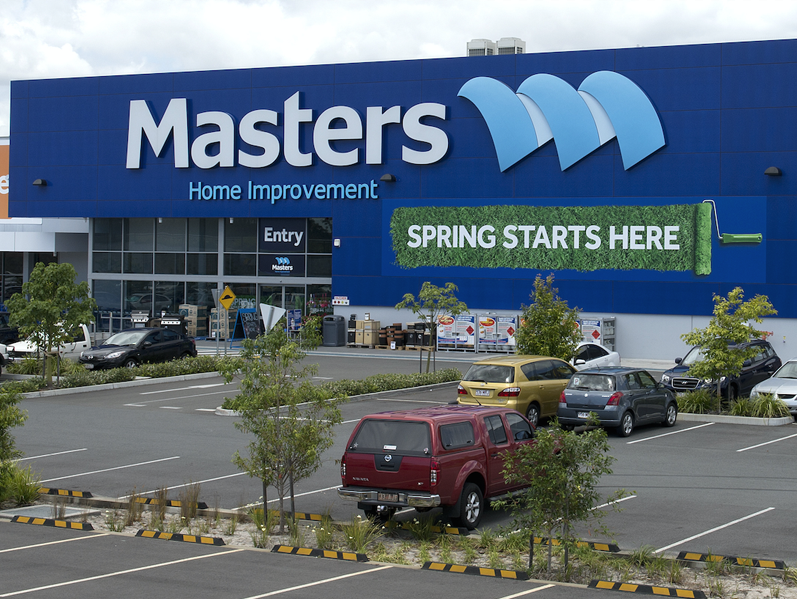 Woolworths has surrendered its attempt to enter the home improvement and hardware business by on Monday announcing it will offload its failing Masters chain.

In a statement to the stock exchange, the retailer said it would commence an “orderly process” to exit the Masters Home Improvement and Home Timber & Hardware business, by either selling it or shutting it down if no buyer can be found.

Woolworths had attempted to challenge the dominance of the Wesfarmers-owned Bunnings chain by partnering with US hardware giant Lowe’s, however its Masters stores were losing a large amount of money.

The decision unravels a strategy to enter home improvement which was driven by chief executive Grant O’Brien who announced his retirement late last year.

The exit process will involve Woolworths buying back a 33.3 per cent interest in the venture held by WDR Delaware Corporation, which is a subsidiary of Lowe’s Companies.

Mr Cairns said his top priority as chairman has been to determine the future of the home improvement joint venture.

“Our recent review of operating performance indicates it will take many years for Masters to become profitable. We have determined we cannot continue to sustain ongoing losses from this business,” Mr Cairns said in a statement.

“We intend to pursue an orderly prospective sale or wind-up of the business. This enables full ownership of the business by Woolworths in a shorter timeframe and gives us access to the widest range of exit options.”

Mr Cairns said the decision to exit the home improvement business will allow the retailer to focus on strengthening the rest of the business.

However, he signalled the process of unravelling the Lowes relationship though the use of “put” and “call” options would be complicated and time consuming.

“Whilst we will move as quickly as possible, the put and call options process will take at least two months to complete and following this a potential sale process or other exit process will take additional time,” Mr Cairns cautioned.

“The business will continue to trade through this period. Our top priority is to do the right thing by all stakeholders.”

Shareholders appear to approve of the move, with Woolworths defying a steep share market slide to post a 4.2 per cent gain to $23.62 by 2:31pm (AEDT).

The company’s shares had been up more than 7 per cent earlier in the day after the announcement was made. Peter Esho, chief market analyst at Invast, said Woolworths’ strength lies in its food and liquor retailing and the exit from hardware was overdue.

“It’s a move that really is out of desperation,” he told ABC News.

“Gordon Cairns, the new chairman at Woolworths is a very astute investor, has a very strong track record in managing companies, and there’s no doubt he would have looked at this and seen it as an opportunity to cut losses.”

However, while investors have cheered the exit from hardware, around 10,000 Masters workers now face an uncertain future.

Retail union the SDA said it had sought and received assurances from Woolworths that every effort would be made to redeploy any staff left redundant if the Masters business cannot be sold in its entirety.

“The company has assured us that its preferred outcome is to sell the business as a going concern and if this is achieved the SDA will promptly engage the new owners on behalf of our members,” said the union’s national secretary Gerard Dwyer.

“If a sale cannot be secured, we’ll be ensuring that every possible avenue for redeployment of Masters’ dedicated, hard-working employees is explored.

“Woolworths is a very large company with a good track record on redeploying staff where brands have been closed or down-sized.”

At the same time, rival Wesfarmers is expanding its hardware business by confirming the purchase of UK retailer Homebase for 340 million pounds, or around $705 million.

Wesfarmers confirmed last week that it had made an offer for Homebase, the UK’s second-largest hardware chain.

Homebase has 265 stores in the UK and Ireland, and Wesfarmers is planning to build the Bunnings brand in the UK over the next three to five years.

“The Bunnings team has done a lot of work to make sure it understands the market and the opportunity, including having visited hundreds of stores, spending significant time researching the market and closely studying international retail expansions into the UK and other markets.”

Wesfarmers shares were up 3.7 per cent to $40.77 by 11:06am (AEDT), but the gains were more related to Woolworths’ decision to exit its Masters hardware venture which is a direct rival to Bunnings in Australia.