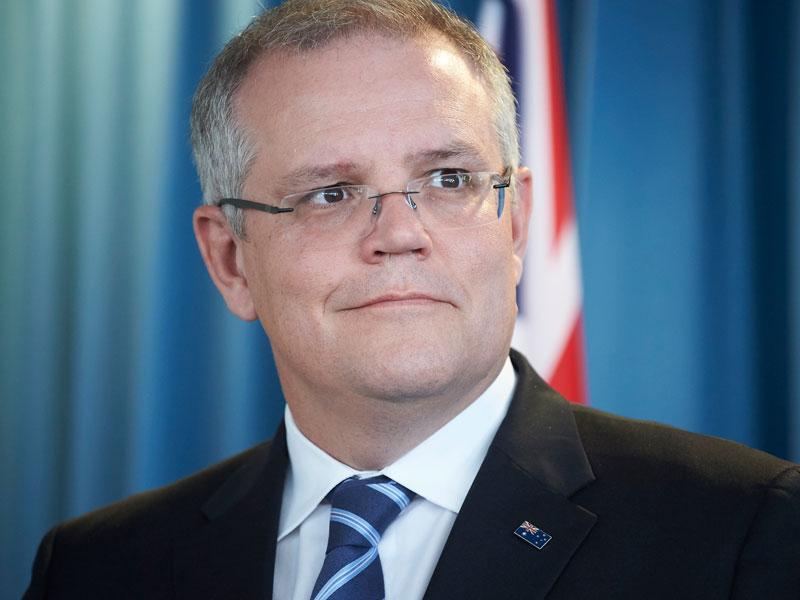 Treasurer Scott Morrison could have arrived at the mid-year budget update humming a modified version of the Coles supermarket jingle: “Down down, forecasts are down…”

That’s because despite his best efforts to tell a story of “emerging momentum” in the economy, just about everything in the mid-year economic and fiscal outlook points in one direction. And, yes, that’s down.

The figures that will make the most headlines are the budget deficits, which have increased $2.3 billion this financial year, but much more in the following three years – $26.1 billion in total over the forward estimates.

So let’s deal with those first. They are not in themselves significant to Australia’s economic performance, and the fact they were blown up to monstrous proportions by the Abbott-era ‘debt-and-deficit’ campaigns should be quietly forgotten. As economist Professor Bill Mitchell from Newcastle University reminded me this week, deficits are supposed to blow out when the business cycle is turning down, and it sure is turning down right now.

The MYEFO document notes that the revenue write-downs are mainly due to “revisions to forecast nominal GDP, with declining commodity prices resulting in lower company tax receipts and a weaker outlook for wages and population growth, leading to lower expected income tax from individuals”.

“Furthermore, weaker equity markets since the 2015-16 Budget have also resulted in downward revisions to receipts from capital gains tax,” it reads.

If a government shows modest fiscal restraint in such conditions – and the government has, by shaving around $7 billion from spending over the forward estimates period – then it will still have larger budget deficits.

It could even lose its AAA credit rating, and the sky would not fall – as Professor Mitchell points out, when the US and Japan went through credit downgrades, their cost of borrowing hardly altered.

The credit-rating holy cow is a favourite excuse for blinkered neo-liberals when arguing that government spending should be slashed to the bone.

Trying to dramatically cut spending during a downturn, which the Abbott and Joe Hockey team tried in 2014, is highly damaging – that pair scared consumers into hiding, which in turn hit growth and the revenue side of the budget.

The Malcolm Turnbull and Morrison team, then, should be applauded for the relatively minor nature of the cuts in their first budget statement.

The cuts presented are aimed at greater ‘integrity’ within existing programs rather than cuts to programs themselves – measures such as stamping out welfare fraud and removing ‘incentive’ payments to medical practitioners who already do what the incentive is supposed to get them to do.

So what about the other ‘down downs’?

You may like to have a look for yourself in the table on p9 of the MYEFO document.

Gross domestic product (GDP) is revised down for the next two years, by 25 and 50 basis points respectively. They are pretty rough forecasts, but my guess is they could fall further depending on the fallout of the US Federal Reserve rates decision due late Wednesday.

Dwelling construction, which has taken up some of the slack at the end of the mining investment boom, is cut dramatically for next financial year – from 4.5 per cent growth to 2 per cent growth.

That’s pretty scary, as it reflects an apartment oversupply issue that seems to have crept up on policy makers, as well as the growing realisation that mortgage borrowers will just not be able to fund so much activity due to stagnating real wages, nor investors due to APRA’s tightening of lending standards.

Business investment is also tumbling down faster in this document than it was at Mr Hockey’s last budget. In May, he thought non-mining business investment growth would shoot up to 4 per cent on the back of his small-business stimulus package, but the Treasury boffins now think it will actually shrink this year by 0.5 per cent, before bouncing back in 2016-17.

And that’s the major problem with the MYEFO set of numbers. They aim to give Australians the ‘hard truth’ about the economy, but stop short of delivering the full story. That bounce-back may just not happen.

Things will head down-down this financial year, but the overwhelming risk is that the 2016-17 forecasts will soon be seen as wildly optimistic.

The case in point is the question Mr Morrison fielded at his media conference about iron ore prices. How can Treasury predict an average ore price of $39 in the year ahead, he was asked, when already today the iron ore spot price has fallen below that figure?

Much as it might stick in Mr Morrison’s craw to say it, the truth is that the ‘jobs and growth’ he wants to put at the heart of budget repair may not happen at all without some more ambitious public spending to stimulate flagging private-sector demand.

Labor embarked on such programs with its ears pinned back to get the country through the credit crunch phase of the GFC, and despite bitter carping from the opposition benches, those stimulus plans largely had the desired effect.

Well Mr Morrison and Mr Turnbull may soon be under pressure to find productivity-enhancing infrastructure plans to fund, or at least underwrite. That would create public-sector demand where private sector demand, and therefore business investment and job creation, are failing.

Such a move would be a huge leap for Mr Turnbull and Mr Morrison.

The good news is that their first budget document shows they have leapt well away from the economically damaging dogma of the Abbott-Hockey reign. After that, anything’s possible.

Scott Morrison: ‘Down down, the economy’s down!’