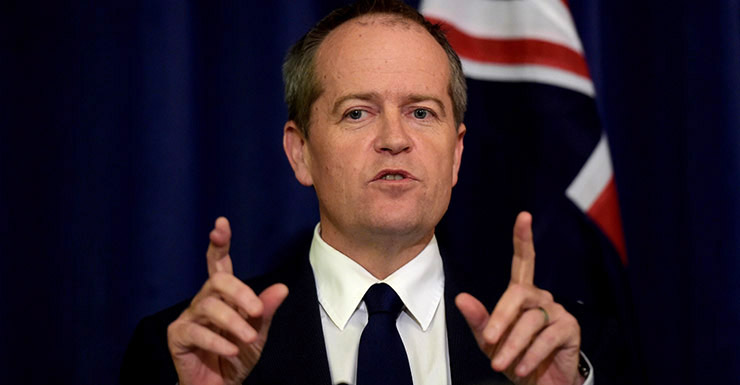 Opposition Leader Bill Shorten has made a big mistake. There is no doubt that he’s made it with the backing of party strategists and Shadow Treasurer Chris Bowen, but it’s a big mistake nonetheless.

Mr Shorten has decided to fight the next election on the issue of raising or broadening the GST because, as he told the ABC on Thursday, “the people who [would] pay this are the people who are going to work every day and battling to make ends meet”.

Okay, so that differentiates Labor from the Coalition, but it puts them uncomfortably close to the Greens, whose Treasury spokesman Adam Bandt said: “Raising the GST will see the poor and low-income earners pay even more tax and cutting personal income tax cuts will see the most well-off Australians pay less.”

• How baby boomers are squeezing young families
• Should you stick with the big banks or move to a smaller lender?
• PM to consult on tax reform

So what’s the mistake?

Well both parties on the left or centre-left of politics have decided to argue against a GST hike without reference to the numbers, and without any detail from the Turnbull government about what measures would be used to compensate the “poor and low-income earners”.

That’s like arguing against putting rum in a fruitcake, with no idea whether a teaspoon or half a bottle will be chucked in.

Mr Turnbull and his advisers now face a situation similar to that which confronted Julia Gillard with carbon pricing in 2011. It’s what economist Ross Garnaut calls a “diabolically difficult” reform, but one that is made a lot easier by throwing buckets of money around.

Ms Gillard’s carbon pricing came with offsetting tax cuts and increases to pensions and benefits, carefully worked out to ensure that 80 per cent of Australians were better off.

Think about that for a minute – that meant the wealthiest 20 per cent were worse off. It was a bit of social engineering cloaked in global environmental concern.

Is there scope within the federal budget for Mr Turnbull to do the same thing? You betcha. And because Labor and the Greens have already dug their trenches for this battle, Mr Turnbull’s economists can model the tax changes just as Ms Gillard did, to ensure the vast majority of people win.

Moreover, when the modelling has been done for a GST increase – which is very likely to be released first as a tax green paper, then as a white paper for the next election – it will shine a light on a very inconvenient truth for Mr Shorten and Mr Bandt.

That truth is that low-income workers currently pay more income tax than would otherwise be necessary so that their wealthier neighbours can receive thousands, or even tens of thousands, of tax refunds – through negative gearing of their loss-making investment properties, discounts on capital gains tax, and huge tax breaks on super contributions that can be made just a year or two before retirement, and spent a short time later.

I’ve previously likened these tax refunds to an old fashioned monkey-trap – so many Australians will want to hang on to these juicy refunds, that we’re politically trapped by them.

And while we’re trapped, the imbalances in the tax system get worse and worse.

Income tax needs to return to something more like the proportion of taxes it produced in the 1950s, and certainly should not be allowed to balloon to what it is currently projected to be in 2024 (see the blue sections on the charts to the right).

And indirect taxes, as Treasury secretaries Ken Henry, Martin Parkinson and John Fraser have reminded us ad nauseum, are a more efficient, and less economically distorting way to collect revenue.

What will strengthen Mr Turnbull’s hand if he goes down the GST path, is that with appropriate compensation it will make Mr Shorten’s “people going to work every day and battling to make ends meet” better off.

Compensation can be achieved via pension increases, increases in welfare payments, personal income tax cuts, and cuts to inefficient taxes such as stamp duty.

If that’s done carefully, and if the slice of revenue from income taxes has decreased and the slice from indirect taxes has increased, the newspapers will be filled with case studies and examples of how much better off those people “struggling to make ends meet” will be.

The alternative, which both Labor and the Greens are making fairly timid suggestions about, is to dismantle that enormous and pointless monkey-trap of tax refunds. Good luck with that.

It’s because that can’t be done – or certainly not to the extent required to fix rolling budget deficits in the order of $40 billion a year – that Mr Turnbull stands a good chance of winning the GST debate.

Done right, the logic in Mr Bandt’s statement above can be inverted – raising the GST could see the poor and low-income earners pay less tax (or receive larger pensions or benefits) and by making income taxes a less significant part of revenue, ensure that the most well-off Australians pay more.

That’s Mr Shorten’s mistake. Before the next election, he’ll likely wish he’d picked a different battle into which to send his best troops.