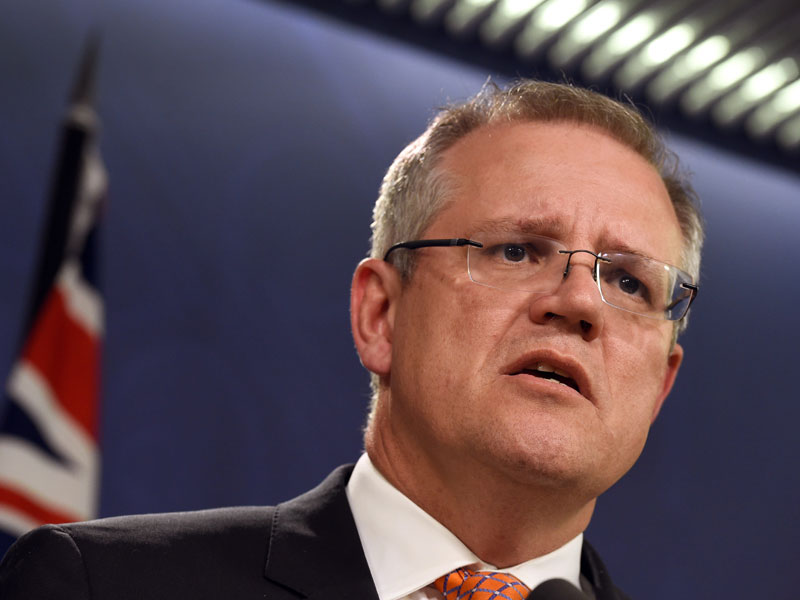 All week, Treasurer Scott Morrison has been leaping to his feet in Question Time to tell Labor that “you can’t tax your way to surplus”, and that the choice at the next election is between steady or falling taxes with the Coalition or rising taxes with Labor.

On Wednesday, the “work, save and invest” Treasurer explained that his plan was to cut spending from 25.9 per cent of GDP this year, to 25.5 per cent next financial year and 25.3 per cent next year.

Low taxes and a slow reduction in spending will, so he says, eventually bring the federal budget back into balance and with luck allow the government to pay down the current debt – net federal debt is expected to peak next year at 18 per cent of GDP.

There is one big flaw this plan, however.

• Big banks set to follow Westpac’s mortgage hikes
• How we are flushing money down the Murray River
• Scott Morrison’s challenge is simple: use the facts

Mr Morrison is ignoring the demand-side of the economy, because it does not fit the rigid, old-fashioned supply-side thinking of some of his fellow MPs in the party room, or indeed with Coalition voters.

Ideology tends to ‘make the perfect the enemy of the good’, and right now the economy needs something good – namely stronger growth and job creation.

What Mr Morrison’s mantra overlooks is that Australian workers actually “work, spend, save and invest”, and it’s the ‘spend’ part of the formula that is in the most trouble.

Economies don’t listen to three-word slogans. They have a nasty habit of ebbing and flowing based on fundamentals, not rhetoric.

And fundamentally, the next election is not about tax as Mr Morrison argues so doggedly. Nor is it even about a budget surplus. It’s about jobs.

If Mr Morrison had not yet grasped the precariousness of this economic moment, Westpac’s out-of-cycle mortgage rate increase on Tuesday should have been the wake-up call he needed.

The other big banks are expected to follow, and the more they raise, the more impotent the RBA becomes – its recent rate cuts have not stimulated investment and job creation as hoped, and the central bank only has 200 basis points left to cut anyway.

The 20 basis point increase in Westpac’s variable rate this week will not only dampen consumer confidence and demand for new mortgages, and further sideline the RBA, but will suck a bit more private demand out of the economy through a direct hit on family budgets.

For a Westpac borrowing that’s $684 of demand taken out of the economy a year – it does not flow through as greater profits for Westpac, because the hike is only covering the bank’s increased funding costs.

To put that in perspective, the Coalition made much of the Gillard-era carbon tax, worth $550 per year per household, as being a “handbrake on the economy”.

Well it wasn’t, and an average $684 hit to Westpac-mortage households won’t, by itself, cripple the economy either.

But it is just another worrying trend for a Treasurer stuck talking about tax instead of jobs.

There has been a heartening jump in consumer confidence in the past week, widely attributed to the upbeat tone of the new Turnbull government.

But that won’t be enough to sustain growth in the longer term, because alongside Malcolm Turnbull’s morale-boosting speeches, voters will still be reading about, or experiencing directly, the many headwinds the economy faces.

But with even Macquarie Bank now forecasting a 7.5 per cent fall in prices, the wealth effect of the housing boom will go into reverse and households will be looking to cut back on spending – more demand disappearing.

On top of that, job losses in auto manufacturing and the resources sector continue.

And even the government will be feeling the revenue pinch from weaker company tax receipts, flat-lining income tax, and lower-than-expected GST receipts to hand back to the states.

Against that backdrop, winding back spending as a percentage of GDP is just another kind of vanishing demand.

None of this is to argue that allowing the budget deficits to stay at their current $40-billion-plus levels is desirable, or that a growing federal debt won’t eventually be a problem.

Rather, what Mr Morrison needs to get to grips with – in contrast to former Treasurer Joe Hockey – is that reducing public demand, just as private demand is faltering, sends jobs and growth in the wrong direction.

A growing number of economists expect 2016 to be the first grim year after the great ‘inflection point’ in the housing/banking and resources sectors.

It would be useful, given the near certainty of the arrival of these waves of pain, to dial down the rhetoric around cutting taxes and spending, and talk up job creation in all its forms – some of which simply has to be supported by government spending.

Australians don’t just ‘work, save and invest’. They also spend. Mr Morrison must see that sooner rather than later if he wishes to avoid the mistakes of his predecessor.