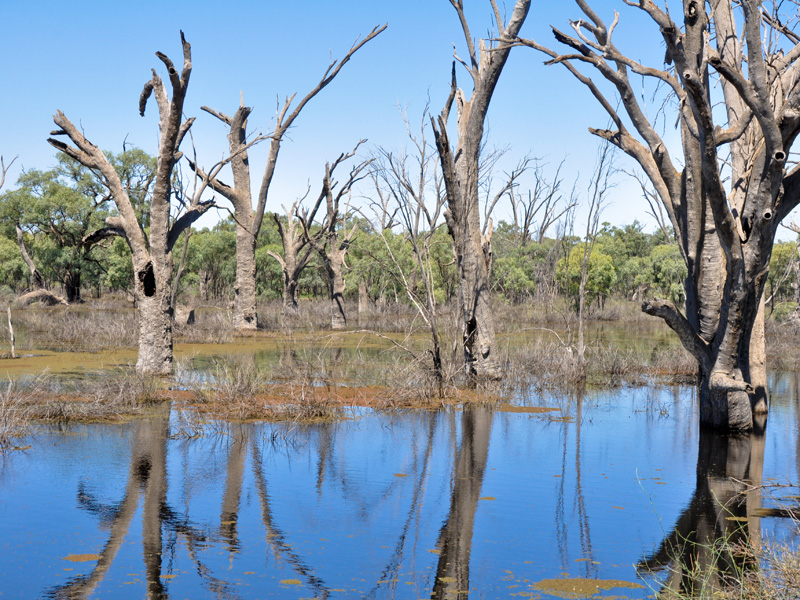 Reserve Bank deputy governor Philip Lowe issued a warning this week that “chronic pessimism” is harming Australian prosperity and that if it is not corrected “many of the opportunities that we do have are likely to go begging”.

Well, yes, there is a lot pessimism, but in many cases it is for structural reasons – auto workers watching their factories close, resource states watching jobs and property prices in decline, and large pockets of youngsters unable to find their first footholds in the jobs market.

But there are few places as gloomy, according to one Canberra MP, as the farming communities of the Murray-Darling Basin.

When I met this week with the Liberal Member for Murray, Sharman Stone, she began by scattering several maps of her electorate, centred on the Victorian town of Shepparton, across the table.

The maps showed the drastic decline in dairy farming in the region in the past decade – the number of properties across the enormous Murray–Darling Basin has halved, and in Dr Stone’s own region of Greater Shepparton, has dropped by 65 per cent.

The irony is that agribusinesses and the value-adding food processing plants are one of the opportunities that may, in Mr Lowe’s words, “go begging”.

Australia desperately needs new export industries to take up post-mining-boom slack, and selling value-added foods to the emerging middle classes of Asia should be a boom industry.

So what’s stopping us? Well in the Murray–Darling Basin it’s water, and the now five-year-old Murray-Darling Basin Plan set up by Labor.

That plan was one of the most emotive policy issues of the Gillard/Rudd years.

As Labor sought to balance environmental, social and economic objectives, angry farmers were seen in town centres burning copies of the draft plan.

Labor backtracked, compromised on the amount of water needed to keep the various river systems, wetlands and lakes healthy, and got the legislation through parliament.

However, getting the participating states to support the plan required a large concession to South Australia, and that concession is now in Dr Stone’s sights.

In 2012, a special account was set up to dispense a whopping $1.7 billion across 10 years to make sure SA met certain targets – for instance, keeping the mouth of the Murray River flowing “95 per cent of the time” and achieving set water levels in the area known as the Lower Lakes.

The problem, for the communities represented by Dr Stone, is that this special account was intended to add 450 gigalitres to the 2750 gigalitres already allowed for in the Murray-Darling Basin Plan.

That’s a lot of water – 450 gigalitres is just a bit less than the entire volume of Sydney Harbour.

Clearly, recovering any part of that allowance would help Victorian and NSW irrigators keep existing properties going, create jobs, and help put a floor under the food processing industries that should be leveraging ‘brand Australia’ to sell high-quality products into Asia.

At a superficial level, public opinion would likely support the South Australians over upstream irrigators. Surely a flowing river in the lower reaches is part of the natural order of things, and giving up enough water in the upper reaches of the system is only fair?

Well, according to Dr Stone, it’s really not that simple for several reasons.

The extra 450 GL paid for by the special account is added to the main channels of the Murray-Darling system, but is not guaranteed to get to the lower lakes and rivers or to flood the right environmental areas along the way.

Dr Stone claims that flood events are unpredictable – for instance, a controlled release designed to flood one area, can be augmented by sudden rain and end up flooding areas not intended.

This, she says, means box gum forest, which likes only minor and intermittent floods, is being killed off, whereas red gums, which need heavier flood events, thrive.

South Australian Greens Senator Robert Simms does not entirely disagree, saying “if extra water is delivered in the wrong way – in the wrong place or time –  then it could cause detrimental impacts”.

However, he contradicts Dr Stone on the ability of the Murray-Darling Basin Authority (M-DBA) to monitor and avoid such problems.

He asserts that: “There is enough oversight as part of the Murray-Darling plan that the water is used in a scientifically based way.”

But it is not only environmental problems that Dr Stone thinks need addressing. The other big question she asks is whether the financial cost of obtaining that extra 450 GL is good value.

University of South Australia’s program director in water resource management, Dr James Ward, tells me that in very approximate terms, the lower Murray River provides around 60 per cent of Adelaide’s water needs – roughly 120 GL out of a total 200 GL.

And yet SA has a $1.4 billion desalination plant sitting idle, that could provide about 100 GL a year for somewhere in the order of $100 million in operating costs.

That’s where the numbers get interesting. The ‘special account’ legislation contains set amounts to be used each year to obtain the extra 450 GL from upstream. Next financial year the amount is $110 million. The year after that it’s $430 million. And in the following three years it’s $320 million, $350 million and $315 million.

What Dr Stone is arguing is that a good chunk of that money could be used to fund more efficient water use downstream, and to fire up the currently unused desal plant.

Every gigalitre returned to the Murray that way would make a big difference to farming communities upstream, and could avoid some instances of harmful flooding.

As a political issue, the Murray-Darling Basin is extremely hard to understand.

What is easier to understand, however, is that many farming communities in the Basin are about to be clobbered by and extra-strong El Niño cycle that will parch their land further.

On that basis alone, Dr Stone’s plan to look at using a bit more water upstream, and funding its replacement downstream, is worth considering.

It might just ease a bit of pessimism, and stop a big opportunity from going begging. How we are flushing money down the Murray River