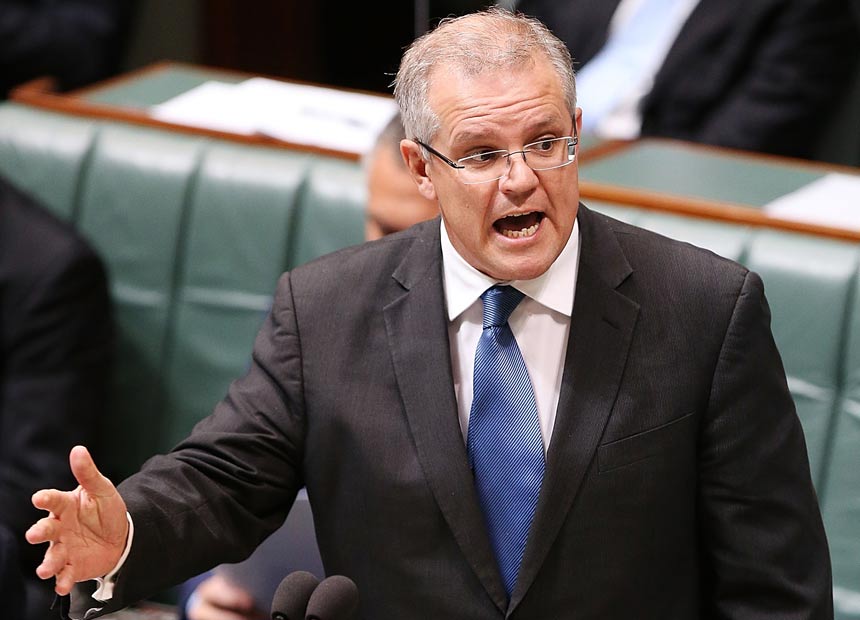 Treasurer Scott Morrison has a historic opportunity to be straight with voters about the state of the nation’s finances – only to date he hasn’t quite made up his mind to do so.

Coming into office after the Turnbull-Abbott party-room ballot, Mr Morrison found it convenient in the first days as Treasurer to simply repeat Joe Hockey’s assertion that we have a spending problem, not a revenue problem.

Well that was always untrue.

As the chart below shows, the former Labor government had a pretty nasty GFC-hangover problem with revenue.

Meanwhile, Mr Morrison is figuring out the politics of an unbalanced budget on the fly. On Wednesday morning he resisted questioning by the ABC’s Michael Brissenden and refused to state definitively whether we had a ‘revenue or spending problem’.

All he did say was: “Well, spending as a percentage of GDP is over 26 per cent Michael, so that’s higher than at the GFC (global financial crisis). Are you suggesting that that’s a sustainable level? I’m certainly not.”

But Mr Brissenden should have stood his ground.

• Can Morrison return the economy to health?
• ‘We’re ahead of curve on tax dodgers’
• Labor taunted on penalty rates
• Obama, Turnbull, Rudd enter a bar: who tweets first?

Of course 26 per cent is sustainable – not only that, it is likely to look like a low-ish figure as the Australian population ages, and proportionally fewer workers have to support a top-heavy demographic structure.

Combined with state and local government taxes, public spending as a proportion of GDP in Australia is just over 30 per cent. OECD data shows that in the US that figure is around 38 per cent, and the UK 45 per cent. And those two countries are currently leading the pack for economic growth in the post-GFC era.

The problem with the tax-spending debate in Australia is it was hijacked during the Abbott years – three in opposition and two in power – via the highly successful ‘debt-and-deficit’ slogan.

Tony Abbott actually told parliament in March that “we were heading to Greek levels of debt and deficit”. Pure nonsense.

Australia was then, and is now, a nation with low levels of debt by international standards, and a not insurmountable fiscal problem.

Mr Morrison has a unique chance to explain this to voters. He and Prime Minister Malcolm Turnbull are riding a wave of popularity in the polls, which in this commentator’s view will only be harmed by telling more of the same debt-and-deficit furphies.

That said, Mr Morrison is right about one thing – the best way to pay down the national debt is to grow the economy. Jobs and growth should always have been the focus, not the size of the national credit card bill.

One surefire way to prevent growth is to knock consumer confidence down again in the way the first Abbott government budget did by vowing to cut services and cap spending at an arbitrary 23.9 per cent of GDP.

Think about it. We’re having a debate about keeping public spending below 24 per cent, while in the UK argument rages about getting it down to around 35 per cent (which would be a mighty acheivement for the Cameron government).

This is all confusing economics with political memes. And Mr Morrison needs to decide where he stands. Voters might be duped by another turbo-charged debt-and-deficit con, but having cheered the booting out of the Abbott leadership team, that’d be a hell of a gamble.

A more mature, productive approach would be to name more sensible limits to spending and revenue – the Howard era 26 per cent high-water mark would not be a bad start.

Australian voters have, time and again, shown they value the services paid for by that slice of GDP.

Moreover, finding tax reforms that can raise federal tax receipts to pay for them does not have to be unpopular.

Mr Turnbull and Mr Morrison have been wise enough to ‘put back on the table’ some obvious tax reforms that had been ruled out by Mr Abbott and Mr Hockey.

Reductions in capital gains tax concessions and super tax concessions are the obvious places to start. GST reform, too, makes economic sense if suitable compensation is offered to middle- and low-income earners.

But screaming and shouting that spending 26 per cent of GDP is unsustainable, or that spending and tax receipts should stay below 24 per cent, is the tired ideology of a deposed government.

We need a tax and spending debate based firmly on the facts. The days of spinning the numbers for political advantage, to the detriment of the economy and national interest, must be put behind us.

That, Mr Morrison, is your challenge. Scott Morrison’s challenge is simple. Use the facts