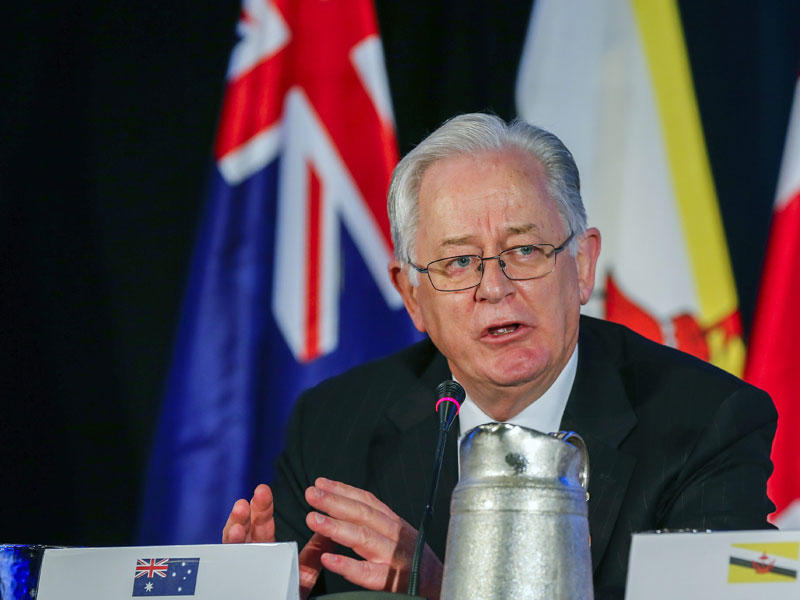 The Turnbull government and business groups are in full voice about the benefits of the Trans-Pacific Partnership, but the rest of us should not burst into song just yet.

For starters, the TPP negotiations have been underway for eight years but we – voters and citizens – have yet to see the final text.

Parts of the draft agreement were leaked, raising strong concerns, but we were told this was just needless scaremongering.

• PM: TPP is a ‘giant foundation stone’
• What exactly is the TPP?
• Pacific trade deal agreed
• Why this trade deal actually means something
• Sceptics emerge on trade deal

Now the deal is done, can our government name the date on which the full text of the TPP will be released?

I say the full text because the Abbott government signed up to the China Free Trade Agreement late last year and did not reveal until six months later that there were side agreements on Chinese visa workers and the recognition of their skills.

Even bastions of free marketeers like the Productivity Commission reckon the benefits of free trade deals are overhyped when they are signed, but underwhelm when the economic impacts can be studied.

In the case of the TPP, the politics driving it is the desire of the US to set the rules governing world trade before China does, in keeping with its strategic and military “pivot” towards Asia.

The Turnbull government argues the TPP will establish a “more seamless” trade and investment environment across 12 countries which represent around 40 per cent of global GDP.

Ahead of the signing, the Nobel prize-winning economist Joseph Stiglitz and his colleague Adam S. Hersch argued the TPP was not what it seemed and warranted sober analysis.

“You will hear much about the importance of the TPP for ‘free trade’,” they wrote.

“The reality is that this is an agreement to manage its members’ trade and investment relations – and to do so on behalf of each country’s most powerful business lobbies. Make no mistake: It is evident from the main outstanding issues, over which negotiators are still haggling, that the TPP is not about ‘free’ trade.”

Now a deal has been done and Australia’s Trade Minister Andrew Robb insists that concerns over the TPP have been answered in four key areas. Namely:

• the TPP will not require any changes to Australia’s patent system and copyright regime, and recognises the importance of new innovative biologic medicines (which are derived from living cells cultured in a laboratory);

• the deal does not change Australia’s existing five years of data protection for biologic medicines or any other part of our health system, including the Pharmaceutical Benefits Scheme. “Concerns that the price of medicines would increase have proven to be absolutely unfounded,” Robb says;

• it provides a modern Investor State Dispute Settlement (ISDS) mechanism which allows companies to sue governments in closed quasi-courts. But Mr Robb insists there are safeguards to protect “legitimate government regulation” in health and the environment. “Australia will be able to ensure that tobacco control measures are never open to challenge,” he says; and

• it has e-commerce provisions which will promote a more “liberal cross border environment for the flow and storage of data, while also ensuring appropriate consumer protections and retaining the right of governments to regulate in the public interest”.

Now, Big Tobacco, Big Pharma, the US-based IT giants and the Hollywood studios are all adept at manipulating complex treaties and laws in their own favour.

But Mr Robb has made clear statements about the impact of the TPP and will be left like a shag on a rock if he has overstated his success.

Meanwhile, the critics – who include environmentalists and trade union leaders – also have to back up their criticism once the TPP is released.

The US Trade Representative Michael Froman recently wrote a lengthy defence of the TPP that it would prohibit some of the most harmful fishing subsidies, as one of several big environmental improvements.

“It will do so for a group that includes seven of the world’s top 18 fishing nations, accounting for about a quarter of global marine catch and seafood exports,” Mr Froman wrote.

“TPP partners will also be required to promote the long-term conservation of sharks, whales, and sea turtles, and to implement measures to combat illegal fishing, including inspections and seizures at ports and monitoring, surveillance, and enforcement systems to curb trade in pirated fish.

“An opportunity of similar scale exists to tackle illegal logging and wildlife trafficking.”

Mr Froman also argued that, under the TPP, countries will be obligated to reform so that their laws and practices are consistent with the International Labor Organization’s fundamental labor rights.

“TPP is the first trade agreement that will include requirements for countries to adopt laws on minimum wages, work hours, and occupational safety and health; to act against trade in goods produced by forced labor, including such goods made outside TPP countries; and to accept special protections against degradation of workers’ rights and working conditions in ‘export processing zones’, where labor problems are often at their worst.”

For example, Mr Froman argued the TPP would require Vietnam to allow workers to form and join independent labour unions, Brunei to pass a minimum wage law and for Malaysia to address a forced labour and human trafficking.

Will these low-wage countries accept and enforce these measures? Will Japan moderate its stance on whaling?

That remains to be seen. Workers should approach the TPP with caution