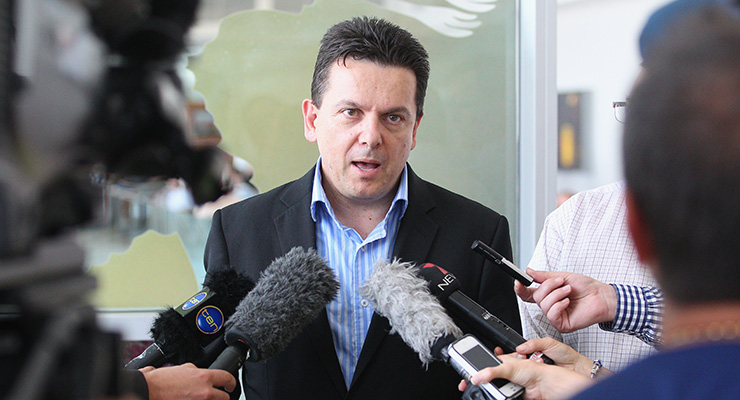 On the morning of Malcolm Turnbull’s toppling of Tony Abbott, South Australian senator Nick Xenophon was mid-interview with The New Daily in his Parliament House office, when a staffer interrupted him with breaking news.

Coalition polling had just been leaked that put Xenophon’s party, the Nick Xenophon Team (NXT), in its strongest position yet to take four key lower house seats in South Australia.

It was a straw to break the back of Abbott’s leadership.

South Australian journalist Angelique Donnellan wrote the next day that “about half a dozen” Coalition MPs were likely pushed to support Tunrbull by Xenophon’s growing strength.

A key factor in the senator’s popularity was the his vocal campaigning on ways to fix that state’s growing jobs crisis.

The looming shut-down of automotive manufacturing and uncertainty around future submarine building contracts, has helped put the unemployment rate at 8.1 per cent, greater than the national rate of 6.2 per cent.

When under-employed South Australians are added, the rate is 18.2 per cent, compared with a national rate of 15.1 per cent.

That’s a lot of people looking for more work – people who may be more resistant than other Australians to Malcolm Turnbull’s undoubtedly strong rhetorical skills.

That’s where Xenophon will continue to focus his attack on the government.

Most obvious on his shopping list is the Abbott government’s pre-election commitment to build the next generation of naval submarines in Adelaide – he’s lobbying for at least 70 per cent of the contracts to be fulfilled on-shore.

Next (or is that NXT?), he wants funds earmarked for car makers under the Automotive Tranformation Scheme to be available to after-market car parts makers, and engineering and design service firm as well.

The idea is to kick-start those promising sectors now that the low Aussie dollar makes exports much more appealing to trade partners.

And the senator has big plans to revise government procurement rules, to take account of social and economic benefits of buying Australia that he says are currently ignored.

Along with Victorian independent John Madigan, Xenophon wants legislated changes to procurement laws to ensure that “broader economic benefits from using local product such as employment, tax, ‘whole-of-life’ project costs such as maintenance, and multiplier effects from keeping those jobs in Australia”.

These are big problems for Turnbull, because although the PM might be pragmatic enough to consider such proposals, he will have one eye on the angry rump of conservatives he has just deposed – for whom all of these market interventions are anathema.

On the procurement issue, the dominant strain of economic thinking in Canberra is pretty black-and-white – tenders should go to the best priced supplier that meets the tender specifications.

But Xenophon and Madigan disagree.

In a submission to a senate committee report on procurement policy, the senators noted: “The Royal United Services Institute of the UK found in a 2012 report found that over a third of defence procurement funds spent locally found its way back to the government in taxes.

“There should be an independent analysis of the extent to which government procurement funds spent locally are returned to the Commonwealth and states.”

This is powerful stuff politically, because Xenophon is calling out Canberra policy advisers for being blinkered on the real ‘cost’ to the federal budget of a procured item.

The fairly straightforward arithmetic method Xenophon and Madigan argue should be used – cost of goods, minus the taxes returned to the government – is something the Coalition will have difficulty arguing away.

They cite a recent case in which Rossi Boots, based in Adelaide, missed out on a contract to sell 100,000 pairs of boots to the armed forces because they were more expensive than an Indonesian supplier.

But when a ‘whole-of-life’ calculation is done on a pair of boots, they may well be cheaper.

And that’s before other social benefits are included in the calculation – no welfare payments for retrenched workers, the multiplier effect on other businesses when Rossi’s workers spend their pay packets and so on.

That’s the logic Xenophon will continue to put to the electorate.

And despite the Turnbull-effect lifting Coalition prospects in South Australia, it’s an argument that will be gobbled up by voters hungry for change – nearly a fifth of South Australia’s workforce.

Xenophon may have helped boost the Turnbull camp as it sought to depose Tony Abbott, but he will be just as much a thorn in the side of the new prime minister. South Australia’s growing jobless numbers alone will see to that.