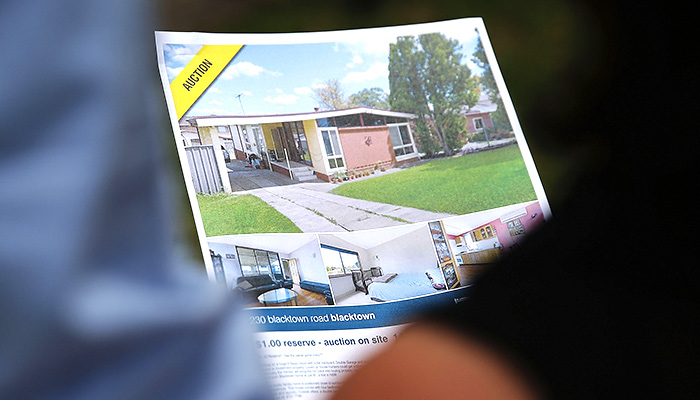 Australia’s top banking regulator has signalled that it might impose more restrictions on home lenders to combat “heightened risk” in the residential property market.

Wayne Byers, the chairman of the Australian Prudential Regulation Authority (APRA), believes lenders are increasingly approving loans to borrowers who will potentially be unable to meet repayments.

Speaking at a business lunch in Sydney on Wednesday, Mr Byers highlighted APRA research showing that the percentage of housing loans approved outside of lenders’ normal serviceability policies had more than doubled since 2009.

• The stock market correction we had to have
• Stop ‘hyperventilating’ Australia, this isn’t another GFC
• Who’s afraid of a housing crash? Not these people

According to the regulator, almost four per cent of all home loans approved in Australia this year involved lenders compromising on assessments of borrowers’ ability to repay.

Lenders were pushing through loans by assuming borrowers had “meagre living expenses” or by relying “on interest rates not rising very much”.

Earlier this year, APRA imposed caps on the ability of banks to increase lending to investment borrowers and flagged plans to increase the amount of reserve cash the major banks must put aside for every dollar they lend to home borrowers.

“Given many changes to lenders’ policies, practices and pricing are still relatively recent, it is too early to say whether further action might be needed to preserve the resilience of the banking system,” Mr Byers said.

“We remain open to taking additional steps if needed, but from my perspective the best outcome will be if lenders themselves maintain a healthy dose of common sense in their lending practices, and reduce the need for APRA to do more.”

If rates were to rise …

Mr Byers said the combination of high levels of household debt, rising property prices and subdued income growth, meant that lenders were operating in an environment of “heightened risks”.

He noted that these risks were currently manageable because borrowers were exposed to historically low interest rates.

But he warned that more borrowers would find it difficult to service their debts if interest rates reverted to historic averages.

At present interest repayments account for less than nine per cent of household income, but this would blow out to 12 per cent if mortgage rates reverted to the long-term average of around seven per cent.

“Interest payments account for a lower share of household income than at any time since the financial crisis,” he said.

“Over a longer period, however, they do not necessarily look especially low.

Borrowers not fixing at low rates “If housing interest rates returned to anything like long-term averages, the interest burden would begin to look quite high.”

Contrary to recent commentaries of mortgage brokers and research houses, the percentage of borrowers taking up fixed-rate loans has been declining this year even though rates have touched 50-year lows.

According to APRA research, only around 10 per cent of borrowers have fixed-rate loans compared to 20 per cent in 2013.

“Australians have, thus far, not been taking advantage of record low interest rates to fix the rates on their borrowings,” Mr Byers said.

“Obviously, the sensitivity of borrowers to any increase in interest rates in the future will be a function of the extent to which they have maintained variable rate loans.

“At least thus far, there is little evidence that this sensitivity is being reduced.”

The regulator’s finding on the take-up rate of fixed loans is surprising in light of the fact that some non-bank lenders are marketing five-year fixed loans as low as 4.24 per cent.

That’s cheaper than the rates offered by most lenders on standard variable mortgages.

Three-year fixed-rate loans can be gained even cheaper, with the Greater Building Society allowing borrowers to lock-in at 3.89 per cent. A recent investigation by the Australian Securities and Investments Commission found that interest-only loans could add more $100,000 to the cost of loan repayments for borrowers paying over 25 years.

Despite the higher repayment costs, around 45 per cent of all home loans approved in the last year included interest-only terms.

Mr Byers noted that owner-occupiers with such loans were potentially less well-positioned to withstand the burden of higher rates in the future.

“Interest-only lending has grown in its share of new lending,” he said.

“There are many reasons offered for why this might be, but the increasing prevalence of interest-only lending does reduce the committed build-up of borrowers’ equity buffers that principal-and-interest loans naturally provide.” Mr Byers warned banks that there was little to be gained from ignoring credit standards in the present environment.

“APRA is certainly intensifying its scrutiny of portfolio risk profiles but, regardless, lenders should recognise the heightened risks and be doing likewise without too much prompting from us.”

The Australian economy’s exposure to risks in the housing market is highlighted in the accompanying table (right).

Housing loans account for more than 60 per cent of total loans in Australia – the highest level of any economy in the developed world. Big banks could be stung by risky lending: regulator