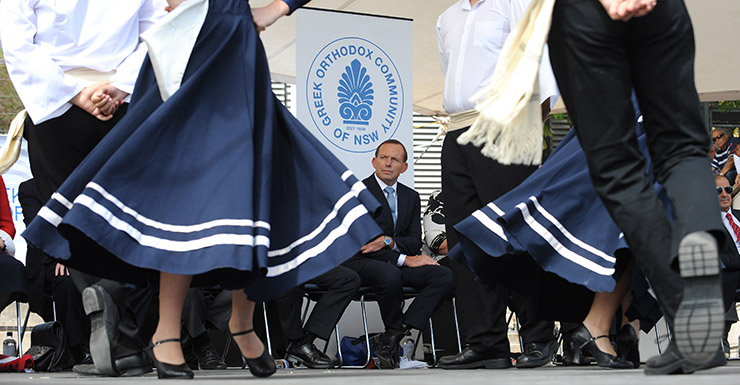 Are there lessons to be drawn from the Greek debt fiasco for Australia? Absolutely, yes, but not the lesson we’ve already heard about.

In the lead-up to the 2013 federal election, the Coalition used the public debt-and-deficit issue to help boot Labor out of power, but then kept referring to “Greek levels” of debt for far too long after that election.

Prime Minister Tony Abbott told parliament on March 18 this year, for instance: “I am very happy to talk about this government’s progress at budget repair, because didn’t our country need budget repair after six years of debt and deficit disaster put in place by members opposite?”

Well that wasn’t true in March. Nor is it true now, even after the Abbott government had ditched the debt-and-deficit story.

In the May budget, a return to structural surpluses was all but put off for another day, and the Grattan Institute predicts federal net debt will peak at 18 per cent of GDP in 2017.

But saying ‘Greek levels’ of debt were never more than a political invention is not the same as saying that governments should give up on a return to surplus.

There are a long list of important savings and revenue-raising measures that both major parties should have the guts to tackle, particularly by reducing a range of ‘tax expenditures’ (see: Hockey is protecting a fiscal monkey trap). What makes the ‘Greek levels’ meme so dangerous is that it helps draw our attention away from the genuine debt problem facing Australia – record levels of household debt.

Most of that debt is in the form of mortgages. Australian households now hold 90 per cent of GDP in mortgages, or more than 150 per cent of disposable income (see chart).

The main reason Australian private debt is not talked about as being at ‘Greek levels’ is that the 190 per cent of GDP owed by Greece to its many creditors is public debt.

Surely private debt is fine, because if people can’t repay it they just lose their homes don’t they?

Well no, that’s not how national economies work. The history of the global financial crisis, which was followed soon after by the sovereign debt crisis, is that when banks are about to collapse governments step in to bail them out.

Other articles by Rob Burgess:

• We need to hear the truth about Casino Australia
• When rental rivers run dry, investors will be left stranded
• Why banking on cheap rates is a risky strategy

In both Spain and Ireland – two of what in 2009 we called the PIGS, or Portugal, Ireland, Greece and Spain – massive public debts were racked up bailing out banks who had over-lent and stoked property bubbles.

There is no reason, at present, to think Australian banks are in trouble.

They would only need a bail-out if several factors challenging Australia got much worse – Chinese demand for our resources tumbling due to that nation’s internal troubles; the dollar plummeting as investors chased better investments abroad; high unemployment and flat or declining real wages; and rising costs of debt on global markets.

We have seen all of those to a small degree in the past couple of years, but our banks are still in good health.

However, as banking analyst Martin North warned the ABC this week, a small increase in borrowing costs could push a very sizeable slice of mortgage borrowers into perilous territory – and when mortgage holders are in trouble, the banks are in trouble.

Mr North argues that “a 1 per cent lift from where [interest rates] currently are would move the total pool of those in mortgage stress from around 35 per cent to around 50 per cent”.

The real lesson Australia should be heeding from the Greek crisis is how quickly a private debt crisis becomes a public debt crisis – the transition from the GFC credit crunch to a multi-nation sovereign debt crisis occurred because governments could not countenance letting their banking systems fall over.

They stepped in, bought dodgy assets, and bulked up on public debt to bail out the private lenders.

So while we can look at the Greek public debt and say “lucky we don’t have one of those”, the relationship between private and public debt can change very quickly.

That’s what the Greek tragedy should be reminding us. Forget the Canberra spin around public debt. Our real fear should be the stock of private debt that could turn toxic if international events don’t go our way.

And if that ever happens, Australian taxpayers will start to understand what ‘Greek levels’ of debt really feel like.

‘Greek levels’ of debt? No. Here’s our real debt crisis