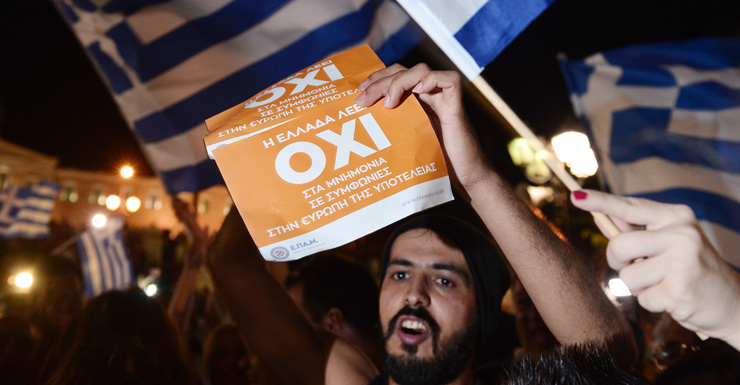 A majority of Greeks have heeded the pleas of the Tsipras government, voting down new austerity measures from European creditors.

Just over 61 per cent voted ‘No’, according to the official count.

Prime Minister Tsipras appeared on television to thank his people for their “very brave choice”, pledging to renew negotiations with creditors for a more favourable deal.

“Today we are celebrating the victory of democracy, tomorrow the hard work begins,” he said.

Hundreds of celebrators flocked to the central square of Athens at the news, chanting slogans, waving Greek flags and holding aloft placards.

Prime Minister Tsipras will try to use this victory to strengthen his negotiating position in the European talks, but the outcome is likely to be overtaken by other events.

Greece is facing another deadline to repay part of its debt and this one is a biggie.

On July 20, the Greek government needs to repurchase government bonds worth €3.4 billion now held by the European Central Bank.

If the payment cannot be made, Greece would be in sovereign default and the ECB would be required – under European banking rules – to cut liquidity support for the country’s commercial banks.

This would render institutions such as the National Bank of Greece and Alpha Bank insolvent.

This is a far more critical deadline than the one on June 30 when Greece failed to make good on a €1.4 billion loan to the International Monetary Fund.

Greek Finance Minister Yiannis Varoufakis had been seeking to reschedule the July 20 payment before the negotiations with the IMF and European finance ministers collapsed last month.

On Saturday, German finance minister Wolfgang Schauble appeared to toss an olive branch to the Greek people (not the government), telling the Bild newspaper that the referendum was a choice between staying with the Euro currency or being without it “temporarily”.

Mr Schauble’s comments were interpreted by The Guardian as a back-down from the uncompromising rhetoric that led to Greek negotiators abandoning the bailout talks.

“It is clear we will not leave the people in the lurch,” Mr Schauble told Bild.

Mr Schauble’s change of tone came after US newspapers questioned his handling of the debt negotiations last week.

The European Union and the European Central Bank have also been accused of trying to provoke regime change in Greece by forcing capital controls on Greek banks last week.

Shortage of ballot envelopes in Athens

The sudden calling of the referendum by Mr Tsipras appears to have caused a logistical headache for officials overseeing the vote.

Electoral officials in Athens declared on Saturday night that there were insufficient envelopes to accommodate the number of voters on the roll.

Under Greek voting laws a ballot paper is declared invalid if it is not closed in an officially marked envelope before it is placed in a ballot box.

The Athens Bar Association issued a public alert on the shortage of envelopes on Saturday.

Unlike elections in Australia, which are overseen by officials of the Australian Electoral Commission, Greek national ballots are administered by judges and lawyers affiliated with local bar associations.

Greek referendum: we the people say no