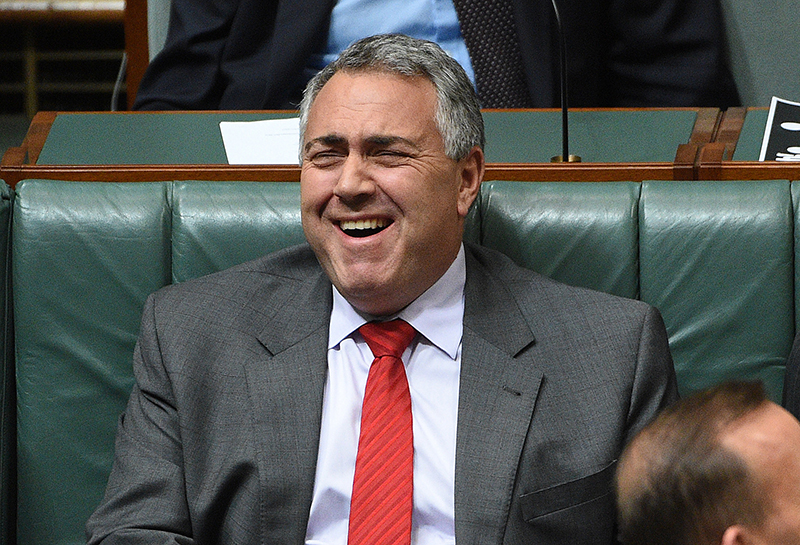 Joe Hockey has got it all wrong.

Rather than obsessing over getting back to surplus as soon as is humanly possible, he should be borrowing more money, raising the GST, and cutting tax concessions to the rich.

That, at least, is the view of the International Monetary Fund, the body that acts simultaneously as the world’s insurance policy and its economic policeman.

• Hockey’s bogeyman: government debt explained
• Is this the end of ‘bigger fool’ economics?
• Here’s why cheap loans are under threat

Following an official visit to Australia, the IMF said on Wednesday: “Australians have enjoyed exceptionally strong income growth for the last couple of decades. But the waning of the resource investment boom and the recent sharp fall in the terms of trade have brought this to a halt.”

What it then said will rankle with Treasurer Joe Hockey, PM Tony Abbott and everyone in the ‘budget deficits are the root of all evil’ camp. However, it takes a bit of decoding.

What the IMF said: “A small surplus should remain a medium-term anchor of fiscal policy and budget discipline should be maintained. But the planned pace of consolidation nationally (Commonwealth and States combined) towards this medium-term objective is somewhat more frontloaded than desirable given the weakness of the economy, the size and uncertainty around the resource boom transition, and the possible limits to monetary policy.”

What it meant: “Budget surpluses are all well and good, but by obsessing over getting back to surplus as soon as possible, you’re at risk of weakening the economy.”

The IMF is a conservative institution, and very, very far from being a proponent of the “spend your way out of trouble” school – as the harsh austerity conditions it has demanded from Greece in exchange for bailout loans have shown.

So the fact that it has called for the Australian government to borrow and spend more, not less, is highly significant.

Here’s some more of what it said on debt: “IMF research suggests that economies like Australia – with an output gap, accommodative monetary policy, and fiscal space – benefit most from debt-financed infrastructure investment, with the growth boost largely containing the impact on the (low) debt-to-GDP ratio.”

In short, the IMF believes the economy would benefit from the government taking advantage of its AAA credit rating and low borrowing rates to issue bonds and use the money to build infrastructure.

Mr Hockey’s attitude to debt has been along the lines of, “I couldn’t get my austere budget through parliament, so we’re stuck with these spending commitments”. He doesn’t view debt the way a private company or individual does, which is that, done right, it will lead to increased wealth in the long term. The IMF, however, clearly does view it like this.

But it’s not just on debt that Mr Hockey is at odds with the IMF. Tax policy is also a major point of difference.

The IMF said that bracket creep should be checked, corporation tax lowered, and stamp duty scrapped. And how should it pay for this? By broadening the base of the GST and “possibly raising the rate”, as well as “broad-based real-estate tax and excises”.

While Mr Hockey is probably more sympathetic to these sorts of reforms – particularly broadening the GST – than he is to borrowing more money, he has so far shied away from them for a number of reasons.

However, Mr Hockey’s opposition to reducing superannuation tax concessions puts him very much at odds with the IMF.

Again, the IMF is not renowned for its socialism, as most Greeks will tell you. However, it is of the view that Australia’s tax concessions on superannuation and capital gains are unfair.

“A number of measures, such as reducing the concessional treatment of superannuation contributions and earnings for those on higher incomes, and the discount on capital gains, would be important for fairness,” it said.