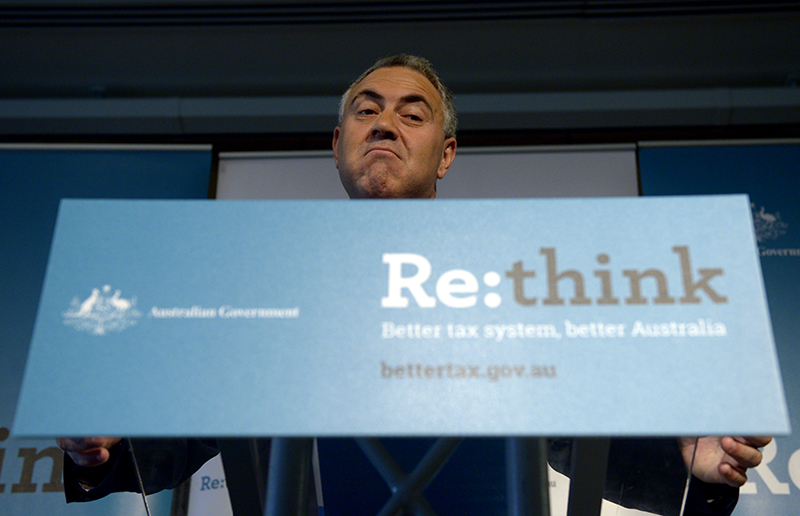 Australians pay too much income tax. That, at least, is the view of Treasurer Joe Hockey.

But is he right?

Mr Hockey may have made a lot of dubious claims since taking control of the nation’s purse strings, but this is not one of them: Australian businesses and individuals do indeed pay more income tax than most other nations.

• How to make the super rich pay more tax
• The terrifying political challenge of pension reform
• Artful dodgers: how tech giants are playing us for mugs

According to Treasury’s Tax White Paper, Australia derives more than 70 per cent of its revenue from direct income and corporation tax. That’s more than every other OECD country apart from Denmark.

The paper argues that this is stifling productivity, as businesses find other countries to operate in, and individuals either do less work or find clever ways to avoid paying the top rate.

While this last point is up for debate, the facts are the facts: by global standards Australian direct tax rates are high.

By contrast, it is important to note that Australia’s indirect taxes, in particular the GST, are low by international standards. But this article is about direct taxes.

We looked at a selection of the world’s major economies – as well as a handful of small but interesting ones – to see exactly how Australia’s income tax and corporation tax compares to the rest of the world. This is what we found:

When it comes to personal income tax, Australia’s top marginal rate of 49 per cent is almost eight percentage points above the OECD average of 41.58 per cent.

However, it is by no means the highest. For those who are willing to exchange high income tax for excellent public services, Sweden (57 per cent) and Denmark (55.56 per cent) are much more appealing destinations than Australia.

Austria, Belgium, Finland, Israel, Japan, the Netherlands, Slovenia and Spain all have top marginal rates above 50 per cent. Interestingly, this group of countries plus Australia boast eight of the world’s 10 most liveable cities, as judged by Monocle.

This suggests that, as a rule, a high level of income tax corresponds to a high level of liveability. One exception to this trend, however, is Canada. Canadian cities consistently make the top 10 or 20 lists for liveability, but Canada’s top marginal rate is an incredibly low 29 per cent.

For wealthy, income-tax intolerant Aussies who want an Anglophone alternative to Australia, the US is an attractive option. Its top income tax rate of 39.6 per cent doesn’t kick in until you’re earning a stonking $600,000 a year.

The UK also charges much less than Australia. Its top rate of 45 per cent doesn’t kick in until you’re earning $290,000 a year.

Ironically, Russia is an almost ideal destination for the income tax-intolerant. The one-time communist nation now charges its poorest workers exactly the same as its richest: 13 per cent.

But for those who can’t tolerate paying any income tax at all, Monaco, the United Arab Emirates, Bahrain and Bermuda are the ideal destinations: none of them charge any income tax at all. Which is probably what attracts the likes of Novak Djokovic, Roger Moore and Lewis Hamilton.

At 30 per cent, Australia’s corporation tax is currently higher than all but six of the 34 OECD countries, and six percentage points above the OECD average.

For businesses who don’t like paying taxes, the countries to avoid before Australia are Belgium, France, Italy, Japan, Mexico and Spain.

But above all, the country to avoid for tax-averse corporations is the USA, which KPMG says charges 40 per cent corporation tax, all told.

For businesses looking for an OECD country that doesn’t charge much tax, then Ireland is the place to go. It charges an astonishingly low 12.5 per cent. However, conditions aren’t so peachy for mining or petroleum activities on Irish territory, which are charged a special rate of 25 per cent.

While lowering corporation tax makes sense for nations competing with other nations to stimulate manufacture and service industries, for primary industries like mining, there is little need to compete. It is not as if Gina Rinehart can go and mine iron ore in Bangladesh if the tax regime here isn’t to her liking.

And given mining is such a small employer relative to the wealth it generates, a decent corporation tax is necessary if the nation wants to get any wider economic benefit. But as Ireland shows, corporation tax can be targeted.

Finally, for companies who don’t want to pay any tax at all, they can sally off to Vanuatu, Bermuda, Jersey or the Bahamas … as many do.

Australia’s income tax: is it really so high?