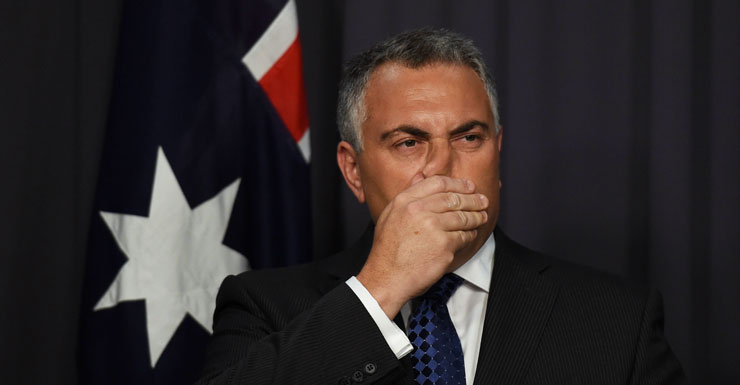 Politics in Australia has been far too exciting in recent months – a pity, because a boring performance on the national stage is what’s needed while the economy transitions from mining boom to more ‘normal’ times.

So while social media is abuzz with lefties revelling in schadenfreude, and righties trying to highlight things the government has achieved – such as its round of free-trade deals last year – all the political noise is serving to weaken an economy that is already vulnerable.

Rumours and counter-rumours about Coalition backbenchers plotting to remove Prime Minister Tony Abbott and Treasurer Joe Hockey, while they persist, don’t help. It brings to mind advice for divorcing parents – do it while the kids are young, or when they’ve grown up, but not when they’re teens.

• How making the big banks safer could cost you
• China’s long march into the Australian outback
• Working mums: do you need more rights?

In the economy’s case, the Liberal Party must divorce from its leader very soon, or get behind him all the way through 2015 and 2016. These are pivotal years.

Already, the confidence hit of the Abbott government’s first budget has exacerbated other economic woes – falling commodity prices, a sluggish global economy and the end of a once-in-a-century boom in terms of trade.

The Treasurer knows full well that low inflation, and the RBA’s record low interest rate setting, are not really “good news”, as he described them earlier this month. Both point to flagging domestic demand, and in his sleepless hours he will be haunted by the knowledge that his first budget made it worse.

The retail boom that some pundits forecast after the removal of the carbon tax did not eventuate, though the December quarter retail figure from the ABS were ultimately not too bad. A late burst of shopping just before Christmas, and strong discounted sales post-Christmas helped nudge the data up a bit.

If Tony Abbott’s various gaffes and continuing leadership speculation were not filling the front pages of newspapers, this would be the ideal time to work on consumer confidence and spur shoppers on.

In essence, the government’s biggest challenge is getting consumers to be less cautious, and perhaps a bit more hedonistic. The trouble is, consumers are still bruised six years after the worst phase of the global financial crisis.

As well as becoming less eager to borrow money, the post-GFC consumer began to save more money.

This shows up clearly in the ‘savings ratio’ depicted in the chart below: The ‘credit crunch’ phase of the financial crisis caused the savings ratio to shoot up to about 10 per cent of disposable income.

What that means is that wage earners have been spending 90 per cent of their after-tax income on consumption, and putting 10 per cent aside for retirement (leaving aside the ‘investment’ of paying down their mortgage, which economists do not include in the savings ratio).

That might sound a lot, but not when you consider that Australia’s superannuation guarantee currently forces all wage earners to put aside 9.5 per cent of their income as superannuation.

So a 10 per cent savings ratio means we’re stashing away an extra 0.5 cents in the dollar as voluntary super, extra bank deposits, or even as hidden banknotes – the RBA estimated a few years ago that retirees were physically hiding something like $50,000 per couple, on average, to rort the pension system.

When Labor lost power in 2013, it was planning to force workers to put aside even more money as superannuation. It planned to steadily increase the rate over several years from nine per cent to 12 per cent.

However, the Coalition put the brakes on that plan be freezing the super guarantee at 9.5 per cent for seven years.

Labor complains that will leave retirees with too little to fund their own retirement, and some economists have even complained that 12 per cent itself is too low a figure – 15 per cent would probably hit the mark.

On the brighter side, however, it means households have more to spend in the next few years on consumption. That’s what Mr Hockey wanted for Christmas, and if it wasn’t for all the leadership speculation he would be getting more time to say “go out, spend money, have a good time!”

He might even dream of the halcyon years of the Howard government, when we borrowed money at such a rate that the savings ratio dipped below zero (see chart above).

That is, we stashed away nine per cent, and then borrowed even more than that to buy cars, champagne, holidays … you name it.

But they were very different days, and John Howard was a very different leader. He would not, for instance, have stood up in the federal parliament to tell Australians they were in the midst of a “jobs holocaust” as Mr Abbott did last week.

That didn’t cheer anyone up.

If voters were thinking of throwing a party, it’s been put on hold for a few weeks at the very least.

Why there is no room for Hockey’s hedonism