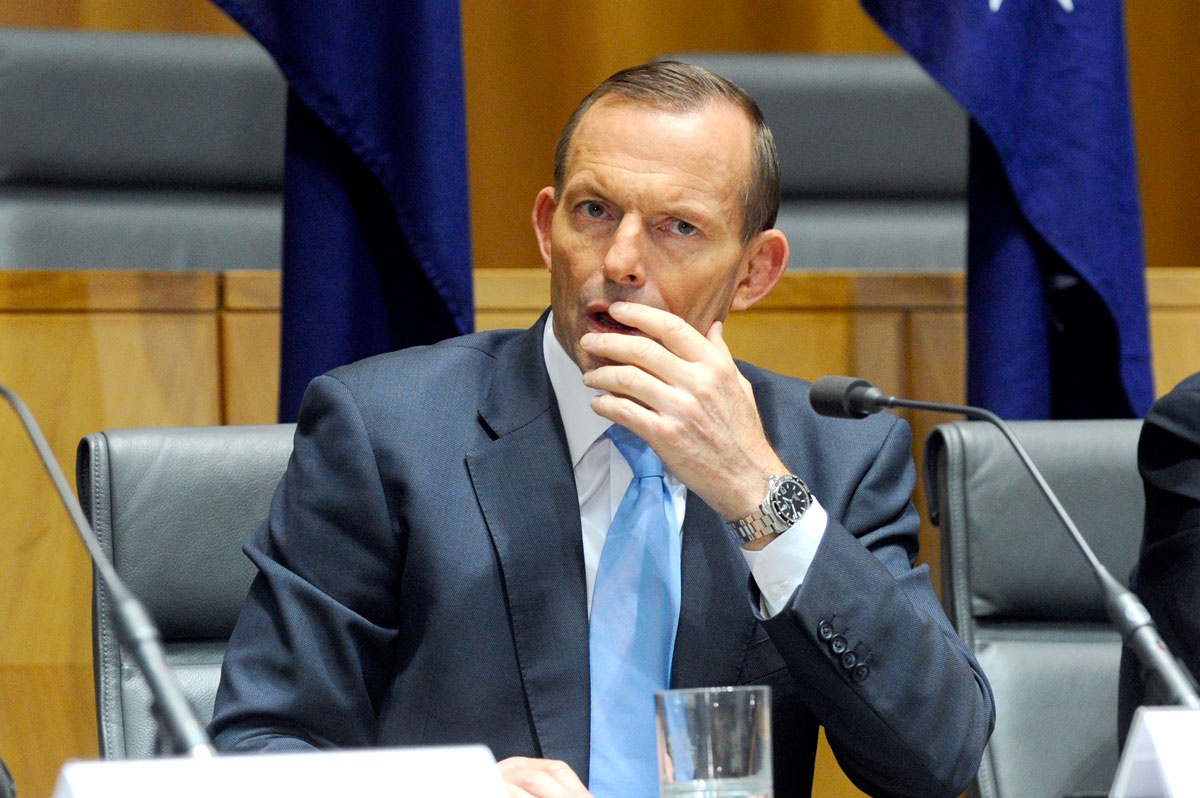 In the lead-up to the 2013 election, a News Corp columnist with whom I worked at the time returned from a Coalition briefing and wrote: “If the Coalition win, they are planning a once-in-a-generation culture change for the nation. It’s never been attempted before.”

With hindsight, it’s clear that it will never be attempted again.

It is sad, in a way, that the nation is in uproar over Prime Minister Tony Abbott’s decision to knight Prince Philip – sad because it is a distraction from more important failings.

• The RBA has done its bit. Will the banks do theirs?
• What the RBA’s interest rate cut means for you
• Big banks cut mortgage rates

Mr Abbott achieved a historic victory in 2013 because he had crafted deadly political weapons, none of which had much bearing on economic growth.

Foremost among them were “stop the boats”, “end the debt and deficit” and “axe the carbon and mining taxes”.

It is a tragedy to look back now and see how easily Mr Abbott, as opposition leader, convinced the national media that these policies constituted an economic plan.

He was so successful that even the Coalition’s ‘five pillar economy’ idea received scant coverage, compared with the daily nonsense about the carbon tax or Labor’s debt and deficit.

That’s a shame, because that is where the national debate should be.

To recap, the Coalition wanted to see a rebalancing of the economy away from a heavy reliance on booming resources prices, which were at the time just coming to an end.

Aside from mining, the Coalition said, we should look to new growth in tourism, manufacturing, agriculture and education.

That was a good call, because even then many economists considered that the Australian dollar must fall against other currencies in the months ahead – as it has, falling from a peak of nearly 110 US cents to around 78 cents today.

That is flowing through to increased activity in some areas of manufacturing, education ‘exports’ (by which we mean imports of overseas students), and tourism.

The struggling Tasmanian economy is seeing its lowest hotel vacancy rates for years.

Given all of that, one might suppose that Tony Abbott would be showered with praise rather than with the verbal manure currently flying about.

However, this is where politics and economic policy come together with a crunch.

Voters had been reassured, ad nauseum, that the $550 per household savings from the repeal of the ‘big new tax on everything’, the carbon tax, would trickle through the economy like life-giving rain.

Businesses would expand, and jobs would bloom like wildflowers. It was a beautiful dream, but bordering on the unhinged as an ‘economic plan’.

When Labor’s disastrous ‘resource super profits tax’ was hurriedly re-written by Prime Minister Julia Gillard in 2010, the big miners had convinced the nation that had the RSPT stayed, they’d have pulled billions of investment dollars out of Australia.

That line was lapped up by over-tame journalists and the nation came to believe it.

But it was rubbish.

Any marginal investments affected by either of those taxes would have made little discernable difference to our GDP numbers – though perhaps would have shaved a few cents off the dividends of the big miners, which caused some angst to the two-thirds of their shareholders who live overseas.

And as for ‘debt and deficit’, it seemed not to matter that Australia was one of the least debt-laden nations (in public debt – we’ve streaked ahead in private debt) in the world.

Mr Abbott made the debt hangover from the GFC-era stimulus packages feel like a millstone around the nation’s neck.

It wasn’t. It isn’t. There are much bigger economic problems to solve.

Indeed, rogue backbencher Dennis Jensen let the cat out of the bag in his startling ABC interview on Tuesday.

Quite right Dr Jensen. But how does one encourage growth?

It’s hard to be sure, because so far the Abbott government has concentrated on that “once-in-a-generation culture change”, smugly confident that economic growth would follow.

Nope. It’s an acknowledgement that the delicate transition from a decade-and-a-half of mining boom to a more balanced economy has been severely disrupted.

There are numerous ways in which the ‘economic plan’ has interfered with growth. Sheer caprice is one of them.

As I wrote for News Corp last year: “Why refuse aid to SPC [Ardmona], but give it to Cadbury and Huon Aquaculture? Why bail out Qantas and drought-stricken farmers with cheap debt, while slapping a 1.5 per cent parental leave levy on our 3000 biggest businesses? Why rant about budget deficits while shovelling $9 billion into the Reserve Bank’s coffers for a raining day? Why promise more publicly funded water infrastructure in rural communities, but block private sector grain logistics investment in GrainCorp? Why scare off our mildly subsidised auto-manufacturers while signing free trade agreements to import more heavily subsidised cars from abroad?”

But then all of that paled into insignificance alongside the crushing effect of last year’s budget on consumer confidence (see chart below). By launching an assault on welfare recipients, putting Australia on a fast-track to federal-state funding reforms, and breaking promises on funding the ABC and SBS the “no surprises” government surprised everyone.

Australia was not ready for a 100-day culture change – voters weren’t putting ‘cheezel eating x-box playing dole bludgers’ at the top of their agenda.

They didn’t want to pay cash top-ups for Medicare, or to see their state governments lose education and health funding from Canberra.

It was a shock-and-awe strategy that disproportionately hurt the lower socio-economic groups – on the long-term promise that they’d have more jobs in the future.

The resulting fall in confidence plumbed depths not seen since the global financial crisis.

In fact, you’d be forgiven for thinking there was no GFC. The Abbott leadership team has ensured none of its MPs ever mention it.

Instead, even during the Prime Minister’s speech at the Press Club this week, the intelligence of voters has been insulted time and again with the insistence that Mr Abbott’s political fixation on ‘debt and deficit’, ‘the carbon and mining taxes’ and the signing of hot-air free-trade deals would get things back on track.

Far better would have been to preserve confidence, foster jobs and growth, and, as the Business Council of Australia (often accused of making the Coalition its puppet) has done, show voters how a gradual, long-term return to surplus can be achieved.

And it must be achieved. The budget has been in structural deficit since the last two Howard government budgets, and with growing health costs for an ageing population, plus new expenditure such as the NDIS, big changes are needed.

But hammer blows to confidence and ‘shock and awe’ changes won’t get us there.

That strategy will never be tried again because it doesn’t foster economic growth, or even a “change of culture”.

All it may achieve, ulitimately, is a change of leader.