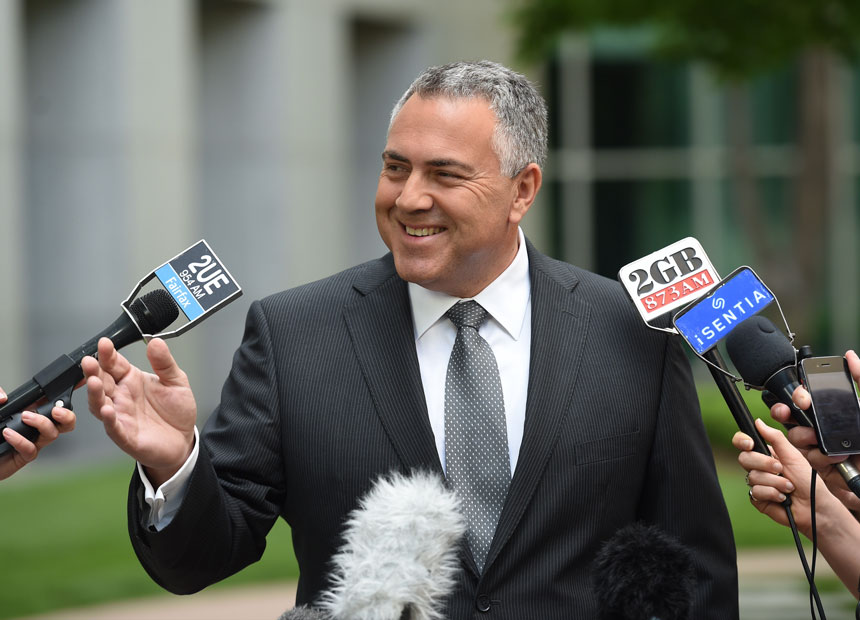 This year’s MYEFO statement doesn’t tell economists anything they weren’t expecting, but it brings into the sharpest relief yet the ‘monkey trap’ of the Australian tax system.

Most people have heard the apocryphal tales of such traps. One version is a hollowed out coconut shell, re-fastened around an orange. A hole in the shell is big enough for a monkey’s hand to go in, but once holding the prize, the hand cannot be removed – and, supposedly, the monkey is not smart enough to let go of the orange when the hunter approaches with a net.

A very similar scenario is spelled out in MYEFO. Some of us are holding very juicy oranges, and because we won’t let go, the governance of the nation and the economy itself look doomed to deterioration.

• Paul Bongiorno: How the budget update fell hostage to events
• Rob Burgess: Joe Hockey has some growing up to do
• Government’s super tax take to double in five years
• Hockey delivers ballooning debt and deficit

In this case, the coconut shell is made up by a complex and inequitable tax system, and the orange is made up of segments called ‘tax expenditures’ – you can see a full list of them on page 74 of the MYEFO document.

That table lists various tax concessions that were introduced for various reasons.

Capital gains tax exemptions and discounts introduced by the Howard government, for example, were supposed to increase the volume of capital transactions in the economy and actually increase the amount of tax revenue raised – a textbook example of a well-known paradox of ‘cutting taxes to raise more revenue’.

There are many cases where that paradox actually works, but not in capital gains tax where the discounts and exemptions now total $31.5 billion this financial year.

That is not to say that these tax laws can simply be unwound to tip that money back into the budget bottom line – they can’t.

However, they will have to be examined in next year’s tax white paper and the voting public should be on their guard for bogus defences put up to protect those concessions, because they are likely to put the interests of the owners of large assets before the need to breathe new life into a flagging economy. More on that another day.

Above those items in the MYEFO table are the most glaring example of the monkey-trap oranges. They are superannuation tax concessions that reduce the rate of tax on money going into our super accounts, the tax levied on earnings within those accounts, and make distributions in the ‘pension phase’ of our super accounts tax free.

Before looking at those in detail, it’s very important to recognise that elements of these concessions have legitimate purposes.

When Paul Keating set up the ‘superannation guarantee’ in 1991, he gave tax concessions on contributions to encourage people to save as much as possible. The aim was to create a pool of national savings that would give us ‘retirement income’ that was not a state-funded pension. And so not taxing the ‘pension phases’ seems to make sense too.

All good so far.

The problem, highlighted again in MYEFO, is that the purpose of these tax breaks has largely changed. They are now worth $36.25 billion in forgone tax revenue, in a year where the ‘horror’ deficit is $40.4 billion.

The volumes of money washing through the super system, particularly the burgeoning self-managed super fund (SMSF) sector where balances tend to be much higher, mean that a large portion of those tax breaks is being used for ‘wealth management’ or ‘estate planning’ purposes.

This was most recently highlighted by the Grattan Institute in its report The Wealth of Generations, published last week – and let’s remember that this is from a think-tank set up by Labor’s Steve Bracks and the Liberal’s Peter Costello to cut through partisan debates. As this chart (right) shows, about half the super tax concessions are paid to the wealthiest 20 per cent of Australians. There is nothing ‘immoral’ about them using the tax system to its full advantage to minimise tax. That’s why we use accountants at tax time.

However, the tax system has become skewed towards wealth management rather than a fair distribution of the tax burden.

There is not only a moral argument against asking everyday families, with everyday super balances, to shoulder a higher tax burden than is necessary – there are also robust economic arguments against the status quo.

But when Treasurer Joe Hockey looks at a budget that now seems virtually impossible to balance, he bases budget repair on cutting spending that is damaging confidence and slowing economic growth – which will produce even lower tax revenues.

And Labor, by contrast, is still pretending that it won’t have to make any of those cuts but will magically be able to afford all that without tax increase – a fantasy all of its own.

But with the Coalition planning to let the overall tax take rise to only 23.9 per cent of GDP, the question must be asked – why was it okay for the Howard and Hawke governments to let taxes rise to 26 per cent of GDP? Yes, going beyond that would probably create a fiscal drag on the economy. But 23.9 per cent won’t pay for services Australians want.

And why are we returning such large tax concessions to wealthy Australians to hit an arbitrary, and low, tax-to-GDP ratio?

Next year, a ‘grown-up’ debate on tax reform is planned. It’s imperative for the Australian economy that a few people let go of juicy oranges, free up a bit more tax revenue for essential services, and get confidence, investment and economic growth moving again.