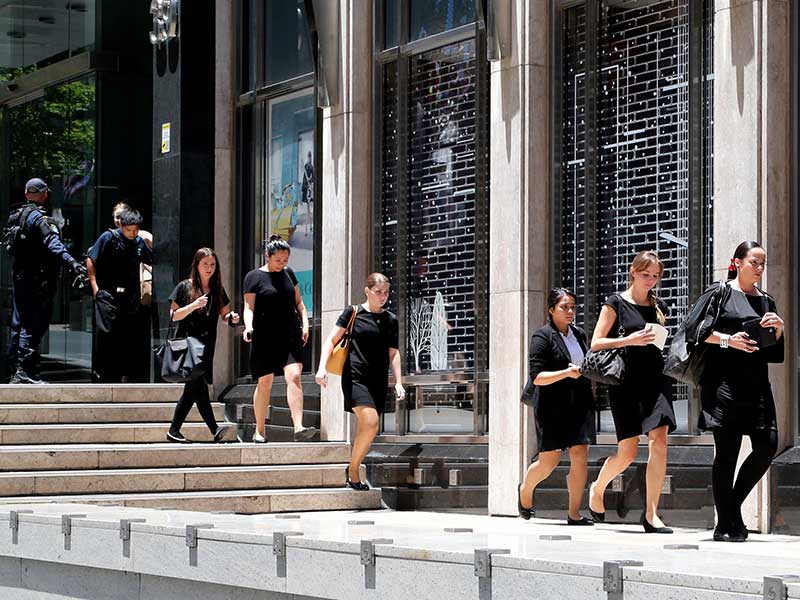 The heart of Australia’s financial system has been shut down by the Martin Place hostage siege, with some key banking executives being evacuated from the area.

The headquarters of the Reserve Bank in Martin Place saw staff  evacuated about 3pm and the  Sydney CBD operations of Westpac and MLC were  disrupted.

Macquarie Group was  forced to evacuate its global headquarters at 50 Martin Place which is within a stone’s throw of the Lindt Cafe.

“Given uncertainty around the situation in Martin Place, Macquarie Group is relocating certain staff from its 50 Martin Place building to other Macquarie premises in Sydney,” said Macquarie spokesperson, Lisa Jamieson.

“Other staff in the building will work from home,” she said.

National Australia Bank has closed seven branches in the Sydney CBD and the Martin Place offices of its MLC wealth management operation is in lock down.

Staff have been seen leaving the Westpac tower in Martin Place directly opposite the hostage scene and the Commonwealth Bank has closed 12 branches in the city, including the historic branch at 48 Martin Place.

“The safety and security of our people and customers is paramount, our employees at the branch are accounted for and our customers have been safely evacuated,”said a CBA spokesperson
David Lording, the principal of corporate communications company, P&L, which has offices about 100 metres from the siege said he had been advised by his building manager to keep staff indoors.

“Our building manager has been receiving advice from the police and we’ve been told to stay put,”
Mr Lording said.