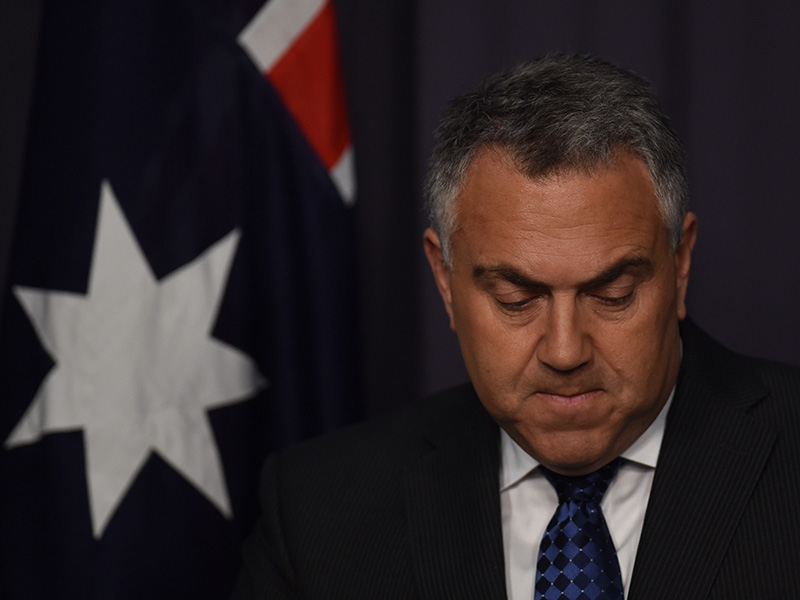 The question at the heart of this year’s mid-year economic and fiscal outlook statement is where the economy would be now without the wave of fear and pessimism that rippled through the nation after the May budget.

Consumer and business confidence, which were supposed to bounce back once the “grown-ups” were back in charge in Canberra, were not rising as expected before May, and the budget, which contained far too many surprises and which hit low income Australians hard, didn’t help.

So when Treasurer Joe Hockey fronted journalists to explain why projected deficits had blown-out – by a whopping $100 billion over the forward estimates – he put the blame squarely at the feet of the commodities price slump and falls in the terms of trade.

What Australia is selling the world is less valuable than it was back in May, and most economists have been surprised by the precipitous fall in iron ore prices – the consensus forecast at budget time was $94 a tonne, and it’s now trading at around $60 a tonne.

But Mr Hockey knows that there are other major forces at work, and they can be seen clearly in the amount of money the government is collecting in taxes.

The Australian tax system grows more unbalanced each year, with income taxes and company taxes bringing in the lion’s share of revenues, when economists broadly agree that indirect taxes such as the GST and capital-gains tax need to do more of the heavy lifting.

In the MYEFO forecast, total tax receipts for this financial year have slipped since the May budget from $360.4 billion to $353.6 billion.

The good news, in economic terms, is that the GST forecast has hardly changed at all over the past seven months. That means that in broad terms we haven’t lost our ability to prop up the consumption side of the economy, even if spending isn’t growing as fast as Treasury would like.

The bad news, and the two numbers that tell us most about what is happening, is that the company tax forecast fell 3.7 per cent, or $2.6 billion, and the amount of income tax flowing in is set to be 1.3 per cent less, or $2.3 billion.

Company tax is more easily linked to the abrupt slowing of the investment phase of the mining boom than is the income tax shortfall. While miners are not big employers overall, their supply chains reach deep into the Australian economy and many small businesses in those chains did well out of the boom years.

But the income tax decline is more worrying as it highlights two trends that everyday Australians are starting to feel directly.

The first is underemployment. While Mr Hockey boasts that jobs are being created at three times the rate seen last year, and hence are stopping the unemployment rate going off the dial, many casual and part-time workers in existing jobs are not getting the hours they want. These workers are simply not captured by the headline unemployment rate – now forecast to rise to 6.5 per cent next year.

Executive director of the Council of Small Business of Australia (COSBOA) Peter Strong told The New Daily on Monday that SME (small and medium enterprise) confidence has been rattled after the May budget, meaning that many of the two million business owners in that sector are reluctant to increase staff hours, or are decreasing them, for the five million people they collectively employ.

Mr Strong pointed in particular to the winding-back of tax breaks introduced by the Gillard and Rudd governments in 2012 and 2013 – the ‘instant asset write-off’ was decreased from $5,000 to $1,000; accelerated depreciation on vehicles was scrapped and the ‘loss carry back’ scrapped.

These changes were not well communicated by the government, and some SME owners will still be finding out via their accountants that they’ve lost large tax concessions.

Worse, many of those SMEs who did find out early, have been shaken by the experience. It is their rattled confidence that is showing up in the drop in income tax receipts as they hesitate to take on new workers, or give enough hours to the part-time and casual staff they already have.

Well bracket creep is just not doing the job it was supposed to be doing only seven months ago.

With the tax-to-GDP ratio still well below its long-term average, the government has a big job ahead on tax reform. Blanket opposition from Labor to the process won’t help.

For now, however, Hockey cannot get away with claiming all of the revenue write-downs come from the commodities slump and terms-of-trade reversals.

This government has shaken confidence, and has a long way to go in getting business investment and job creation back on track. Until such time, like Labor, it will have a revenue problem that cannot be addressed by drastic cuts alone.