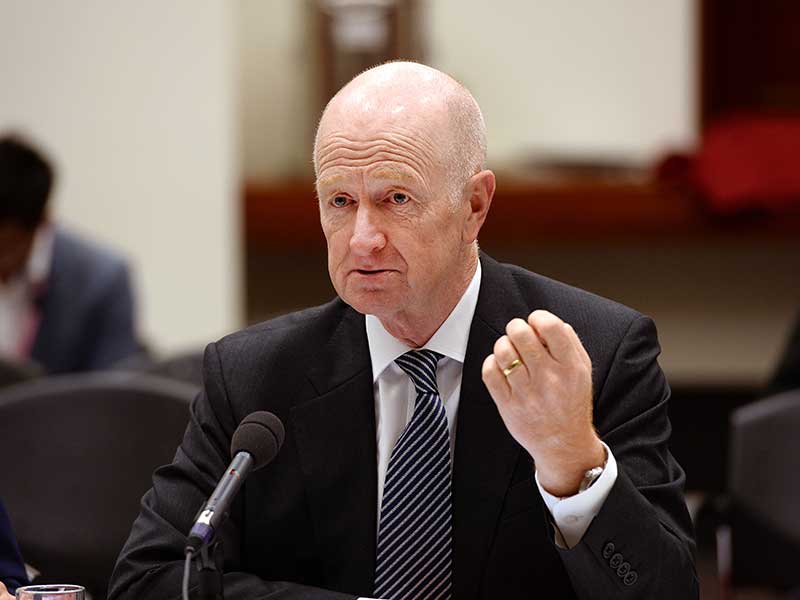 He also took aim at the Australian dollar saying even current levels of around US82c were too high and he wanted to see the currency at US75c.

Mr Stevens took said federal politicians to task saying they needed to abandon “slogans and name-calling” and get serious about fixing the budget.

If not investors could eventually lose patience resulting in a credit downgrade which would mean higher borrowing rates for the Federal government on its $240 billion debt.

“I don’t want to get into a detailed discussion of budget measures and so on, but I think the past year shows that this is not an easy conversation to have,” Mr Stevens told the Australian Financial Review on Friday.

“It’s very difficult, and it will require strong political leadership I think, not just from the government, but from other political parties and individuals who claim to be serious. “You have to have a serious conversation about this stuff and not get into slogans and name-calling and that stuff.

“The serious issue is that five-year horizon.”

The Australian dollar fell as low as 82.15 US cents overnight, after Mr Stevens said the currency needed to get down to 75 US cents.

Asked if further rate cuts would harm sentiment, Mr Stevens said any additional stimulus would need to be linked to a “confidence-enhancing narrative”.

“A positive narrative might be inflation is not any impediment to even lower rates if they would be helpful,” Mr Stevens said.

“And you would still expect, I think, that lower interest rates are stimulatory for the economy. But we’re certainly reaching levels where, for those who have interest rates as their income, the income effect on them is clearly quite something to be thought about.”

“A calmer housing market probably also will be part of (that narrative), and a sense that such an action would actually help confidence,” he said.

“The more confidence we can have that we’re not going to artificially inflate (the housing)  market and give ourselves a problem down the track – that’s a complication I can do without and, to the extent that supervisory measures are able to help there, I think that’s good.”

RBA chief calls for Canberra to fix the budget