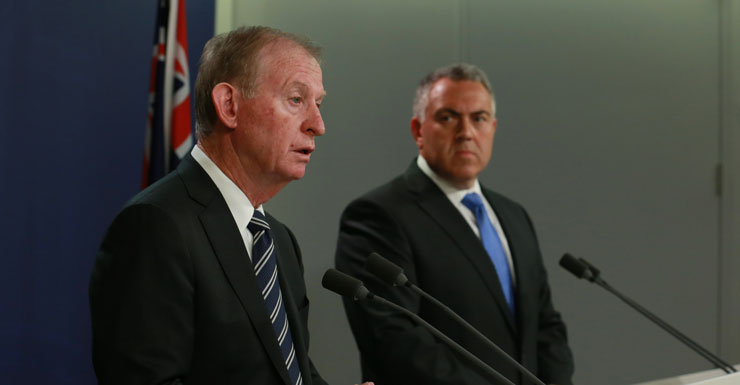 Financial system inquiry chairman David Murray has thrown down a challenge to the Abbott government, saying that legislators need “to go beyond” the Future of Financial Advice reforms to protect consumers in the financial services industry.

Speaking at a Committee for Economic Development lunch in Sydney on Monday, Mr Murray said his inquiry’s recommendations would impose greater obligations on investment product providers and distributors to provide suitable advice to clients.

Murray’s push to extend the FoFA reforms is looming as the most controversial feature of his blueprint for the financial services industry because it appears to be inconsistent with the Abbott government’s recent effort to water down financial advice laws.

The Gillard Labor government introduced the FoFA reforms in 2013, which included a ban on sales incentives for financial advisers.

But earlier this year, the Abbott government tried to reverse the incentives ban, before it was thwarted in the Senate.

Now, Murray is proposing to widen and deepen the prevailing consumer protection architecture that the government is already hostile towards.

The Murray inquiry says financial advisers should be bound to provide only “suitable” advice is given to consumers.

Importantly, it is also proposing that the producers of financial products – banks, fund managers, insurers and super funds – also be legally required to design products that only target the needs of customers.

“What we’re saying about the (financial services) system is that the product manufacturer needs to consider what information is made available and whether advice is needed or not – this is where we go further than FoFA,” Murray says.

“Our recommendations … are intended to reduce the risk of consumers being sold poor quality or unsuitable products.”

Murray likens his proposals for improving consumer protection in financial services to the regulatory framework of the pharmaceuticals industry.

Under existing health laws and professional codes, the obligations of drug manufacturers, chemists and doctors vary according to the health risks associated with different drug products.

The duty of care obligations of health industry experts are relatively light for consumers wanting to buy vitamin C supplements.

They get more onerous when chemists decide to recommend pseudoephedrine to treat hay fever sufferers.

Raising the standard of financial advice

This tiered structure of responsibility is what the Murray inquiry wants to introduce in the financial services industry.

The equivalent of a low-risk vitamin C supplement in the financial services industry might be a digital travel card that you purchase and reload with cash credits. Not much advice is needed with such low-risk products.

The regulatory bar might be raised for credit cards and personal loans, where the person selling you the credit product requires some level of training.

It should be raised even higher for home loans.

Mortgage brokers might be analogous to chemists in the drug industry because they are giving advice to consumers about products that carry material risks.

However, the prevailing entry requirements for mortgage brokers are much less onerous than those that apply to chemists.

Murray wants people who claim to be financial advisers to be subject to a rigorous accreditation.

In the Murray analogy financial advisers occupy a similar role to doctors because they advise on the overall financial health of clients.

Financial advisers not only have to recommend products to build and protect wealth, they should also be prepared and qualified to alert clients to unsuitable investments.

The Murray inquiry recognises that lax accreditation rules have contributed to the advice scandals at prominent institutions in recent years.

But Murray’s recommendations are not just targeting advisers.

In line with the pharmaceutical industry model, Murray is arguing for the producers of financial products to be made more responsible for the investment offerings they market through advisers, a move likely to be strongly resisted by the banks.

Will the government deliver on Murray’s proposals?

Consumer advocates are optimistic that the momentum created by the Murray inquiry’s findings will persuade the government to support further strengthening of consumer protection.

“I think there is a sense of momentum which will be hard to stop,” says Choice CEO Alan Kirkland.

“The strengthening of FoFA laws is now a matter of ‘when’ not ‘if’.”

Mr Kirkland said the government had already indicated that it would abandon its program to restore sales incentives for financial advisers.

“We’re now arguing strongly that the government implement the Murray recommendations,” he says.

“We hope the inquiry’s recommendations don’t get lost in the political argy-bargy that is to come,” he says.

“The government has to respond to what Murray has put out there.”

Despite the consumer lobby’s expectation that the government will have to accommodate the inquiry’s wide-ranging advice, it still seems difficult to imagine that Senator Cormann would be prepared to take ownership of a Murray-inspired legislative program.

Perhaps a ministerial reshuffle – flagged this week by Prime Minister Tony Abbott – might allow the government to make that adjustment.

‘Get tough on financial advice’