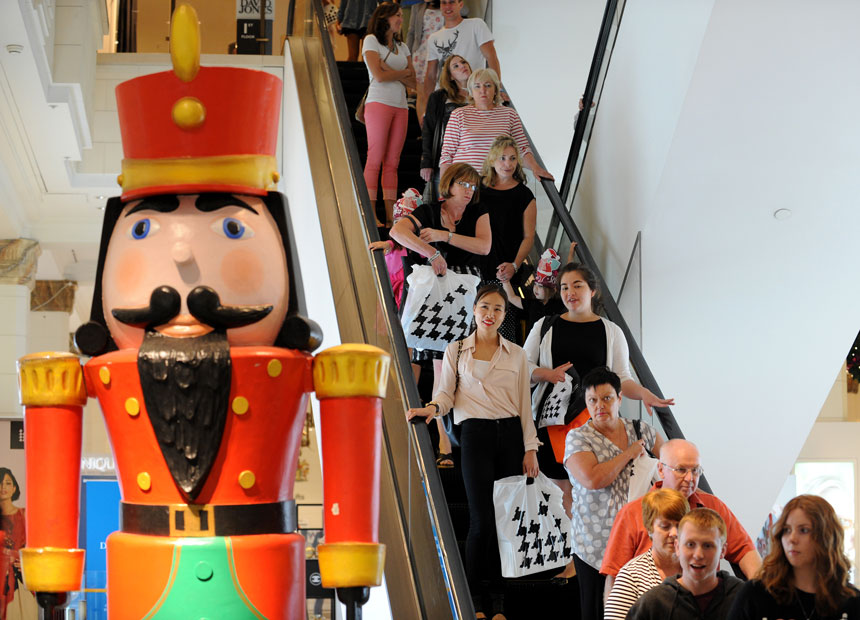 Private debt globally has sparked a warning from the IMF. Photo: AAP

Go shopping. That was the message from Treasurer Joe Hockey after he saw the latest numbers on the health of the national economy.

“Not just for Santa Claus but for Australia,” he said, hoping to spur economic activity ahead of the Christmas shopping season.

• Dollar plummets below 84 cents as economy stalls
• Interest rates confusing? Here’s the deal in 2015
• Online spending hits a record $16b

Mr Hockey was responding to the latest national accounts that showed the economy grew by just 0.3 per cent in the September quarter, less than half that expected by economists.

It was the slowest quarter of growth since March 2013 and meant annual growth slipped to 2.7 per cent from 3.1 per cent as of March.

Shadow Treasurer Chris Bowen says Mr Hockey should stop lecturing people on how to spend their money this Christmas.

“It might help if he stopped taking $6000 off them as he’s trying to do through his budget,” Mr Bowen said.

He said the Treasurer should release his mid-year budget review as a matter of urgency and use it as an opportunity to admit his errors and start again.

To misquote Paul Keating, the economic data was an ugly set of numbers.

The economy not only grew at less than half the pace economists had expected in the September quarter, but the pattern of growth gave no reason to hope for an imminent resurgence.

The 0.3 per cent rise in gross domestic product was the slowest since floods and cyclonic weather pushed the economy into reverse in the first quarter of 2011.

The disappointing data pushed the Australian dollar below 84 US cents for the first time in four years and sparked fresh talk of a possible interest rate cut by the Reserve Bank in 2015.

That small advance in GDP will do nothing for employment.

Outgoing Treasury Secretary Martin Parkinson issued a strong warning about the numbers. They were “a serious warning to us as a nation that unless we tackle structural reform, including fixing our fundamental budget problem, we will not be able to guarantee rising income and living standards for Australians”.

No cause for panic

He reiterated the government’s determination to push ahead with its economic reform agenda.

“These national accounts confirm that when it comes to the future of Australian economy, complacency is our enemy,” he said.

“Doing nothing on economic reform is not an option for our country.”

But the news was uncomfortable for households, with data showing disposable incomes had dropped for two quarters in a row, prompting Mr Bowen to assert that Australian incomes were in a recession, the first since the GFC.

It may not be the last time the Treasurer stands before the Australian people with uncomfortable news.

On Tuesday, the Reserve Bank of Australia forecast GDP growth would be “a little below trend for the next several quarters”, meaning it’s probably not the last ugly set of numbers Mr Hockey has in store.