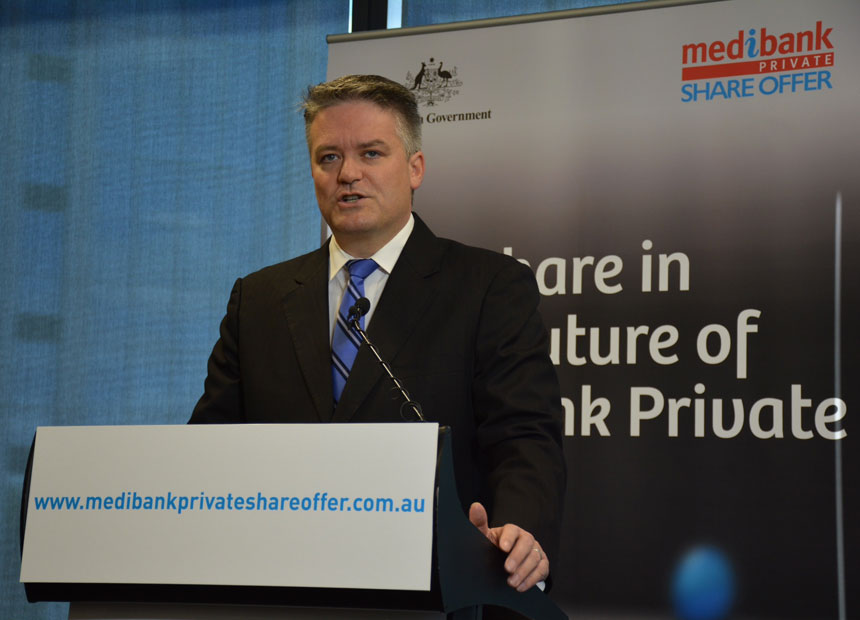 Thousands of investors who acquired shares in Medibank Private through the introductory public offer have cashed in their chips early at a big profit.

Medibank’s scrip opened on the Australian Securities Exchange this afternoon at $2.22 but tapered to $2.20 after the first hour of trading.

Most of the early trades involved small shareholders offloading their investments, but stock exchange records show that several institutional investors are also moving in to take profits.

There have been several monster sales by professional investors, including one at 1.13pm for 2.31 million shares worth $5.1 million.

Retail investors are claiming gains of up to 11 per cent on the $2 they shelled out for their shares.

In its first hour on the ASX, investors traded almost 244 million shares valued at $ 539 million.

Perhaps the biggest concentration of tv cameras at the ASX ever.
@medibank #medibank pic.twitter.com/Fq01CJ2r2V

Federal Finance Minister Mathias Cormann declared the listing an historic day, saying he looked forward to the judgement of the market on work done by the government and those involved in the float.

“We believe that Medibank Private in private hands will perform better than under government ownership,” Mr Cormann said.

“It’s a win for all Australians with private health insurance.”

Managing director George Savvides said the stock market launch was a day that “we’ve been looking forward to for some time.”

“It’s sobering to reflect this is the largest IPO since Telstra and the third largest IPO in the world in 2014.”

At 1.20pm the number of sellers in the market outnumbered buyers two to one.