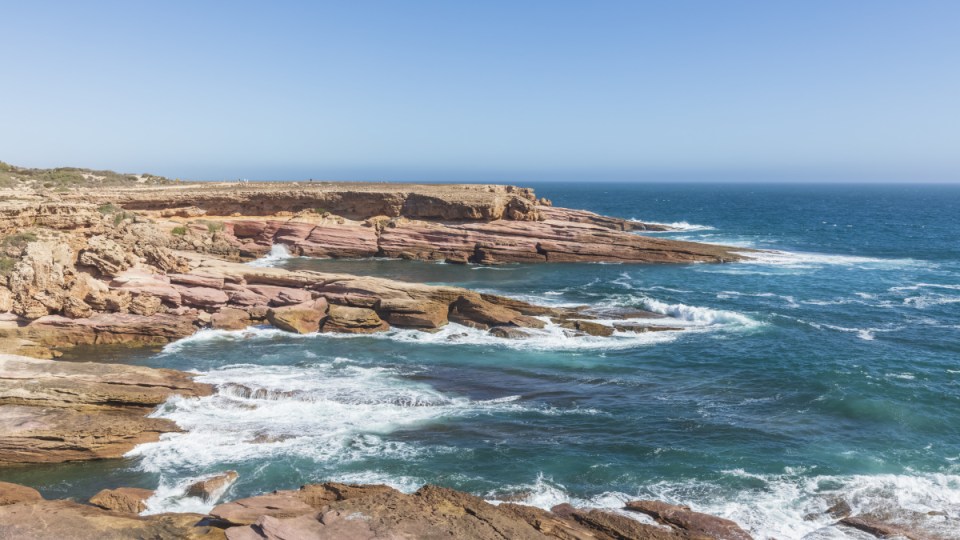 Camping atop South Australia’s Bunda Cliffs overlooking the Great Australian Bight was one of Catherine Best’s most special experiences.

The writer was on holiday with her young family – and she didn’t have to break the bank to visit such a breathtaking place.

In fact, it was free.

Ms Best, whose book Ultimate Caravan Trips Australia is due for release in 2022, has travelled 21,000 kilometres in her caravan across Australia with her husband and three children this year.

She said fuel and accommodation are the biggest expenses on the road.

Planning ahead to find affordable accommodation, fuel and multi-pass specials for sites like national parks helped her family stay within budget.

Here are her tips for sticking to a budget if you are planning to hit the road after lockdown ends.

If you sort out your finances so you can buy on the day, you can snag some good deals at caravan and camping shows.

Ms Best and her family bought their caravan a year before they left for their trip, so they were able to buy many items on sale.

“When you get a caravan there is a lot more to it than, ‘hooray we’ve got a caravan’, and setting off.

”There are accessories and things that go along with it, which really added up.

“It would have been a few thousand dollars extra, so by having time to plan and research we were able to make informed decisions about what we needed and then compare prices.”

If you are thinking of buying a caravan you will also need to factor in costs like linen, crockery and utensils, and you may also want to buy items such as awnings, solar blankets and a portable fridge.

Fuel is one of the biggest expenses if you’re driving around the country and where you fill up heavily influences how much you pay.

“The first petrol station when you enter a town, particularly if it’s in the middle of nowhere, will generally be the most expensive because they know that people are running on empty and that they don’t know how many petrol stations there are going to be in town,” Ms Best said.

She said her family carried with them two jerry cans of fuel, which they used to top up their tank so they could get to the next town with decent price competition and avoid having to pay a lot for diesel at remote road houses.

The family also travelled five kilometres under the 100km/h speed limit, which was good for fuel economy as it meant the engine wasn’t working so hard.

“We worked out that over our trip we covered about 21,000 kilometres and we saved almost $1000 in fuel just by travelling five kilometres below the speed limit.”

Ms Best said you can fork out as much as $100 a night for a caravan park site, and more during peak times, so her family opted to stay at several free or low-cost camps, such as Sandy Cape Recreation Park, which is about a three-hour drive north of Perth.

“It is right on the beach so our caravan was basically behind a dune and a few steps from the beach, this beautiful sheltered cove, and it cost us for a family of five, $22 a night,” she said.

She also stayed at a free camp on the Bunda Cliffs.

“We literally camped up on the clifftop overlooking the Great Australian Bight and it was just an incredible experience, which cost us absolutely nothing.

“If you can throw in a few free camps and low-cost camps, it’s a great way to save hundreds of dollars or thousands of dollars if it’s a trip for a few months or a year.

“They were actually some of the greatest caravanning experiences that we had.”

You can find a list of free and low-cost camps on app WikiCamps Australia, which is the nation’s largest database of campgrounds, caravan parks and hostels.

Discounts range from 10 to 20 per cent at caravan parks by joining membership programs like G’day Parks, BIG4 Holiday Perks and RAC.

Before you leave, it is worth researching the most economical way to visit key sites.

For example, in Western Australia many national parks have a daily $15 per car fee but you can buy a pass for four weeks, 14 days, five days or one year, which is a great way to save money if you are away for an extended time.

It is also worth investigating if there are multi-attraction passes in the region you are visiting.

There are also sightseeing passes available in areas like Margaret River that provide discounts from tourism operators, cafes and restaurants.

Self-catering is the best way to cut your food spending on a trip and pubs can do happy hours or kids specials.

“When you’re a family of five and you are out sightseeing for a day and you didn’t think to bring lunch and some snacks with you, stopping off at a bakery can easily cost you $40 or $50,” Ms Best said.

Picnics are a great way to have special travel experiences that don’t cost a lot, she said.