Fake reviews are hiding across the internet ahead of Christmas. Here's how to spot them. Photo: TND

Christmas shopping is just around the corner, with Black Friday and Cyber Monday online sales now less than two months away.

But there’s plenty to watch out for this year.

As ecommerce has spiked during the pandemic so have the number of fake reviews online.

Businesses and other bad faith actors are trying to fool consumers into buying dodgy stuff or lure them into scams, with recent research finding 95 per cent of shoppers read reviews before buying a product online.

Review.org surveyed 1000 Australians and found 52 per cent had fallen for fake reviews, while 26 per cent were unable to spot fakes.

So, what can you do to protect yourself while shopping online?

How to spot a fake review

Australians love to read reviews before buying a product or visiting a restaurant, but that also creates an incentive to fake them.

The Australian Competition and Consumer Commission has fined several companies hundreds of thousands of dollars in recent years after it found they were manipulating reviews or posting fakes.

The practice is widespread and will fuel an estimated $1.2 billion in retail sales over 2021, according to recent Baltimore University research.

Luckily, several red flags help separate a fake review from a real one.

The ACCC has some advice on the topic, saying consumers should look out for reviews that are overwhelmingly positive or web pages that have no negative feedback.

The consumer watchdog said there should usually be at least some one-star reviews.

You should also look out for multiple reviews posted on the same date or that use similar language. This indicates that a computer wrote them.

And if it appears as though a robot wrote the review, then a robot likely did. 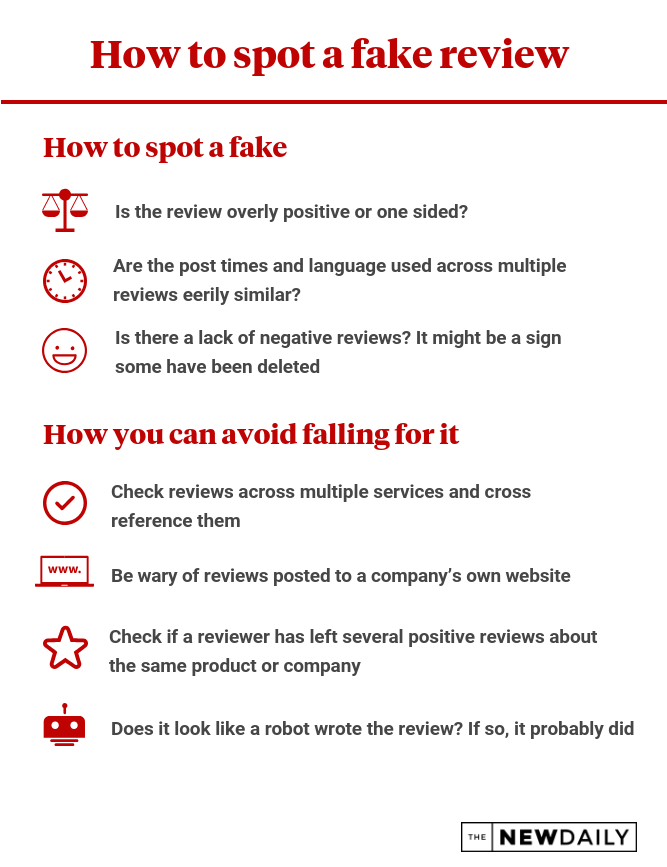 “Businesses may also post fake negative reviews about their competitors to gain an advantage in the market.”

Consumer psychologist Adrian Camilleri at the University of Technology Sydney (UTS) has also researched fake online reviews and has come up with a few tips for consumers looking to spot fakes.

How to research a product

The bottom line is that some reviews will be faked so well that you fail to spot them.

With that in mind, it’s helpful to research products in a way that reduces your reliance on any one source of information or website.

Before buying a product, check out multiple review websites and filter for negative reviews first – that way you can see where things went wrong.

Ignore reviews posted to the websites of businesses selling products, as they ultimately control what information is included and what is excluded.

Reviews posted to marketplaces like Amazon can be more trustworthy, because they have verified purchaser tags.

But it’s worth noting that anyone can purchase their own products and leave a review with a burner email (i.e. one not attached to their real identity).

Louise Grimmer, senior lecturer in marketing at the University of Tasmania, said it’s also best to avoid the one- and five-star reviews and pay more attention to the three and four-star assessments.

“Head for the middle,” Dr Grimmer told The New Daily.

“You are much more likely to get a realistic picture of the product or service you are interested in.

“Fake reviews tend to fall on either end of the spectrum – something is either spectacularly bad or absolutely amazing and these types of reviews often turn out to be fiction rather than fact.”

Consumers can also refer to online tools for assistance in identifying fake reviews.

Fakespot.com is a neat little tool that can be added to your browser, and it automatically spots potentially fake reviews when you are shopping online.

It is particularly useful on Amazon, where fake reviews can be harder to spot because there are so many different products on its vast platform.

An alternative service to Fakespot is ReviewMeta.com.

How to avoid dodgy products and spot fake reviews