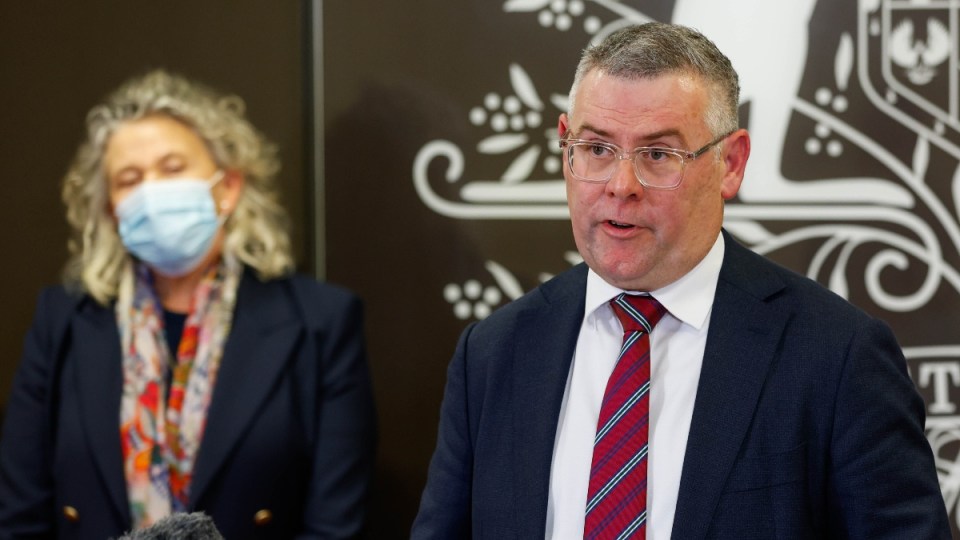 Murray Watt says there is absolutely no evidence foot and mouth disease is in Australia. Photo: AAP

Australia is ramping up biosecurity in the face of a worsening foot-and-mouth outbreak in Indonesia, the closest the disease has been to Australia in decades.

An outbreak of the highly infectious disease could cost Australia’s livestock industry $80 billion, leading to calls for an Indonesian travel ban and leaving farmers unsure about the future value of their cattle.

Despite the potentially huge ramifications, authorities and industry leaders are keen to stress that Australia’s biosecurity measures are working.

They say an overseas outbreak is nothing new and that spreading alarm or misinformation could jeopardise Australia’s cattle industry.

What is foot-and-mouth disease?

Foot and mouth (FMD) is a viral disease that affects cloven-hoofed animals, such as cattle, sheep, pigs and goats. Humans cannot catch it.

The virus causes a fever, followed by painful blisters on the gums and feet that can cause lameness and even death.

Australia is one of the few countries in the world whose livestock and meat products are deemed free from FMD.

“So if we had an outbreak of foot-and-mouth disease in Australia it would be catastrophic.”

What would an outbreak mean for Australia?

Animals infected with the FMD are significantly less productive, and pose a danger to other animals and livestock.

Any livestock products coming from a country with known cases of FMD are also subject to tight restrictions under international trade agreements, meaning an outbreak in Australia would significantly limit the industry’s global market access.

Vaccinating animals before the disease arrives would also jeopardise Australia’s FMD-free status, because the vaccines use a live virus.

Eliminating the disease once it’s here would eventually reinstate Australia’s FMD-free status, but would involve years of effort, billions of dollars, and the deaths of millions of animals.

Australia’s official response to a single case of FMD is to halt the movement of all livestock for at least 72 hours to track down and cull any infected animals.

Government modelling predicts a widespread FMD outbreak in Australia would cost the industry $80 billion and see the destruction of millions of animals.

A 2001 outbreak of FMD in the United Kingdom cost as much as $US21 billion ($48.6 billion in today’s terms) and saw as many as 10 million head of cattle euthanised.

Northern Australian cattle veterinarian Jack O’Donnell told The New Daily farmers were asking him every other day if they should sell all their cows for fear they could be worthless if there were an outbreak.

Is there actually a real threat?

In May, FMD was detected in Indonesia for the first time since 1986.

It’s harder for a country like Indonesia to pursue a radical elimination strategy because it has a high number of smallholder farms that can’t afford to cull animals, Mr Strong said.

The disease has since spread rapidly throughout Indonesia, including to tourist hotspot Bali, just a few hours’ flight from Australia.

Authorities have urged people travelling from Indonesia to declare any contact with livestock to prevent high-risk items from entering the country.

The concern is that holidaymakers could unknowingly pick up the virus on their boots or other item of clothing from an Indonesian farm and then pass it onto an Australian one.

But Mr Strong said the chances of that are “very, very, very low”.

The biggest threat is posed by the virus entering Australia in meat products, Mr Strong said.

The government this week announced that “viral fragments” had been detected in sausage products coming from Indonesia and China that have since been seized from warehouses and supermarket shelves.

“We keep stuff out. This is what we do,” Mr Strong said.

Australia’s biosecurity and border protections have been preventing FMD from migrating from countries like China, South Africa, Thailand, and Vietnam for 150 years, Mr Strong said.

He said the recent anxiety around the disease was likely the result of a hangover from COVID.

What are Australia’s biosecurity measures?

Federal Agriculture Minister Senator Murray Watt said the government is operating with increased vigilance in response to the Indonesian outbreak.

“We’re doing much more biosecurity screening at the airport of people, luggage, and parcels,” Senator Watt told farmers during an industry webinar on Tuesday.

Those that pose a high risk of being a vector for the disease are subject to “more intensive screening” of their person, luggage, and travel history.

The government has also introduced floor mats designed to eliminate the virus from the soles of shoes of returning travellers.

“There’s not one of these things that we’re doing that is the silver bullet,” Senator Watt said.

“But I accept that they will raise people’s awareness about the need to take action – and they will help.”

Senator Watt strongly rejected calls from the Opposition to implement a ban on travellers coming from Indonesia, citing an absence of expert advice to do so.

Senator Watt also expressed disappointment with sections of the media for incorrectly reporting that FMD was detected in Australia.

“And the reason that matters is that if we get an international reputation for having FMD, then that’s going to be devastating for our livestock industry and our export industry.”

‘Catastrophic’: Everything you should know about foot and mouth disease