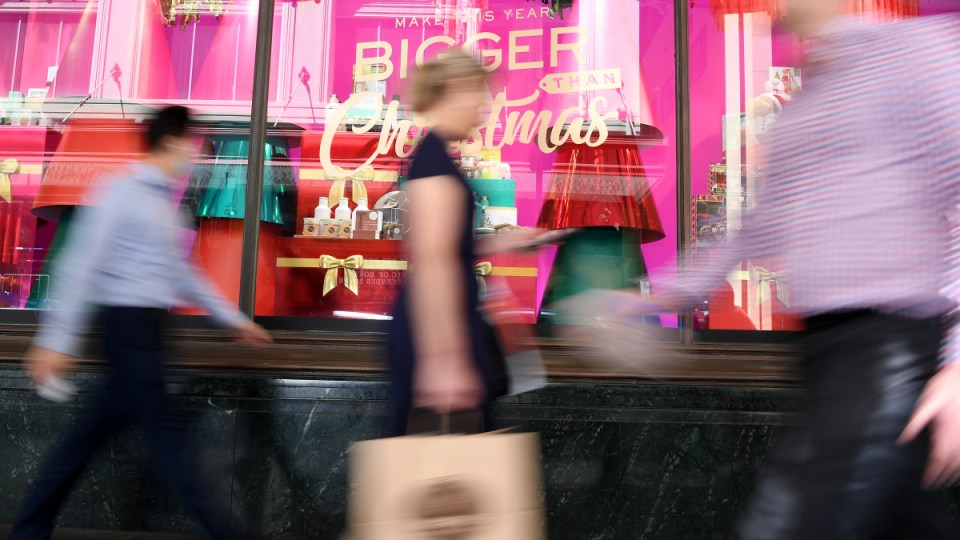 The majority of retailers are expecting to see sales growth this Christmas holiday period. Photo: AAP

Business and consumer confidence continues to grow, buoyed by the end of coronavirus restrictions in the nation’s major states and its capital.

The weekly ANZ-Roy Morgan consumer confidence index rose 0.6 per cent, the eighth gain in nine weeks, albeit with mixed results across the states.

“Since its recent low in early August,consumer confidence is up a touch over 10 per cent and is getting close to its long-run average,” ANZ head of Australian economics said.

“Confidence began to rebound last month as reopening plans were announced, and that continued in October as businesses saw those plans begin to become a reality,” NAB chief economist Alan Oster said.

NAB’s business conditions index also rose six points in October to 11 index points, rising back above its long-run average and with all its components rebounding.

“Conditions have held up fairly well through the lockdown period, but the resilience of businesses was beginning to wear thin in September,” Mr Oster said.

“So it is pleasing to see a quick rebound in NSW with restrictions mostly lifted.”

He said there is still scope for things to improve further in coming months, particularly in Victoria, but overall it was an encouraging result.

A large improvement in forward orders provided further evidence that a strong rebound in economic activity is under way.

More than half of respondents expect sales to bounce back rapidly post COVID-19 lockdowns, while 60 per cent say more than half of the Christmas sales will be digital-enabled in some way.

“Digital offerings are likely here to stay, but Christmas has alway been about the physical shopping experience,” Deloitte’s David White said.

“As the vaccine-led reopening and recovery takes hold and retailers welcome cashed-up customers back to their stores, they finally feel they have something to be optimistic about.”

However, retailers still face some challenges with more than half concerned about receiving sufficient stock for Christmas and nearly three-quarters worried that rising shipping costs will pressure their margins.

“Global supply chains have come under pressure as the world’s consumers emerge from the pandemic, and Australia is not immune from the fallout,” Mr White said.

Inflation indicators in both the consumer and business surveys remained elevated.

“”We are starting to see some price pressures, but these remain largely in the form of pressure on input costs,” said Mr Oster.

“These pressures should pull back as global supply chain disruptions ease and labour markets normalise, although this process may take some time yet.”

Even so, 90 per cent of retailers expect trading conditions to improve over the next 12 months.

“Clearly, the reopening of Australia both internally and internationally will be good for consumers and the economy,” he said.