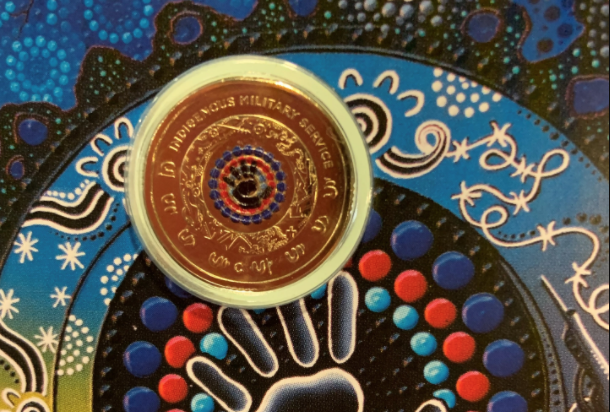 The new coin is set to enter circulation in April. Photo: ABC News

The Royal Australian Mint has launched a new coin to commemorate Indigenous Australians who have served in the military.

The $2 coin, emblazoned with artwork from Kalkadoon woman and artist Chern’ee Sutton, is designed to “tell the story” of Indigenous soldiers who serve, and have served, in the Australian Defence Force.

The coin – an Australian-first – was unveiled on Tuesday morning and will enter formal circulation next month before Anzac Day.

Ms Sutton said creating the artwork behind the design was a “huge honour”.

“I am so proud to have designed the artwork which recognises my brothers and sisters who bravely fought in every conflict Australia has been involved in,” she said.

“[They] have served Australia since before they were recognised as Australian citizens or allowed to vote.

“They fought for our country and they sacrificed their lives and I think it is so special to be able to acknowledge and recognise that.”

Ms Sutton has created several pieces for the Australian Defence Force in the past, and said the coin’s design “captured the journey Indigenous service personnel have taken through history”.

On the coin, a series of symbols depict soldiers leaving their communities and going to war, before a boomerang and a foot print depict personnel returning home and “stepping back onto their land”.

“I do hope people will get the coin in their change … and when they see it they’ll reflect on the sacrifices that were made,” Ms Sutton said.

The project took the young artist two years and required permission from the Defence Force to use camouflage colours in the design.

“We hope it will cause Australians to start thinking about the service to Australians that Indigenous military personnel have made,” he said.

“And if they don’t know much about it, do an investigation and explore.

“We’re certainly trying to make it a more prominent aspect of the Australian story.”

A commemorative version of the coin will go on sale this week, before it enters circulation in April.