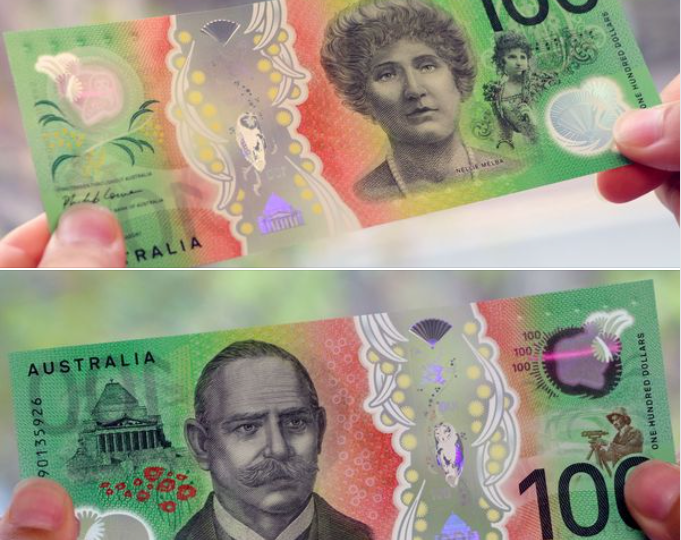 The Reserve Bank has released the final piece in its line of “Next Generation” Australian banknotes.

The new $100 note will enter circulation on Thursday, finally catching up to the other banknotes – with a new look and a security upgrade.

RBA governor Philip Lowe said the banknote program had taken 10 years to complete, with the new $100 the crowning glory.

“The release of the new $100 marks the completion of the decade-long program to upgrade the security of our banknotes. As a result, Australia continues to have some of the best and most secure banknotes in the world,” Mr Lowe said.

“We also continue to celebrate the outstanding contributions of two well-known Australians, Sir John Monash and Dame Nellie Melba, on the new $100.”

Sir John Monash was an engineer, soldier and civic leader recognised for his influence in the building-construction industry and service as a commander in the First World War.

Dame Nellie Melba was an internationally renowned soprano who performed in Australia, Europe and the US and taught at the Melba Memorial Conservatorium of Music, now the Melba Opera Trust.

What’s different about it?

The updated banknotes have been designed with top-to-bottom windows that provide additional security features. They are also more distinguishable for the vision-impaired.

The panel on the new “Granny Smith” has a reversing ‘100’ hidden in a picture of the Shrine of Remembrance – which Sir John was instrumental in building. There’s also a three-dimensional fan with colourful lines, representing Dame Nellie’s career as a performer.

All of the new notes have a ‘tactile’ function to help people who are blind or have low vision. On the new $100, there are five raised bumps on each of the long edges.

Remember when the ‘pineapple’ got a facelift?

The release of the new $100 follows an embarrassing debacle involving its younger cousin, the $50 note.

The RBA was left blushing in May after a sharp-eyed consumer spotted a tiny but significant spelling error on the new ‘pineapple’.

Under a microscope, the $50 note revealed a typo in the reverse text, which features excerpts from Edith Cowan’s maiden speech to Western Australian Parliament.

The RBA promised to correct the error in the next run, and the $100 note has hopefully gone under the microscope before its release on Thursday.

When will we see it around?

Reserve Bank Assistant Governor Lindsay Boulton said Australian’s should not expect to see the new $100 regularly for some time.

“We anticipate it will take some time for people to regularly see the new $100 banknote in circulation as our largest-denomination banknote is generally used as a store of wealth rather than for transactions,” Ms Boulton said.

What happens to the old notes stashed under the bed?

Existing $100 banknotes remain still legal tender and can continue to be used – in fact, the RBA fully expects both old and new to co-circulate for some time.

“In fact, all our banknotes, including paper banknotes issued many years ago, remain legal tender in Australia,” she said.

Will machines accept them?

The RBA said it has worked with “banknote equipment manufacturers” and retailers to make sure ATMs and other authenticating machines can handle the upgrade.

Can I collect them all?

If you’re desperate to complete the set with the $100 note, and have the equivalent legal tender, details can be viewed on the banknotes website.