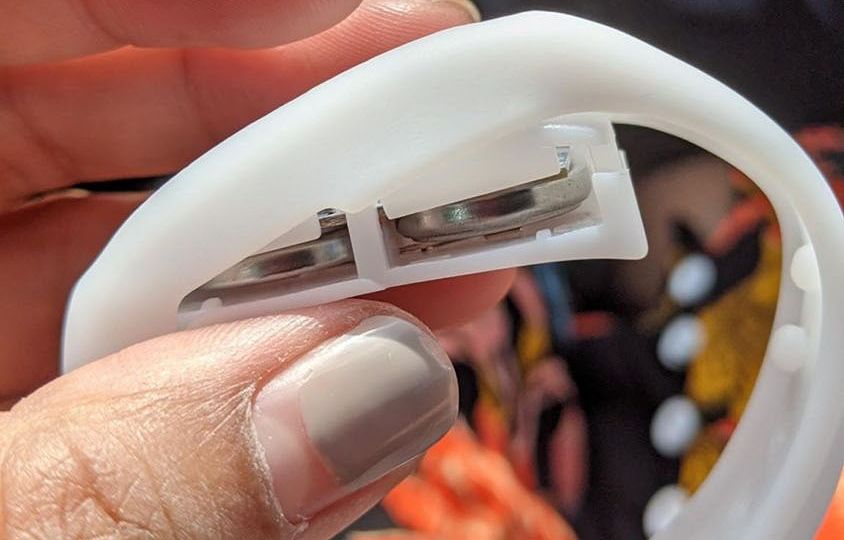 The button batteries were easy to remove from the wristband. Photo: ABC

Free wristbands containing button batteries that were handed out before Saturday night’s AFL grand final in Brisbane have been recalled due to child safety fears.

More than 31,000 of the light-up wristbands were distributed to fans at the Gabba stadium where Richmond defeated Geelong to win their second consecutive premiership.

A product safety recall has been issued, with details released on the Australian Competition and Consumer Commission website.

“If young children gain access to the button batteries and ingest them, they may suffer internal burn injuries, which can result in serious illness and even death.

“In addition, the batteries may pose a choking hazard to young children.”

The ACCC has advised the wristbands should be thrown away where young family members would have no chance of retrieving them.

“Consumers … should immediately dispose of the wristband by placing it in an outside household rubbish bin, out of reach of children,” the statement said.

Wristbands recall was ‘about time’

Three Australians have died since 2013 after swallowing button batteries.

Last week, the Conway family from the Gold Coast shared their heartbreak after their three-year-old daughter Brittney died in July after ingesting one of the tiny batteries.

The Gabba wristbands used LED bulbs to create different colours at the first AFL grand final to be held outside of Melbourne.

Kidsafe Queensland chief executive Susan Teerds said it was “about time” but their distribution “should never have happened in the first place”.

“A lot of people don’t know how dangerous these batteries are, so we still have a long way to go to raise awareness,” Ms Teerds said.

“These sorts of wristbands aren’t covered by any legislation and with their 10-year lifespan they are very dangerous for a long time.”

Ms Teerds added that the ACCC was proposing to the federal government that all Australian products with button batteries must have a secure, child-resistant compartment.