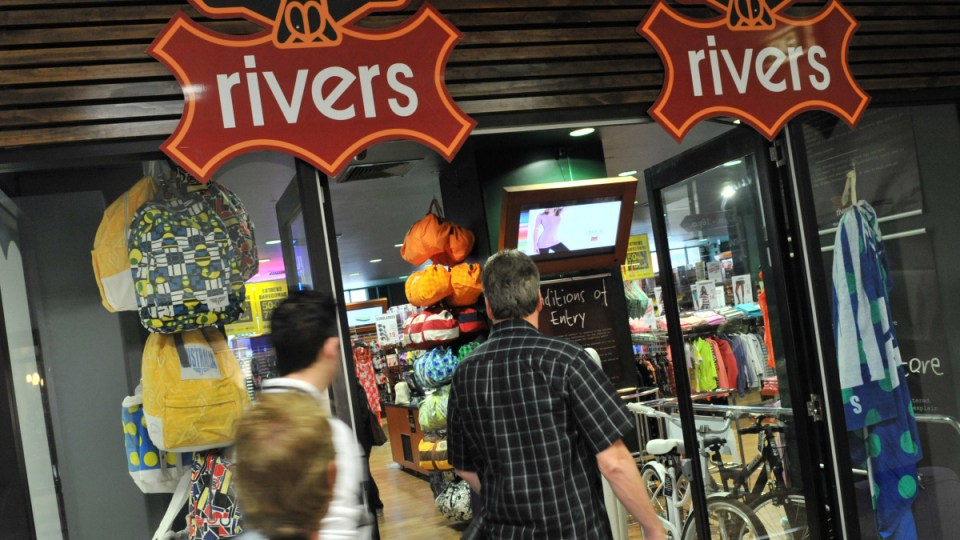 Mosaic owns nine big brands, including Rivers. It is to shut up to 500 shops. Photo: AAP

One of country’s biggest retailers says it will shut up to 500 shops across Australia after announcing a net loss of $170 million in the past financial year.

Mosaic Brands owns midstream fashion brands Katies, Rivers, Millers and Noni B, among others, and has 6000 workers across Australia.

But the combination last summer’s bushfire crisis and the ongoing COVID pandemic has hit the company’s bottom line hard.

It said it would shut 300-500 shops within the next year to two years.

Mosaic Brands said the leases on nearly 80 per cent of its 1333 stores would expire within two years. More than 100 Mosaic shops are in Westfield shopping centres that were closed by landlord Scentre Group amid a rent dispute last week, leaving hundreds of workers needing to be redeployed.

Managing director and chief executive Scott Evans said Tuesday’s results did not reflect the group’s consistent growth over the past four years. Forecasts for the year had been “utterly derailed”, he said.

“First by the devastating bushfires, which directly impacted 20 per cent of our store portfolio over the Christmas period, then by COVID-19, which saw us close all 1333 stores for nine-and-a-half weeks, including the peak Mother’s Day period,” he said.

“There is no road map to navigate these circumstances, but our operational priorities have been ensuring team and customer safety, reducing inventory and maintaining a strong cash position.”

Times were tough for Australian retailers, even before the virus hit.

In May, PAS Group – the parent company behind clothing brands Review, Black Pepper and Yarra Trail – entered voluntary administration. Discount chain Target is another to have said it will close dozens of stores as it struggles to compete in a tough market.

Moscaic Brands board chairman Richard Facioni said Mosaic was one of the first national retailers to close in the early days of the pandemic.

“Many of our customers and team members are in the most vulnerable segment that COVID-19 attacks,” he said.

Like many retailers, online sales has been a bright spot for Mosaic during the recent troubled times. The company had $93.7 million in web sales for the year – up 35.9 per cent in the second half of the financial year.

Katies, Rivers owner to shut up to 500 outlets