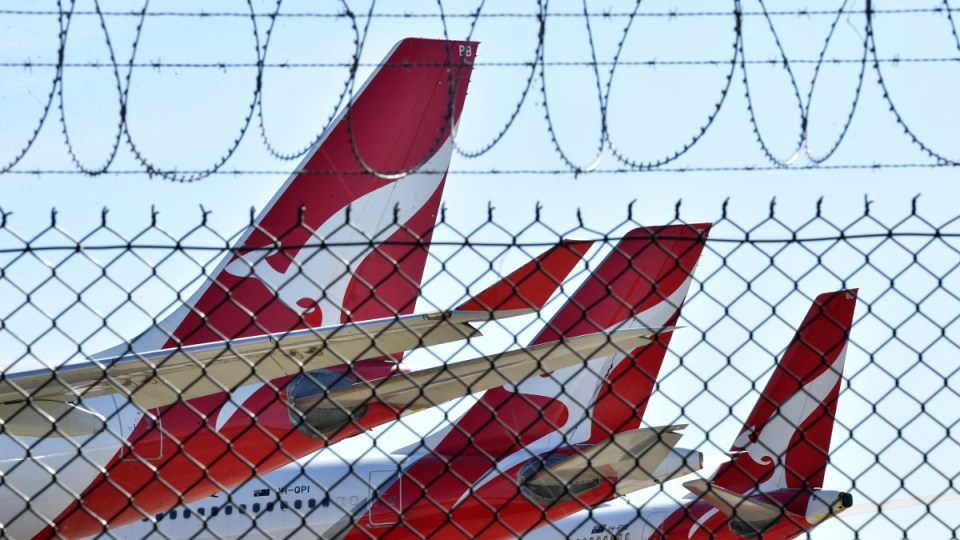 Qantas has extended its shutdown, leaving 25,000 employees in a state of limbo. Photo: AAP

The price of a plane ticket between Melbourne and Sydney could fall as low as $19 as Qantas CEO Alan Joyce flags cheap flights once the coronavirus crisis eases.

In an update to investors on Tuesday, Mr Joyce said lower airfares would stimulate the domestic sector, with some Australians experiencing “pent-up demand” to travel interstate and visit family and friends.

“Airfares could be half of what they are today,” he said.
“For example on Melbourne-Sydney you could see Jetstar fares of $39. You could see $19 airfares and we will still cover our cash costs.”

The airline also announced it had borrowed another $550 million while extending flight cancellations and its stand down of thousands of staff.

Existing domestic flight cancellations would be extended until the end of June.

International services will remain grounded until the end of July.

The airline warned there was no guarantee flights would resume in August.

Qantas did, however, state it could lift domestic capacity with a week’s notice.

It noted governments had already started to ease some COVID-19 restrictions and travel might be permitted again before the end of July.

Any decision to increase domestic flight numbers will be dependant on customer demand.

Mr Joyce said the group was in a strong position, but there was no way of knowing when travel restrictions would end.

“Australia has done an amazing job of flattening the curve and we’re optimistic that domestic travel will start returning earlier than first thought, but we clearly won’t be back to pre-coronavirus levels any time soon,” he said.

“With the possible exception of New Zealand, international travel demand could take years to return to what it was.”

Customers to be contacted directly

Both Qantas and Jetstar passengers booked on the newly-cancelled flights would be contacted directly and “offered alternatives”, Qantas said.

The company also said it would improve its travel credits – offered to ticket-holders whose flights are cancelled – “in response to feedback” from customers.

“Customers booked on Qantas and Jetstar flights disrupted by the coronavirus crisis will be able to split travel credits across multiple future bookings,” the airline said.

“This is on top of an extended period of time to use the credit.”

Customers who have booked through third-party services or agents will need to contact those companies directly.

Employees to remain stood down

Extending flight cancellations means extending the stand down of Qantas and Jetstar workers, with no work for 25,000 staff until the end of June.

“The impact of this stand down is deeply regrettable,” Qantas said.

“But [it] has been greatly softened by the Australian government’s JobKeeper program, which the government commenced paying several weeks ahead of the official payment start date.”

Qantas staff can also use annual and long service leave during the stand downs.

The global coronavirus shutdown has wreaked havoc on airlines, and the measures announced by Qantas are designed to maintain its liquidity.

In March the company raised $1.05 billion loans against seven of its 787-9 aircraft.

On Tuesday it said it had secured a further $550 million against three more of the planes.

It also flagged the possibility of raising more money against the “$2.7 billion in unencumbered aircraft assets” it owns, if needs be.

The announcement comes as potential buyers circle the wreckage of rival airline Virgin, which fell into voluntary administration on April 21.

$19 flights: The future of Melbourne to Sydney travel