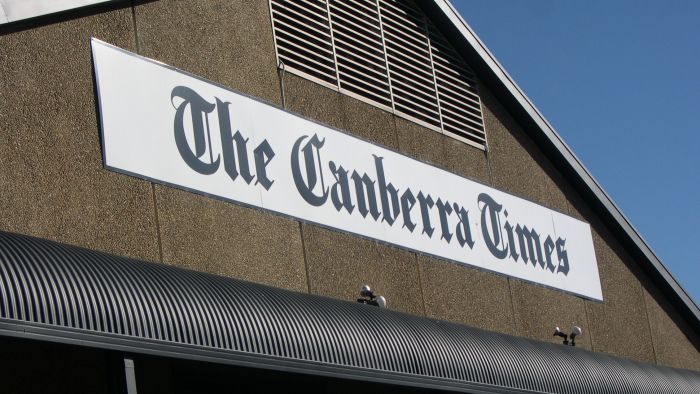 The company will continue to publish daily papers such as The Canberra Times.

The country’s largest regional media company will stop publishing some of its newspapers and stand down workers as it grapples with coronavirus.

Australian Community Media, which owns titles including The Canberra Times and the Newcastle Herald, will also shut printing sites in four states and territories.

“At this stage it is not possible to say when we will be able to resume normal operations.”

It is the latest in a string of cutbacks announced by media companies as the fallout from the coronavirus outbreak spreads.

On April 1, News Corp said it would suspend printing of 60 community newspapers in NSW, Victoria, Queensland and South Australia. It blamed the move on a rapid decline in advertising after restrictions were placed on real estate auctions and home inspections, and the forced closure of event venues and dine-in restaurants during the coronavirus pandemic.

The papers will still be published online.

In March, the Sunraysia Daily – the only daily paper in Mildura, in Victoria’s north-west – said it would also close. It was in its centenary year.

Staff were also stood down at other papers owned by the same company.

ACM said it would stand down some employees and reduce the hours of others.

The shutdown is expected to last until at least the end of June.

Non-daily newspapers will no longer be printed and instead run reduced coverage online.

Daily publications such as The Canberra Times, Newcastle Herald and Ballarat Courier will still be printed.

Weekly agriculture papers such as The Land and Queensland Country Life will also continue printing.

The company has given notice to more than 30 landlords of offices across the country that it intends to exit leases to reduce rental costs.

Printing sites in the ACT, South Australia, Victoria and NSW will be shut.

Mr Catalano said the company intended to register for the JobKeeper payment as soon as it could.

“We are closely monitoring developments and will keep employees updated as things change,” he said.

ACM publishes more than 160 publications across the country.