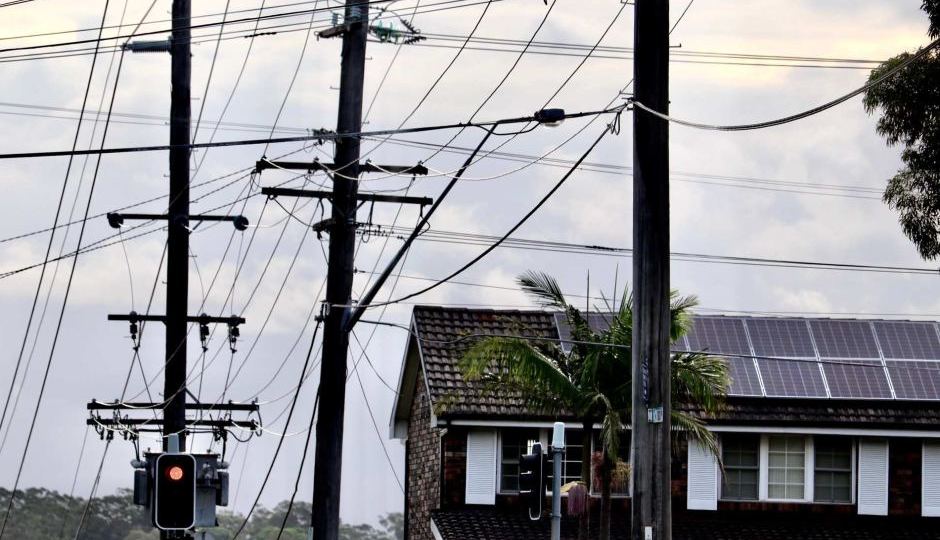 Most households' circumstances have completely changed in the past month. Photo: ABC News/John Gunn

The Schroeder residence has become a little crowded since the coronavirus lockdown.

Normally Katinga Schroeder shares the house with her husband and daughter, but her son has been forced home from the United States where he was attending college in Lexington, Kentucky.

“He is still on Kentucky time, so up in the early hours of the morning, lights on, computer on, connecting to classes via Zoom, charging his phone and his laptop, watching Netflix in downtime and cooking at odd hours,” Ms Schroeder said.

Her daughter, Rachael, is studying for her HSC as best she can from home.

“She is charging devices and connecting to classes via Canvas, watching Netflix in downtime or Facetiming with friends,” her mother said.

Ms Schroeder used to go to choir every week. Now she’s joining it online, as well as working from home, charging a laptop and a phone, and spending more time on the landline due to “patchy” mobile coverage.

Now she is waiting for the bill shock.

Her back-of-the-envelope calculation is sobering.

“With people at home 24/7, cooking a lot more, using the dishwasher a lot more, the coffee machine more, watching more TV, doing everything we would normally do face-to-face via Skype or Zoom, it will cost each household potentially up to 50 per cent more during this pandemic,” she said.

Recently, she wrote to the New South Wales Energy Ombudsman outlining her concerns.

“My point is, with all of us expected to do everything from home for the next three months, the burden on households will be noticeable, especially through their energy bills,” she wrote.

“Will there be any relief?”

It is a concern shared by a coalition of consumer, community, church and welfare organisations, including the Australian Council of Social Service, The Brotherhood of Saint Laurence, the Combined Pensioners and Superannuants Association, Consumer Action Law Centre, the Ethnic Communities Council, the Physical Disability Council of NSW, the Public Interest Advocacy Centre, Uniting Communities and the St Vincent de Paul Society.

“Without better support, this winter many families [will] face a choice between heating their homes and having enough money for food and rent,” said Craig Memery, head of energy policy at the Public Interest Advocacy Centre.

This coalition wants Federal government funding and stronger commitments from energy businesses to help people afford their energy bills during the COVID-19 crisis.

Cassandra Goldie, chief executive of peak welfare lobby group the Australian Council of Social Service, said it was “incumbent on companies who are providing essential services to put people first [and] to provide relief and a level of comfort during this uncertain and unprecedented period”.

The industry has already put in place a range of measures to assist customers in hardship.

Energy networks across New South Wales, Victoria and South Australia have also announced they will defer network charges for some small business and residential customers enduring hardship as a result of the COVID-19 pandemic.

The Australian Energy Regulator and governments have taken a number of steps to soften the bill shock, such as a commitment by the NSW government to boost an Energy Accounts Payment Assistance Scheme.

And the Australian Parliament has legislated the biggest emergency support package in the nation’s history to support employment and boost assistance to the jobless.

But the community and welfare groups say more needs to be done.

“These are welcome and necessary steps,” Mr Memery said.

“But temporarily suspending disconnections and debt collection won’t stop winter energy bills for many households jumping by $200 a month.”

According to welfare groups, energy retailers have had to close call centres in Australia and overseas because of coronavirus-related health and safety risks.

They want the government to consider supporting energy businesses to increase their customer support — a measure they maintain will create local jobs at a time of rising unemployment — in return for commitments from energy retailers to give further assistance to customers.

Working from home and bracing for the bill

Tim Newman, 28, is now working from home as an audio visual technician from Dulwich Hill in Sydney — and awaiting the next energy bill.

“I am expecting at least a degree of bill shock,” he said.

Mr Newman was working at the University of Sydney and his housemate was also on campus studying before the lockdown.

“And the workday bleeds into the evening when you are home.”

And “tonnes” of tea and coffee means the kettle is getting a hefty workout.

“I can’t quantify the increased use of power in my house.”

But he still counts himself lucky.

“A whole lot of people in my team were working casually on events and the events have been suspended. They are all out of work,” he said.

“There are a bunch of people on fixed-term contracts; they will end and may not be renewed.”

Mark Henley from Uniting Communities said the newly unemployed are among his organisation’s biggest concerns, along with low-income private sector renters, people with disabilities and casual workers, many of whom will not qualify for the JobKeeper wage subsidy.

How the coronavirus lockdown will drive up electricity costs for households