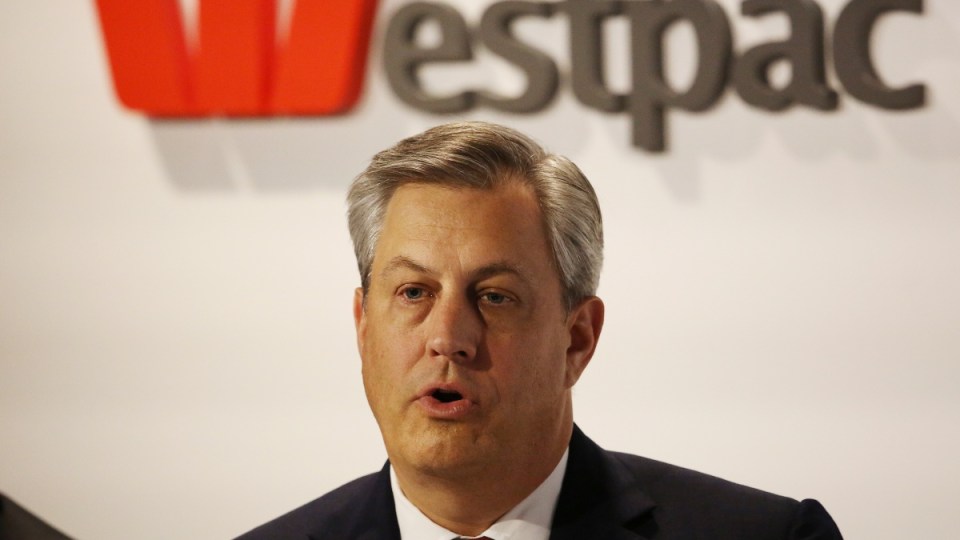 Westpac's chief executive Brian Hartzer will step down, with his resignation effective next month. Photo: AAP

The Westpac board has held a marathon crisis meeting amid increasing pressure for it to take responsibility for the money-laundering scandal that has engulfed the bank this week.

The pressure is coming from the very top, with Prime Minister Scott Morrison stopping only just short of calling for heads to roll.

“They have got to take the calls that I think reassure people’s confidence in the bank’s systems and the processes they have, and that there is accountability,” he told Melbourne radio 3AW on Friday morning.

On Wednesday, financial crime watchdog AUSTRAC announced it was suing the nation’s second biggest lender for 23 million breaches of money-laundering and counter-terrorism legislation.

Westpac shares sank to a fresh 10-month low on Friday, with as much as $6.5 billion wiped from the bank’s value in the two days since the scandal emerged.

Chairman Lindsay Maxsted said the board of Australia’s second largest bank, which met for most of Friday to discuss the scandal, unreservedly apologised for its failings.

The bank will update investors “in coming days” over how the money laundering and child-exploitation scandal occurred – and what it is doing to make sure it never happens again.

“The notion that any child has been hurt as a result of any failings by Westpac is deeply distressing and we are truly sorry,” Mr Maxsted said.

“The board unreservedly apologises.”

Chief executive Brian Hartzer, who has faced growing calls for his resignation, survived the meeting.

Mr Morrison had already urged the board to “reflect deeply” on the Mr Hartzer’s – although the PM told 3AW that “it’s not for politicians or frankly, radio broadcasters either I’m sure you’d agree, to decide who goes and who’s accountable”.

Also on Friday, the Australasian Centre for Corporate Responsibility and Ethinvest joined those baying for the board to pay for its supposed inaction.

The pair issued a joint release calling for investors to reject Westpac’s remuneration report at the annual meeting on December 12. Such a move would subject the board to a second strike and potentially clear the decks.

ACCR and Ethinvest also specifically called for the bank’s risk and compliance committee chair Ewen Crouch to be sacked.

“The allegations that Westpac failed to identify payments potentially connected to child exploitation in South-East Asia are particularly disturbing,” they said.

AUSTRAC’s claims include that the bank has known since 2013 of child exploitation risks associated with frequent small payments to SE Asia but did not act appropriately until 2018 and still does not monitor all channels for transfers potentially linked to the live-streaming of child abuse.

Child protection agency Bravehearts has withdrawn itself as a Westpac customer following the revelations.

The Australian Federal Police has confirmed it is assessing the matter.

“The AFP can confirm it has been working with AUSTRAC and is aware of the individuals identified [who are] suspected of suspicious transactions which may relate to child sex offences,” it said in a statement.

Commonwealth Bank’s then CEO quit in 2017 after AUSTRAC accused it of 53,000 breaches of money laundering and terrorism-funding laws. CBA eventually settled the case for an Australian corporate record $700 million fine.

Westpac also faces another battle, with law firm Slater and Gordon announcing class actions against it and the ANZ for selling “junk” insurance policies to unsuspecting customers.

The firm claims the big banks sold worthless credit card insurance to customers they would never have been eligible to claim against.

The action comes just two days after the firm reached a $49.5 million settlement with the NAB over the same issue.

‘I am not afraid’: The modern unknown soldier risks it all in Ukraine
Energy market reform will be a big boost for emissions reductions: Chris Bowen
Greens sign up for Labor’s looming jobs-and-skills summit as Liberals stick with boycott
Joe Biden’s $430b green victory for the environment
China cementing its Thailand ties with joint military exercises
NRL: Titans frantic to end 10-game losing streak as Manly showdown looms
Ask the Expert: Savings and cash flow tips to grow your wealth
Today's Stories