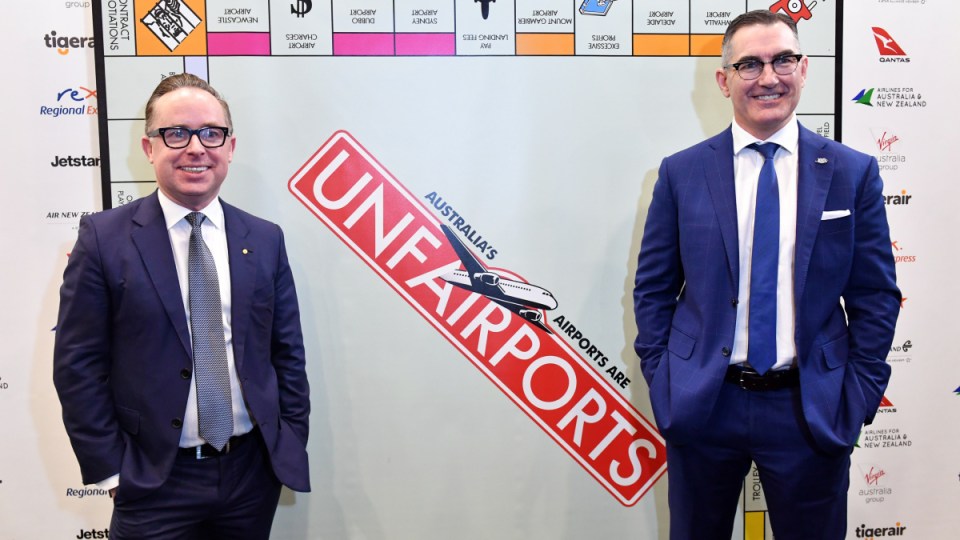 Australia’s monopoly airports have fired another shot in their war with the nation’s airlines, alleging the two major carriers are ripping off passengers.

The Australian Airports Association (AAA) has claimed that passengers travelling between Sydney and Melbourne are paying 106 per cent more than they were in 2010, thanks to Qantas and Virgin abusing their duopoly position on the route.

But a closer examination of prices indicates the airports may have cherry-picked the date in a bid to discredit the airlines.

Citing data from the Bureau of Infrastructure, Transport and Regional Economics (BITRE), the AAA said the average cheapest available return airfare between the two cities rose from $79 in 2010, to $163 in 2018 – a 106 per cent increase. (In real terms (adjusted for inflation), the AAA claimed fares were still 73 per cent higher than they were in 2010.)

The AAA said the numbers confirmed “the impact of a lack of competition in Australia’s domestic aviation sector”.

Its attack came exactly a week after airports had a victory of sorts, with the release of a Productivity Commission (PC) report dismissing the need for tighter regulation of Australia’s major airports.

The PC report’s conclusions came despite repeated calls by the ACCC to rein in the airports’ monopoly position, and has been at the centre of a bitter spat between airports and airlines who allege anti-competitive behaviour by the airports.

But Professor Graeme Samuel, the chair of aviation lobby group, Airlines for Australia and New Zealand (A4ANZ), said the AAA had chosen “selective and misleading data” to deflect attention from “the real issue of monopoly airports gouging the travelling public”.

Professor Samuel said the AAA had conveniently picked 2010 – the year after the onset of the global financial crisis, when air travel had taken a hammering.

It was also the year, Tigerair started flying the route with highly aggressive pricing.

Since 2013, the average SYD-MEL fare has increased just 6.4 per cent, according to the BITRE figures.

“But even then, their stats don’t mention the fact that, since 2010, airfares to Brisbane are down 22 per cent, and airfares to Perth are down nearly 20 per cent,” Professor Samuel said.

“Or that, over the past decade, airfares are 40 per cent lower overall, while airport charges rose 25 per cent.”

He also noted that it wasn’t a terribly cosy duopoly “when one of the airlines [Virgin] is battling to turn a profit“.

Using figures from the Australian Bureau of Statistics, the ACCC and BITRE, Qantas compiled the following graph contrasting airline profitability with that of airports. 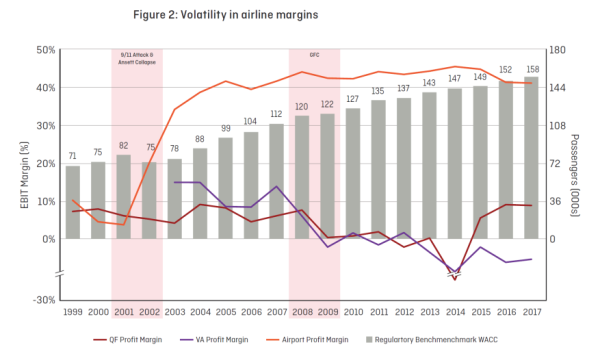 According to the ACCC’s 2017-18 Airport Monitoring Report, the Sydney, Melbourne, Perth and Brisbane airports were among the six most profitable in the world, and that their revenue per passenger had increased by 25 per cent over the past decade.

It also noted that while the profit margins on car parking were on a downward trend, the four airports still reported margins on parking operations of between 50 and 70 per cent.

Aviation industry commentator and chairman of Strategic Aviation Solutions Neil Hansford said the slanging match between airlines and airports was “like watching two convicted criminals arguing over who is more virtuous”.

But Mr Hansford said in this case the airports’ argument looked thin, maintaining consumers were clearly “not being ripped off”.

“Effectively, on an inflationary basis, airfares are 15 per cent cheaper than what they were 15 years ago,” he said.

“I can tell you the route that I fly often, from Newcastle to Melbourne, has not changed in five years.”

He said Qantas was determined to not let its market share on the route fall below 60 per cent, “which was a big incentive to keep prices competitive”.

But Mr Hansford noted his assessment related to “base airfares”.

What had changed in that time was the introduction by airlines of extras and bundles, such as food, baggage and better seat options, which were not as prevalent a decade ago.

In a statement to The New Daily, Virgin Australia said it was committed “to offering fares that provide value to our customers on the Sydney-Melbourne route”.

But it also noted “airport fees and charges play a role in the prices that airlines can offer on any given route, and these costs are continuing to rise”.

A recent briefing by the International Air Transport Association on the cost of air travel in Australia showed that between 2007 and 2017, airport passenger charges on the average airfare from Australia’s airports increased by more than 60 per cent.

However, the PC’s 2018 Impact of Airport Charges on Airfares report calculated that Australian airport charges represent about 8 per cent of the average domestic Australian all-in airfare.

The New Daily called Senator Glenn Sterle, who chaired a Senate committee into regional flight prices, for a response, but did not receive an answer before deadline.

Airports fire another salvo in their war with the airlines