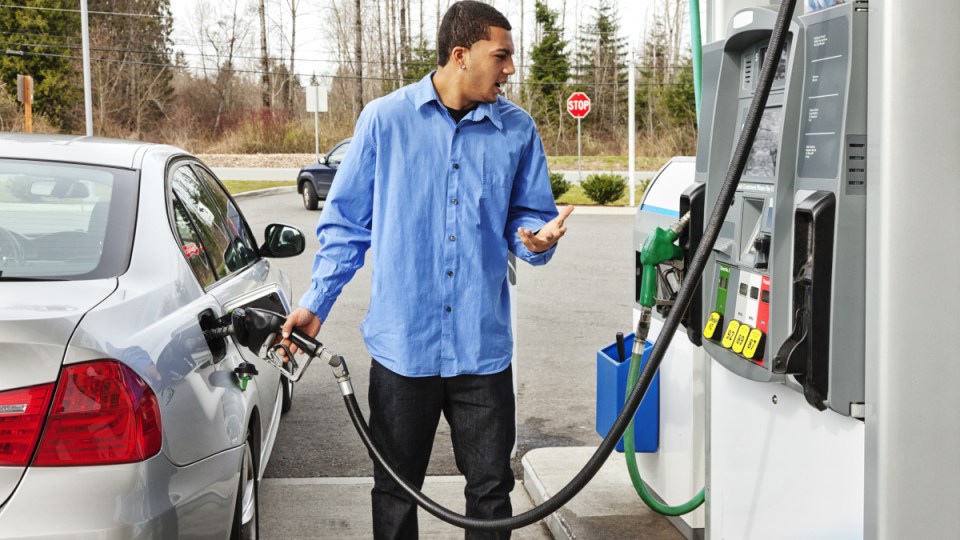 Oil companies have the used the Saudi oil attacks as an excuse to boost their margins. Photo: Getty

Oil companies have used the drone attacks on Saudi Arabian oil fields as an excuse to rip off Australian motorists.

Drivers are set for a shock at the bowser this week, with petrol prices tipped to go up as high as $1.74 per litre in some capital cities – by jumping as much as 30 cents in one day.

Fuel analysts have told The New Daily that some sneaky service stations have started slugging motorists an extra 30 cents per litre since the oil field attacks.

The hike comes despite wholesale costs temporarily rising by no more than eight cents per litre.

While rising to $US67.68 a barrel on the Monday after the September 14 attack, the price of the global benchmark Brent crude oil has since fallen to $US59.67 a barrel – 55 cents lower than the price before the attack.

But that hasn’t stopped oil companies from ramping up prices, according to Geoff Trotter, general manager of fuel analytics firm FUELtrac.

“In Sydney over the weekend, they tried to go to 173.9 per litre, and in Brisbane today they’re trying to get up to 171.9,” Mr Trotter told The New Daily.

“But this is at a time when the underlying wholesale price has fallen – so it’s rather opportunistic of them now to be raising prices.” 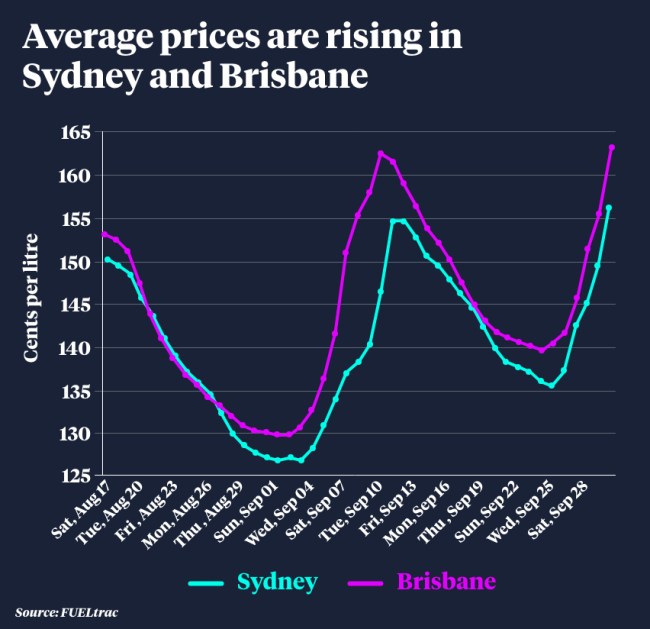 Melbourne motorists were the first to feel the bowser pain, with prices reaching as high as 171.9 cents per litre within days of the attacks.

The city’s average petrol price was a fraction above 130 cents per litre on Friday, September 13, but rose to roughly 155 cents a week later, and kept rising to a peak of just under 165 cents on Tuesday, September 24.

Mr Trotter said “oil companies in Melbourne decided to go to the top price of 171.9 before they’d actually incurred any increase in their wholesale price”.

Mr Trotter said prices in Sydney and Brisbane were still rising, with companies in the Harbour City hoping to hit a new peak of 173.9 cents per litre – roughly 20 cents above the average petrol price in each city on the day of the attacks.

Traders in Brisbane are tipped to be heading for a new price peak of 171.9 cents per litre.

Mr Trotter said these price hikes came despite wholesale prices only rising by a maximum of eight cents per litre, before then falling by four cents per litre. 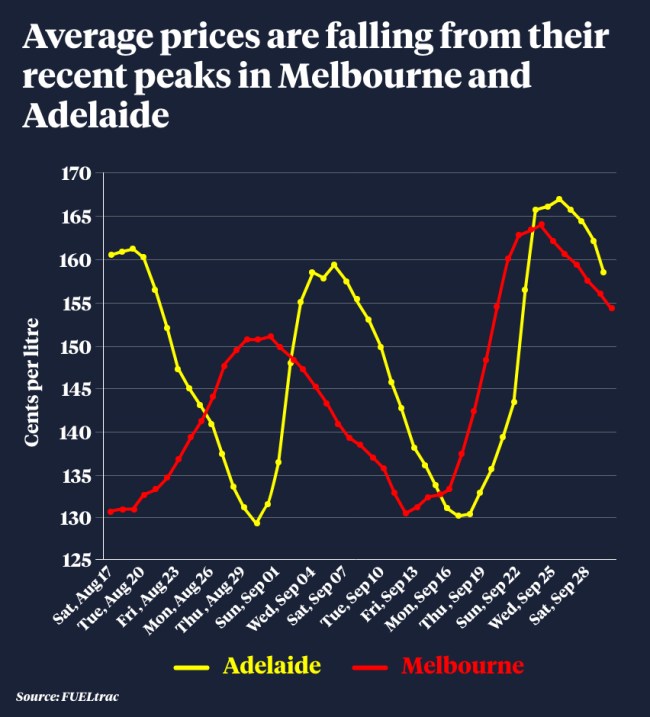 The worst looks to be over in Adelaide and Perth, though. There, prices are slowly come down after a peak of 169.9 cents per litre.

While it isn’t uncommon for oil companies to use economic shocks as an excuse to bump up their profit margins, Mr Trotter said “the point of difference this time is they’ve overshot it”.

“You’ve got people driving to work [in Brisbane] today who would have gone past 135.9 – and that same service station tonight will be 171.9.”

To make matters worse, Mr Trotter said oil companies take much longer to bring prices down after an economic shock subsides than they do to ramp up prices.

NRMA spokeswoman Bridget Ahern agreed some oil companies had moved to increase their profit margins in the wake of the attacks.

But she told The New Daily she was hopeful for some hip pocket relief soon, as the cost of Singapore Mogas – which heavily influences Australia’s petrol prices – had fallen to $73 a barrel after rising over the past fortnight from $70 to $84.

“Unfortunately some outlets do hike up their prices, which we don’t think they should be doing,” Ms Ahern said.

“But what we can do as consumers is choose the one that’s cheaper.”

Ms Ahern said independent petrol stations typically offered much cheaper prices, primarily because they were run by mum-and-dad operators and located away from main roads.