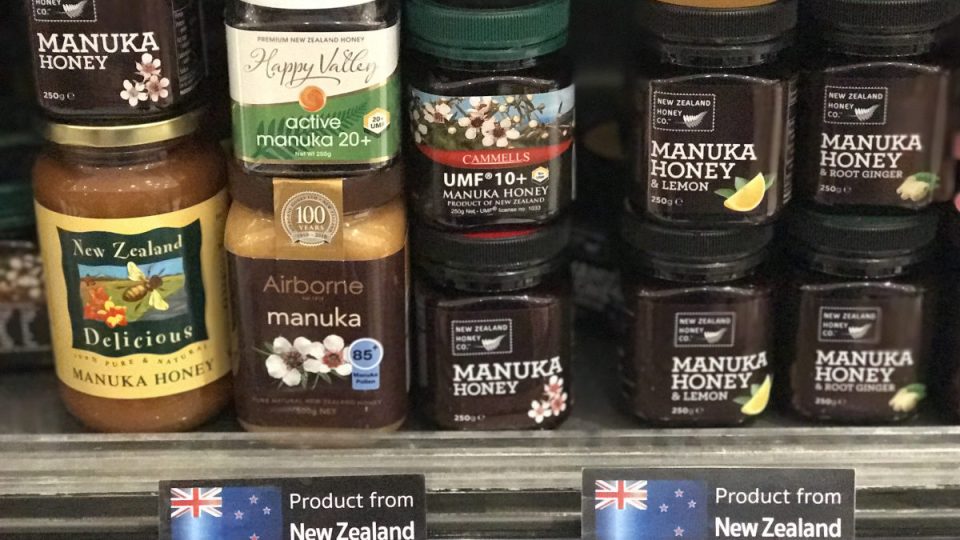 New Zealand has staked its claim over Manuka honey, but Australian honey producers are fighting back. Photo: Getty

A battle over honey is threatening to turn Australia’s relationship with neighbouring New Zealand sour.

Honey producers in New Zealand have applied to trademark the term “Manuka honey” in China, a move that if successful would prevent their Australian counterparts from using the term and lock them out of the lucrative market.

The bid is spearheaded by the Manuka Honey Appellation Society, with more than $5 million in financial backing from the New Zealand government.

The company has failed in previous bids to trademark the term in the UK and the European Union, and Australian honey producers are fighting back – arguing that the trees the honey is derived from originated in Australia.

The buzz about Manuka honey

Manuka honey has become an expensive and sought-after product around the world, thanks to its purported medicinal properties.

Manuka honey sells for as much as $400 a kilogram, depending on the strength of its active ingredient, methylglyoxal.

The honey has been produced in Australia and New Zealand since the late 1800s, when European honeybees were introduced to the region and suckled on the nectar of native Leptospermum scoparium flowers.

‘Mānuka’ is the Māori term for the L.scoparium tree, a fact that New Zealand honey producers argue gives them exclusive rights to use the term “Manuka honey”.

“The real core of the debate is in whether Manuka honey is just a descriptive term for a style of honey, which would mean that the Australians can use it as well as the New Zealanders,” Bond University Professor of Law William Van Caenegem said.

“Take kiwifruit for instance. That was a term that was actually developed in NZ, but it’s then become a worldwide descriptor of that sort of fruit.

“Kiwifruit is grown in Europe, and they can still call it that even though it doesn’t come from New Zealand.”

New Zealand’s hopes hinge on whether they can convince Beijing that “Manuka honey has become explicitly associated with that kind of honey coming from New Zealand”, he said.

“I think they may be afraid of how good our Manuka is, especially the Manuka we produce in NSW and Queensland, because the active ingredient is much stronger,” Mr Bourke said.

While Australia has 84 different types of Manuka tree, New Zealand has just one, Mr Bourke said.

“The one they’ve got in New Zealand is very nice, but it doesn’t go that high in its activity,” he said.

Our honey is a lot better than theirs.’’

“If we combine all of the Manuka we produce in Australia and New Zealand, we still wouldn’t be able to supply the world,” he said.

The New Zealand government’s decision to pump millions of dollars into a private company’s trademark push has created an unfair and “lopsided” battle, he said.

The Australian government has thus far declined to directly involve itself in the stoush.

A spokesperson for the Minister for Agriculture Bridget McKenzie told The New Daily that the Nationals MP would “continue to back Australian Manuka Honey producers in every way possible, and continue to push for increased market access for their high-quality, safe, sustainable and nutritious honey around the globe”.

The government has given a $165,000 grant to the the Australian Manuka Honey Association to “support trade promotion”, the spokesperson said.

The AMHA is “opposing them and keeping a world-wide watch on any other jurisdiction” that New Zealand may look to mount the claims in, he said.

“Very simply, the Manuka plant is native to Australia. The term Manuka has been used – we’ve traced it back almost 200 years in Australia – and it’s likely that the Manuka plant itself actually originated in Tasmania and found its way to New Zealand a long, long time ago,” Mr Kordic said.

He said the AMHA is “in discussions” with the Australian government “as to how they might be able to help us”.